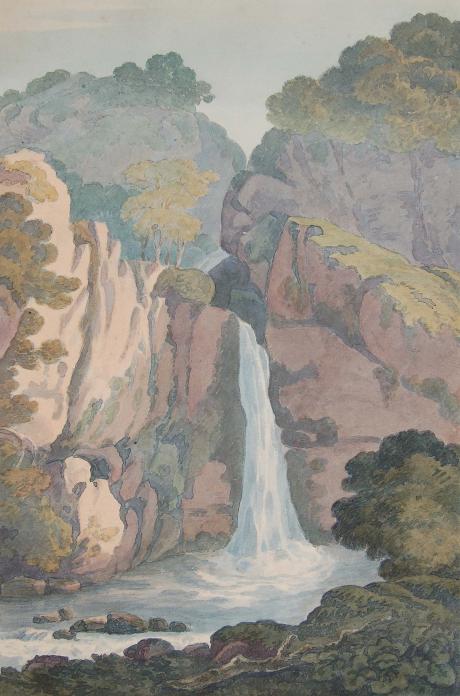 This is the deepest gorge in south-west England, and stretches a distance of about 2.5 km (1.5 miles) from the spectacular "Devil's Cauldron" whirlpool at the bridge end to the very fine 30-metres-tall "White Lady Waterfall" at the other end. There are excellent beautiful walks from one end of the Gorge to the other, alongside the River Lyd and on the winding upper path that gives a view steeply down into the Gorge through the very tall and slender trees that stretch upwards to find the light. Situated near Oakhampton North Devon.During the 17th Century Lydford Gorge was infamous for being the hide-out of a large family of outlaws, the Gubbins, who terrorised the neighbourhood and stole sheep from the farms of Dartmoor. In the years at the beginning of the 19th Century during the war against Napoleon of France, Lydford Gorge became, for many travellers, a replacement for the Grand Tour of Continental Europe, and was much appreciated and valued for its grandeur and beauty. A picturesque stone bridge crosses the River Lyd just south of the village of Lydford. At this point the river often falls fast and furious as it tumbles down into a beautiful ravine roofed by large trees and sided by carpets of wild flowers and garlic. Here the river with its boulders, dark pools, cascades and long rapids is endlessly changing, but always beautiful. Sometimes, when the river moves more slowly its mood becomes reflective and you can stand on the bridge watching streams of sunlight moving around the waters like a dazzling golden beams. The light summer breezes sway willow branches, which with other trees cast their reflections on the sun-kissed water.The descent into the gorge from the Lydford end is steep, for this is the deepest gorge in south-west England. It stretches from the stunning Devils Cauldron Whirlpool, which lies close to the bridge and travels through about a mile and a half of wonderful scenery, to end with the grand finale of the dramatic White Lady Waterfall.

Alongside the river and above the gorge there are lovely walks from one end of the gorge to the other. Following the river path walkers can enjoy its wildlife and changing moods, whilst from above there are long vista's of a scenic landscape of glorious woods, rare wild flowers and plants. An enjoyable legend tells that in the 17th century the gorge was inhabited by a notorious family of outlaws - the Gubbins. They are said to have terrorised the neighbourhood, stole sheep from Dartmoor, committed "lewd" acts, and made of with "two strumpets" from whom they are said to have multiplied accordingly! Today, Lydford Gorge is owned by the National Trust and is open for its entire length throughout the summer. It is a lovely place to wander and continues to be appreciated and revered for its beauty. Lydford Gorge - Entrance down the hill below the church. The 3 mile full tour of the gorge can take 2 hours or more so should be tackled as a separate walk. See The National Trust site for details. As mentioned elsewhere, Lydford Gorge and its geology were one reason for Lydford being sited where it is. Two of its features worth mentioning here are the Devil's Cauldron, reached by a walkway slung over the water and the White Lady Waterfall so called because when in full flow the water fans out like the skirt of a dress. Just south of the centre of Lydford, at the bottom of the hill that acted as part of King Alfred's defences of the Saxon town is a stone bridge over the Lyd, a river that flows fast and southwards from the hills of Dartmoor. Immediately below the bridge the river falls sharply down into the deep and beautiful, tree-lined ravine known as Lydford Gorge.