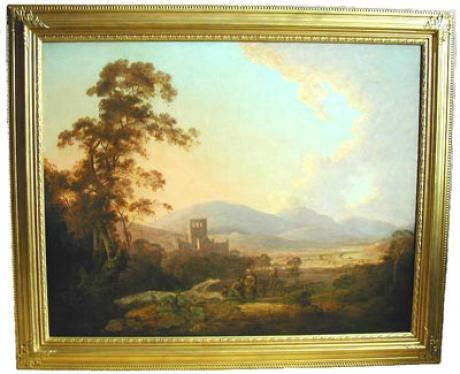 The east end of the abbey was completed in 1146. Other buildings in the complex were added over the next 50 years. The abbey was built in the form of a St. John's cross. A considerable portion of the abbey is now in ruins, though a structure dating from 1590 is maintained as a museum open to the public.

Alexander II and other Scottish kings and nobles are buried at the abbey. The embalmed heart of Robert the Bruce is also said to rest on the abbey's grounds, while the rest of his body is buried in Dunfermline Abbey. In 1812, a stone coffin that some speculated was that of Michael Scot the philosopher and "wizard", was found in an aisle in the abbey's south chancel.

It is known for its many carved decorative details, including likenesses of saints, dragons, gargoyles and plants. On one of the abbey's stairways is an inscription by John Morow, a master mason, that says: "Be halde to ye hende" (Keep in mind, the end, your salvation), which has become the motto of the town of Melrose.

An earlier monastery dedicated to Saint Aidan was founded at Old Melrose in the 7th century on a site about two miles (3 km) east of Melrose Abbey. It was raided by Kenneth I of Scotland in 839. Set in a bend of the river Tweed, a graveyard marks the site. St. Cuthbert was one of the abbots, before he became bishop of Holy Island, in Northumbria.

King David I wanted the new abbey to be built on the same site, but the Cistercians insisted that the land was not good enough for farming and instead selected the current site. It is supposed to have been built in ten years. The church of the convent was dedicated to St. Mary (like all Cistercian houses) on July 28, 1146. The Abbey became the mother church of the order in Scotland.

Melrose Abbey in 1800 when part of the abbey was still in use as the parish church.A town slowly grew up around the Abbey. In 1322 the town was attacked by the army of Edward II, and much of the Abbey destroyed. It was rebuilt with the help of King Robert the Bruce, whose embalmed heart, encased in lead, was buried in the church.

In 1385 the Abbey was burned by the army of Richard II of England as he forced the army of David II of Scotland back to Edinburgh. It was rebuilt over a period of about 100 years—construction was still unfinished when James IV visited in 1504.

In 1544, as English armies raged across Scotland in an effort to force the Scots to allow the infant Mary, Queen of Scots to marry the son of Henry VIII, the Abbey was again badly damaged and was never fully repaired. This led to its decline as a working monastery. The last abbot was James Stuart (illegitimate son of James V), who died in 1559. In 1590, Melrose's last monk died.

The Abbey withstood one final assault—some of its walls still show the marks of cannon-fire after having been bombarded by Oliver Cromwell during the English Civil War.

In 1610, a portion of the Abbey's church was converted into a parish church for the surrounding town. This involved the insertion of a plain vault into the crossing, which obscured the original ribbed vaulting. It was used until 1810 when a new church was erected in the town.

In 1996 an archaeological excavation on the site unearthed a conical lead container and an engraved copper plaque that read "The enclosed leaden casket containing a heart was found beneath Chapter House floor, March 1921, by His Majesty's Office of Works"; the lead container was not opened, but it is assumed that since there are no records of anyone else's heart being buried at Melrose that it was indeed the heart of Robert I. The container was reburied at Melrose Abbey on June 22, 1998. A plinth was unveiled on June 24 that covers the burial site of the container.

Ground plan of Melrose Abbey.The abbey is built in the form of St. John's cross, of the Gothic style of architecture, and is 258 feet (79 m) in length; the breadth 137-1/2 feet; and 943 feet (287 m) in circumference. A considerable part of the principal tower is now in ruins; its present height is 84 feet (26 m). There are many very superb windows; the principal one at the east end (which is the top nave of the cross,) appears to have been more recently built than the others, and is 57 feet (17 m) in extreme height, and 28 feet (8.5 m) wide. It has been ornamented with statues, &c. The beauty of the carved work, with which the abbey is profusely decorated, is seldom equalled.

There are in the external view of the building 50 windows, 4 doors, 54 niches, and above 50 buttresses. The abbey was much injured by the English in 1322 and 1384. Richard II made it a grant in 1389, as some compensation for the injuries it had sustained in the retreat of his army. It was also greatly defaced during the reformation.

There were one hundred monks, without including the abbot and dignitaries. The last abbot was James Stuart, natural son of James V, who died in 1559. The privileges and possessions of the abbey were very extensive, and it was endowed by its founder, David, with the lands of Melrose, Eildon, and other places; the right of fishery on the Tweed; and succeeding monarchs increased its property. Sixty of the monks, it is said, renounced poperty at the reformation. In 1542, the revenue of the abbey was, "£1758 in money, 14 chalders nine bolls of wheat, 56 chal. 5 bolls of barley, 78 chal. 13 bolls of meal, 44 chal. 10 bolls of oats, 84 capons, 620 poultry, 105 stone of butter, 8 chal. of salt, 340 loads of peats, and 500 carriages;" besides 60 bolls of corn, 300 barrels (48 m3) of ale, and 18 hogsheads of wine, for the service of the mass: a large quantity for the entertainment of strangers; £4,000 for the care of the sick; and £400 to the barber. These were given up at the commencement of the reformation in 1561. The lands were either seized by the crown, or divided amongst the nobles. A large portion fell into the hands of the Buccleugh family.

The Spirit of Melrose Abbey Lives On A Presbyterian congregation in Bloomfield Hills, Michigan, USA has built what may be the last gothic cathedral in the U.S. and patterned it after Melrose Abbey. The church, Kirk in the Hills, completed in 1958, majestic in its gothic style, is located on a 40-acre lakeside setting 20 miles north of Detroit.

Ibbetson was born at Farnley Moor, Leeds. He was the second child of Richard Ibbetson, a clothier from Yorkshire. According to his Memoir, his mother fell on the ice and went into labor prematurely, causing him to be delivered by caesarean section and resulting in a middle name he attempted to hide throughout his life. Ibbetson was probably educated in a local Moravian community and then by Quakers in Leeds. According to James Mitchell in the Oxford Dictionary of National Biography, the "unusual thoroughness" of his education "is reflected in the fluent prose, both of his published painting manuals and of his regular, often entertaining, and rewarding correspondence with patrons". Ibbetson was apprenticed to John Fletcher, a ship painter in Hull, from 1772 to 1777. He then moved to London, where for the next ten years he was primarily a picture restorer for a Clarke of Leicester Fields. In 1782 wrote an account of his life and sent it to the artist Benjamin West which was transcribed by Joseph Farington in 1805. Around 1780, Ibbetson married his first wife, Elizabeth.

In 1785, Ibbetson began exhibiting at the Royal Academy with View of North Fleet. Mitchell calls George Biggin (1783), which is one of Ibbetson's earliest known works, "an accomplished full-length portrait in the Gainsborough tradition, [which] should be considered as a milestone in the development of an artist who was entirely self-taught". Through the efforts of Captain William Baillie in 1787, Ibbetson was made draughtsman to Colonel Charles Cathcart on the first British embassy to Peking (Beijing); he made many watercolor drawings of the animals and plants on the journey. While he was away, his Ascent of George Biggin, esq. from St. George's Fields, June 29th 1785 was exhibited at the Royal Academy to great critical and popular acclaim.

In 1789, Ibbetson went to visit the Viscount Mountstuart at Cardiff Castle in Wales. He spent decades drawing the scenery there and, according to Mitchell, "[h]is detailed watercolours of iron furnaces, coal staithes, and copper mines foreshadow the work of Joseph Wright of Derby and J. M. W. Turner and constitute an important record of the early industrial developments in that region, but are less well known than his more numerous scenes of folk life and picturesque scenery." After a visit to the Isle of Wight in 1790, he began painting shipwrecks and smugglers. David Murray, 2nd Earl of Mansfield, and his wife commissioned Ibbetson to decorate Kenwood House, in 1794. This distracted him from the death of his wife and caring for their three children. Her death had "provoked a minor nervous breakdown, exacerbated by near destitution", but the Kenwood project relieved that stress. Four years later, he moved to Liverpool to work for Thomas Vernon. In 1801 he married his second wife, Bella Thompson, and moved to Ambleside.

Ibbetson acquired several generous patrons in Liverpool and in Edinburgh: William Roscoe, Sir Henry Nelthorpe, and the Countess of Balcarress. The last prompted him to write and publish his instruction manual An Accidence, or Gamut, of Painting in Oil (1803). In 1803, he met the Yorkshire philanthropist William Danby and in 1805 moved to Masham to be near him. The next 14 years of his life were the most settled of his life.

Ibbetson died on 13 October 1817 and was buried in the churchyard of St Mary's, Masham.

Benjamin West described Ibbetson as the "Berchem of England" in recognition of his debt to the Dutch 17th century landscape painters. According to Mitchell, "[h]is watercolours are prized for their delicacy and sureness of line". Many were engraved for projects such as John Church's A Cabinet of Quadrupeds and John Boydell's Shakespeare Gallery.Melrose Abbey is a Gothic-style abbey in Melrose, Scotland. It was founded in 1136 by Cistercian monks, on the request of King David I of Scotland. It was headed by the Abbot or Commendator of Melrose. Today the abbey is maintained by Historic Scotland (open all year; entrance charge). The ruins of Melrose are widely considered among the most beautiful of religious houses in the United Kingdom, being especially notable for a wealth of well-preserved figure-sculpture.