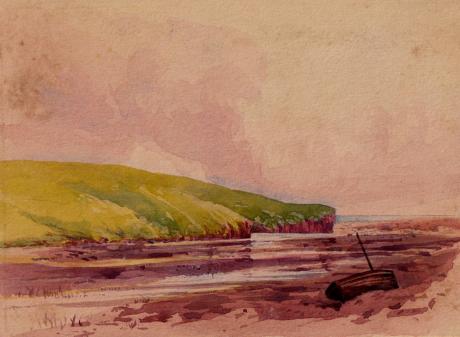 pencil and watercolour
12.50 x 17 cm.
Enquire about this item

The Lower Otter Estuary meets the sea at Budleigh Salterton in East Devon. The estuary, along with the cliffs of Otterton Point, is a nationally important site for biodiversity and is designated as a Site of Special Scientific Interest (SSSI). It contains a range of intertidal habitats including saltmarsh and tidal creeks.

The current area of the SSSI is 33 hectares but the estuary itself was once much larger. Next to the estuary – and once part of it – is an extensive area of freshwater grazing marsh, while the mouth of the estuary is largely closed by a shingle bar which has changed little over hundreds of years.

The estuary and marshes support a wide variety of breeding and wintering bird species, including waders and wildfowl. They form part of a network of important feeding sites which include the Axe and Exe Estuaries.

A network of public footpaths provides access to much of the site, with one of Devon’s most popular footpaths running along the embankment. This was built in 1812 to convert estuarine habitat to farmland. Today, it is part of the South West Coast Path.

The estuary is managed by the Pebblebed Heaths Conservation Trust, a conservation charity established by Clinton Devon Estates in 2006 to look after the nature reserve and the adjacent East Devon Pebbled Heaths. Work includes managing reedbeds, improving wetland features on the grazing marshes, and understanding and controlling invasive species such as Himalayan balsam.

The natural environment of the River Otter and its estuary has, for hundreds of years, been modified by humans. In the early 19th century an embankment was built to claim land for agriculture. This enclosed about three-quarters of the original extent of the estuary, turning intertidal habitats from mudflat and saltmarsh into agricultural land. The river was also straightened and disconnected from its floodplain. Further alterations to the river and its floodplain took place with the construction of an aqueduct, a refuse tip, and the railway which arrived in 1897.

The overall results of all these changes is a disruption of natural processes with the river no longer able to adapt and move naturally across the floodplain as it once did. Nor can it cope effectively with flooding events. The natural environment itself is also poorer, resulting in reduced biodiversity and lower-quality habitats, and there is a constant need for costly infrastructure maintenance.

Manmade changes to the river and estuary mean the flood flows after heavy rainfall cannot pass down the river channel to the estuary. Water spills into the remaining floodplain but then backs up until it can overtop the embankment across the floodplain. Prolonged deep flooding of fields, Budleigh Salterton Cricket Club and South Farm Road follows because the outfall of the only land drain lies below the high tide mark.

Climate change, with increasing storminess and changing weather patterns, means that these floods are becoming more frequent, while rising sea levels also mean that the embankments are more likely to be overtopped at high tide. Damage to infrastructure as a result of flooding is already on the increase. There is a significant risk that a future major flood or extreme tidal event could lead to catastrophic failure of embankments, with unpredictable impacts on the environment. Such an event would also compromise one of the most heavily used public footpaths in Devon, and a public highway to South Farm.

Erosion of embankments, river banks and footpaths, as well as clearance of drainage outfalls, place increasing financial demands on those responsible for them, including Devon County Council and East Devon District Council. Maintaining the status quo is becoming ever more difficult and there is a common desire for a more sustainable way forward.

There is a strong argument for a pre-emptive and planned approach to climate change, leading to managed realignment of the existing embankments. This could both secure long-term future public access and allow natural processes to re-assert themselves, leading to new benefits for people and wildlife.

The River Otter rises in the Blackdown Hills just inside the county of Somerset, England near Otterford, then flows south through East Devon. It enters the English Channel at the western end of Lyme Bay, part of the Jurassic Coast, a UNESCO World Heritage Site. The Permian and Triassic sandstone aquifer in the Otter Valley is one of Devon's largest groundwater sources, supplying drinking water to 200,000 people.

The river's source is north of Otterford, where a stream feeds the Otterhead Lakes: ST225152 and then through Churchstanton before entering Devon.

The river flows through a predominantly rural area, with small cattle, sheep and dairy farms. The largest town in the Otter Valley is Honiton. Tourism and leisure play important roles in the economy.[4] For much of its length, the river flows through two Areas of Outstanding Natural Beauty (AONBs) – The Blackdown Hills AONB (to the north of Honiton) and East Devon AONB (to the south of Ottery St Mary).

The river passes through or by Upottery, Rawridge, Monkton, Honiton, Alfington, Ottery St Mary, Tipton St John, Newton Poppleford and Otterton. It then reaching the Otter Estuary to the east of Budleigh Salterton.

The Otter Estuary Nature Reserve is a 57-acre (230,000 m2) Site of Special Scientific Interest (SSSI) consisting of tidal mudflats and saltmarsh. There is no public access to the estuary itself but footpaths lead to two viewing platforms on the west and two hides one on the west and one on the east. The wintering population of wildfowl and waders includes common redshank, greenshank, dunlin, common sandpiper, ringed plover, grey plover, Eurasian curlew, common snipe, water rail, Eurasian wigeon, Eurasian teal, common shelduck, brent goose, red-breasted merganser and little grebe. Eurasian reed warbler, reed bunting and sedge warbler breed on the reserve.

The Environment Agency measures the water level of the Otter and its tributaries at six or more "river level stations".

The point at which the river reaches the coast (SY077820) is part of the Jurassic Coast, a World Heritage Site.

A small tributary is the River Tale, with the confluence NW of Ottery St Mary. This small town (associated with Samuel Taylor Coleridge, Sir Walter Raleigh, and an annual tar barrel rolling event) is the site of an unusual circular weir, known as the Tumbling Weir. Another small tributary is Budleigh Brook, which joins the Otter at East Budleigh.

At one time there were as many as fifty watermills powered by the River Otter. One of the remaining working mills, thought to date from the 17th century, is Tracey Mill near Honiton. In the 1970s, fish ponds were dug around the mill, fed by the leat; over a million gallons of fresh water flow through these ponds every day, helping the commercial production of trout "without the need for antibiotics or added oxygen".

One mill, at Dotton, is known to have operated from around 1100 to 1960, after which the building was demolished. The site was excavated by Channel 4's archaeological television programme Time Team, the episode "The Domesday Mill" being broadcast in 2007. This mill is mentioned in the Domesday Book. A weir diverted water to the mill's leat, supplying the vertical breast-shot wheel. Dotton (now little more than a farm) is 4.5 miles (7.2 km) from the mouth of the Otter, and about one mile (1.6 km) north of the village of Colaton Raleigh.

At the village of Otterton (once a seaport on a larger Otter Estuary), Otterton Mill is a working watermill over 1,000 years old; it was one of the three largest mills in Devon as recorded in the Domesday Book of 1086. It is powered by water diverted through a leat. Immediately north of the leat, a fish pass (a.k.a. ladder/staircase) has been constructed beside a river-wide weir, restoring migratory fish runs to the river after a break of over 100 years.

The poet Samuel Taylor Coleridge (1772–1834), who was born in Ottery St Mary, wrote a sonnet entitled "Sonnet to the River Otter".

At Ottery St Mary the river is spanned by a 95-metre foot and cycle bridge named Coleridge Bridge; built at a cost approaching £1m, this was officially opened on 29 August 2011. A small area of land at one end of the bridge was sold to the local authorities by Lord Coleridge, a descendant of the poet, Samuel Taylor Coleridge.

The Otter is the only river in England known to contain a wild breeding population of beavers, a species that died out in Britain in around 1550. The origin of the population is not known; it was first noticed in 2013, apparently successfully bearing three kits the next year.

Following concern from local landowners and anglers, as well as farmers worrying that the beavers could carry disease, the government announced that it would capture the beavers and place them in a zoo or wildlife park. A sport fishing industry lobbyist group, the Angling Trust, said "it would be irresponsible even to consider re-introducing this species into the wild without first restoring our rivers to good health."

This decision to immediately remove the beavers was protested by local residents and campaign groups, with environmental journalist George Monbiot describing the government and Angling Trust as "control freaks": "I'm an angler, and the Angling Trust does not represent me on this issue...most anglers, in my experience, have a powerful connection with nature. The chance of seeing remarkable wild animals while waiting quietly on the riverbank is a major part of why we do it."

The introduction of beavers to rivers has been encouraged by environmentalists, who have argued that beaver dams provide a habitat for birds and fish, reduce the strength of flooding by trapping water high up in a catchment area, away from homes further downstream, and could be a future tourist attraction. On the 28 January 2015, Natural England declared that the beavers would be allowed to remain on condition that they were free of disease and of the Eurasian species (as opposed to North American beavers, which would be invasive). These conditions were passed, and the beavers were returned to the river as part of a five-year trial scheme.

In February 2020, the trial was extended by six months to August, when the government announced that the beavers, which by then numbered 15 family groups, could remain on the River Otter indefinitely. It was the first legally sanctioned reintroduction of an extinct native animal anywhere in England.