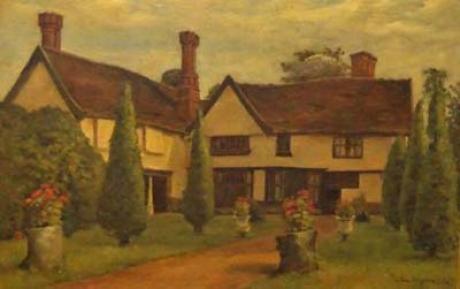 Pride of place belongs to the Gosnold family, who lived here for 300 years from c.1400 first as tenants, then as owners. Bartholomew Gosnold (1571-1607) voyaged to the New World, where in 1602 he discovered Cape Cod and Martha's Vineyard, which he named after his infant daughter. In 1607, 13 years before the Mayflower landed, he returned to found Jamestown colony in Virginia, the first permanent English-speaking settlement in America. It has been said that the two voyages were planned at the hearthside of Otley Hall.

Traditionally, Gosnold's name has had to yield first place to Captain John Smith, one of the many East Anglians he recruited for the second voyage. According to his own account, Smith was rescued from death by Pocahontas, the beautiful daughter of Indian Chief Powhatan. She died in 1616 while on a visit to England and is buried at St. George's Church in Gravesend, Kent.

The literary repercussions of Gosnold's 1602 voyage were also considerable: Shakespeare's final play The Tempest was inspired by reports of the voyage. Indeed, it is through the Gosnold connection that Edward Everett Hale was able to identify Prospero's Island as Cuttyhunk, one of the Elizabeth Isles off the coast of Massachusetts, where Bartholomew Gosnold built the first known English house in America. Descriptions of the Island in the accounts of Brereton, Archer and Gosnold himself are reflected clearly in Shakespeare's text; to such an extent indeed, that Hale claimed Caliban as a Massachusetts Indian. n addition, there are historically accurate recreations designed by Sylvia Landsberg, author of The Medieval Garden. These include an orchard, a herber, and a knot garden. With their exquisite blend of wild and cultivated terrain, the 10 acres of gardens at Otley Hall provide a feast for the senses. They include parts of an important design by Francis Inigo Thomas (1866-1950), featuring an H-canal, nutteries, croquet lawn, rose garden and moat walk.

Captain Bartholomew Gosnold, an English lawyer and explorer, was a member of the Virginia Company and an enthusiastic supporter of colonization. In 1605, Gosnold began to assemble a group of men to establish a new colony in Virginia. He gained support of King James I, and the Virginia Company was granted a royal charter. Gosnold was vice admiral of the expedition and captained the Godspeed, one of the three ships to make the voyage. He was no stranger to the New World, having made a voyage to New England in 1602 to establish an English Colony. He is credited with naming Martha’s Vineyard for his daughter and Cape Cod for the amount of fish that he encountered there. Gosnold’s skeletal remains and the staff he was buried with are on view in the “Written in Bone: Forensic Files of the 17th-Century Chesapeake” exhibition at the Smithsonian’s National Museum of Natural History. A life-size reconstructed model of Gosnold also is on view. Sculpted by forensic artists based on his skeleton, this is the first and most detailed glimpse into what Gosnold looked like. In 1606, Gosnold, along with John Smith and the English colonists, embarked on a long journey across the Atlantic. In 1607, the ships landed on the banks of the James River in Virginia, and the settlement was named Jamestown. The settlers were an economically diverse collection of gentlemen, craftsmen and laborers. Gosnold and Smith contributed to the design of James Fort, which was constructed within a month of arrival to protect the settlement from persistent attacks by nearby Indians. Within the settlement, colonists were constantly afflicted by famine and disease. Gosnold died of illness only three months after landing at Jamestown. In 1607, George Percy wrote in his diary that “He was honorably buried, having all the Ordnance in the Fort shot off with many vollies of small shot.” As one of the leaders of the colony and a captain, Gosnold received a more elaborate burial than many of the other colonists. In 2005, archaeologists discovered what is believed to be Gosnold’s grave. It was discovered just outside the palisade wall of James Fort.