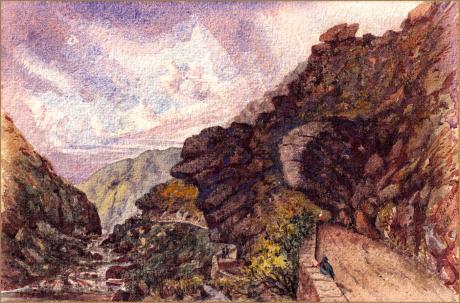 According to legend, Roland, Charlemagne's nephew , passed through this site in August 778, riding on horseback towards the pass which will allow him to repel the Saracens (in reality the Basque Vasconne militia) in Spain with the help of his army . However, a large impassable rock blocked his way. A first legend tells that this cavity was dug by a hoof from the Roland horse. A second relates that unable to continue his path, Roland brandished his sword (named Durandal) and cut a passage himself to cross this obstacle with his soldiers. Legendary myth or natural collapse enlarged by man to pass a mule track? The mystery remains. Unfortunately, legend also tells that the brave Roland died shortly after this episode, on August 12, 778 at the pass known as "Col de Roncevaux" at the feet of Spain, during a confrontation against the Saracens.

The road through the gorge, bordering the Nive, is very narrow and curvy, but every few meters, there are nooks where you can wait to allow another car to pass. To get to the rock, you can go down the small river Nive, then go climbing rocks. Or, go down the road, where we find a gentle slope down to it. The Rock, is curious and kids love to go through it. Use extreme caution, as there is no fence.