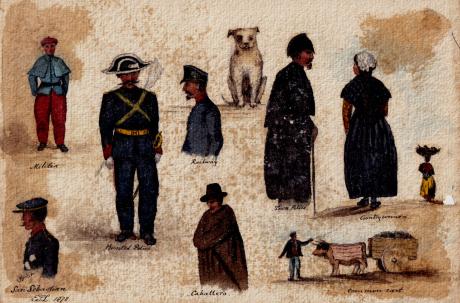 San Sebastián or Donostia (Basque: is a coastal city and municipality located in the Basque Autonomous Community, Spain. It lies on the coast of the Bay of Biscay, 20 km (12 miles) from the French border. The capital city of the province of Gipuzkoa, the municipality's population is 186,095 as of 2015, with its metropolitan area reaching 436,500 in 2010. Locals call themselves donostiarra (singular), both in Spanish and Basque. The main economic activities are almost entirely service-based, with an emphasis on commerce and tourism, as it is one of the most historically famous tourist destinations in Spain. Despite the city's small size, events such as the San Sebastián International Film Festival and the San Sebastian Jazz Festival have given it an international dimension. San Sebastián, along with Wrocław, Poland, was the European Capital of Culture in 2016.

In 1808, Napoleonic forces captured San Sebastián in the Peninsular War. In 1813, after a siege of various weeks, on 28 August, during the night, a landing party from a British Royal Navy squadron captured Santa Clara Island, in the bay. Situated on a narrow promontory that jutted out into the sea between the waters of the Bay of Biscay and the broad estuary of the Urumea River, the town was hard to get at and well fortified – "it was the strongest fortification I ever saw, Gibraltar excepted", wrote William Dent. Three days later, on 31 August, British and Portuguese troops besieging San Sebastián assaulted the town. The relieving troops ransacked and burnt the city to the ground. Only the street at the foot of the hill (now called 31 August Street) remained.

After these destructive events, reconstruction of the city was commenced in the original location with a slightly altered layout. A modern octagonal layout as drafted by the architect P.M. Ugartemendia was turned down and eventually M. Gogorza's blueprint was approved, then supervised and implemented by the Ugartemendia. This area, the old town, has a neoclassical, austere and systematic style of architectural construction. Constitution Square was built in 1817 and the town hall (currently a library) between 1828 and 1832.:100 Housing in the old town was built gradually alongside the rest of the area.

The liberal and bourgeois San Sebastián became the capital of Gipuzkoa (instead of Tolosa) until 1823, when absolutists besieged the town (only 200 inhabitants remained in the town when the offensive troops entered). It was designated again as the capital in 1854.[20] In 1835-6, the British Auxiliary Legion under Sir George de Lacy Evans defended the town against the Carlist besiegers. Some of those who died were buried in the English Cemetery on Mount Urgull.

At the beginning of the 19th century, the local government was still ruled by the principle of nobility, while inhabitants of foreign origin or descent had always been ubiquitous in the town, especially among the trading community. Although San Sebastián benefited greatly from the charter system established in the Southern Basque Country (foruak, with borders in the Ebro river and no duties for overseas goods), the town was at odds with the more traditional Gipuzkoa, even requesting secession from the province and annexation to Navarre in 1841.

In 1863, the defensive walls of the town were demolished (their remains are visible in the underground car park on the Boulevard) and an expansion of the town began in an attempt to move on from its previous military function. Jose Goicoa and Ramon Cortazar were appointed to oversee the work. They modelled the new city according to an orthogonal shape in a neoclassical Parisian style, and Goicoa designed several elegant buildings, such as the Miramar Palace and La Concha Promenade.:145–146 The city was chosen by the Spanish monarchy as a summer retreat following the French example of nearby Biarritz, and Spanish nobility and the diplomatic corps opened residences in the town. As the "wave baths" at La Concha were in conflict with nearby shipbuilding activity, the shipyards relocated to Pasaia, a nearby bay that had formerly been part of San Sebastián.

However, in 1875, war came to the town again, and in 1876 shelling over the city by Carlists claimed the life of acclaimed the poet Bilintx. From 1885, King Alfonso XII of Spain's widow Maria Cristina spent every summer in Donostia along with her retinue, staying at the Miramar Palace. In 1887, a casino was built, which eventually became the current city hall, and some time later the Regional Government building was completed in Plaza Gipuzkoa following Jose Goicoa's design. Cultural life thrived in this period, giving rise to various events that still take place in the city, such as the Caldereros or the Tamborrada, and journalistic and literary works in both Spanish and Basque.