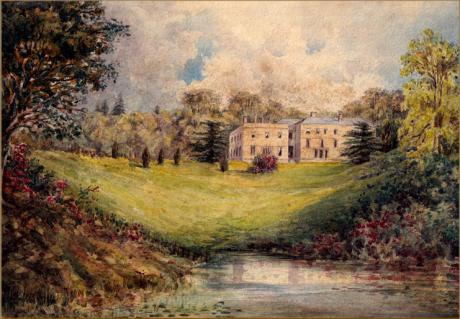 inscribed on the mount " Ponsbourne"

During the 15th century, many of the large estates in England came into the Crown following the Dissolution. This particular estate was different, given that it had already been sold to Sir John Fortescue, the Chief Justice of the King’s Bench and the author of De Laudibus Legum Angliae, the Commendation of the Laws of England. He was responsible for building the original “stately and large” mansion in the valley.

During the 18th century, the manor was sold to Lawrence Sullivan esq. of Mile End, who proceeded to knock down the mansion that Fortescue built. He then built the current mansion in a slightly different location, offering a better vantage point than the previous. He also undertook large amounts of landscaping, creating a series of features that successfully added to the ornate beauty of the estate. It is easy to see the work that was completed when James William Carlile eventually purchased Ponsbourne in the 19th century, as we can see a series of Victorian improvements, including the addition of a memorable staircase. We can also still see some of the stained glass windows that he added, along with monograms that have been hidden throughout the building and the Carlile Coat of Arms.

Naturally, Carlile focused on creating a landscaped garden to reflect the beauty of the world around him. This included the establishment of rock pools, waterfalls and bridges that can still be seen in the grounds today. At one point, there was also a “Winter Garden” in the basement of the mansion, but it has unfortunately been lost to time.

PONSBOURNE was held of the manor of Hatfield. There is no early mention of it by name, but as members of the family called Ponsbourne held lands in Hatfield. In the 13th and 14th centuries it seems likely that they were the early possessors. The first of these to be mentioned is William de Ponsbourne in 1281. The name of John de Ponsbourne occurs in 1293 and of Robert the son of William de Ponsbourne in 1308. In 1346 the heir of Robert de Ponsbourne is mentioned, after which there is no further record of the family, but in 1441 John Kirkeby died seised of lands formerly of Robert Ponsbourne. It probably was acquired with Gacelyns by Sir John Fortescue, the chief justice. He forfeited in 1462, when Lord Wenlock was granted his lands. John Fortescue, who ultimately succeeded, was sheriff in 1481 and 1481; he died in 1499-1500 and was succeeded by his son John. This John Fortescue died seised of the manor of Ponsbourne in 1517. His son and heir Henry Fortescue next held it. He leased Ponsbourne to Sir William Cavendish for eighty years and sold the reversion in 1538 to Sir Thomas Seymour, Lord Admiral of England, who conveyed it to the Crown in exchange for other lands. In 1553 Ponsbourne was granted by Edward VI to Sir John Cock, who died in 1358 and was succeeded by his son Henry. In 1622 the manor was held by Sir Edmund Lucy, the husband of Elizabeth daughter of Henry Cock. He conveyed it in that year to Edward Sheldon, who in 1630 sold Ponsbourne to Sir John Ferrers, who died seised of the manor and disparked park called Ponsbourne Park in 1640. Sir John's eldest son Knighton Ferrers predeceased him, leaving a widow Katharine and an infant daughter of the same name. In 1649 Ponsbourne was in the possession of Thomas Viscount Fanshawe of Dromore and Katharine his wife, the daughter and heir of Knighton Ferrers, who in 1655 conveyed the manor to Stephen Ewer. In 1660 Stephen Ewer repaired the chapel at Ponsbourne, and in 16/2 obtained a licence as a Presbyterian, presumably to hold services in his house. In 1674 he sold the manor to John Woollaston who sold it again to Paris Slaughter, whose son Paris succeeded in 1693. His daughter and heir married a Mr. Clarke, whose son William Clark sold Ponsbourne to Samuel Strode, who was lord of the manor in 1728. He was succeeded by his William, who died in 1756, and by his grandson William, who in 1761 conveyed the manor to Lawrence Sullivan. From Lawrence it passed to his son Stephen, who sold it in 1811 or 1812 to William Busk, from whom it was purchased in 1819 by his brother Jacob Hans Busk. In 1836 the manor was again sold to Mr. Wynn Ellis, who disposed of it in 1875 to Mr. James William Carlile. The latter is the present lord of the manor, and resides at Ponsbournc Park. Ponsbourne Manor House is the residence of Colonel Sir E. Hildred Carlile, M.P. for Mid-Herts.

Mr. Wynn Ellis was the son of Mr. Thomas Ellis, of Oundle, Co. Northampton, by his wife, Elizabeth Ordway, of Barkway, in this County, and was born at Oundle, in July, 1790. At an early age he commenced business in London as a Warehouseman, and in that capacity amassed an enormous fortune. In 1814 he married Mary-Maria, daughter of John Smith, of Lincoln, Esq., and great-niece and heir of Charles Fearson, of Tankerton, Co. Kent Esq. She died in 1872, leaving no issue. Mr. Ellis represented Leicester in Parliament as an advanced Liberal for about eighteen years, until 1847, when he retired from Parliamentary life. He died on the 27th November, 1875, and by his will, made nine days before his death, he bequeathed to the nation his noble collection of paintings by the old masters, on condition that they should be exhibited by themselves, for the space of ten years, in a room or rooms of the National Gallery, to be called "The Wynn Ellis Collection," After that time they may be exhibited as the Trustees of the National Gallery may think fit, but the frame of each picture must be labelled. The gift of Mr. Wynn Ellis. The modern pictures were directed to be sold to the uses of his will. Mr. Ellis also bequeathed a very large sum of money for charitable purposes. He was buried at Whitstable, in a mausoleum which he had had designed by Mr. Barry. In May, 1875, Mr. Ellis sold the estate, commonly known as Ponsbourne Park (lying about five miles south-east of the town), to James-William Carlile, of Huddersfield, Esquire, who has pulled down the old house, which dated from about the time of James II., and on its site has erected another, and a much larger residence.