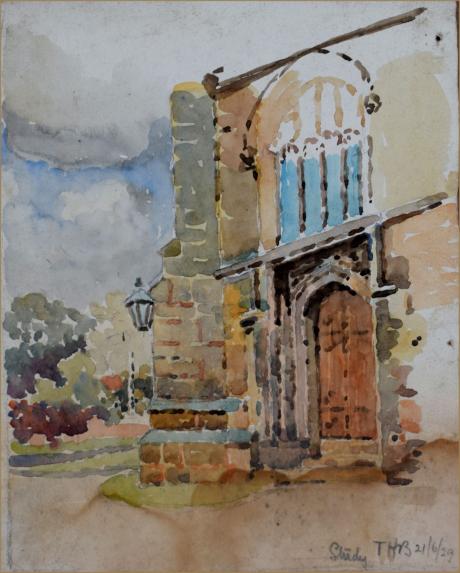 St James, Didsbury, on Stenner Lane, is a Grade II* Church of England church in the Manchester suburb of Didsbury and with Emmanuel church is part of the parish of St James and Emmanuel, Didsbury. In 1235 Albertus de Gresley granted land to Nicholas de Longford, Lord of the Manor of Withington, for the foundation of his own chapel in Didsbury. The first mention of the chapel is in the records of the Lancashire Assizes when 'William, Chaplain of Didsbury, came not on the first day and was fined'.

In 1352 the Bishop of Lichfield gave permission for the consecration of a churchyard for the burial of the victims of the Black Death.In 1541 the Diocese of Chester was formed and the church was transferred from the Diocese of Lichfield. The parish covered an area from the River Mersey to Moss Side and from Chorlton-cum-Hardy to Heaton Norris and Reddish.

In accordance with the orders of Elizabeth I all records of births, deaths and marriages began to be recorded in 1561. The original register is in the City of Manchester archives and includes the record of the baptism of Saint Ambrose Barlow on 30 November 1585. St James is an ancient Anglican church of medieval origins with significant subsequent 17th and mid-19th century modifications. The church was designated a Grade II* listed building on 25 February 1952.

The original chapel is believed to have been a 13th-century oratory. Rebuilding, including the "dumpy" tower, took place in the early 17th century. A memorial stone over the tower's north door commemorates its benefactors, Sir Edward Moseley and Anne Mosley and the date 1620. The pinnacles and loops surmounting the tower are from 1801. The Mosley family, local magnates, were the benefactors. The chapel became the parish church of Didsbury in 1850. The nave was constructed in 1855, the chancel in 1871 and the east part of the south aisle in 1895. The church is of red sandstone with slate roofs.

Pevsner found the interior "odd, early seventeenth century fabric, but later additions and alterations have changed its character". The 18th-centuries galleries have been removed and substantial reconstruction took place in the 1850s and 1890s. The stained glass is all 19th century. The church contains impressive funerary monuments, particularly of the Mosley family. A "good early C17 wall monument in Renaissance style ... a 3-bay Ionic colonnade surmounted by a central Corinthian architrave with cresting, with kneeling figures in each part" commemorates Ralph Mosley, who died in 1616. Sir Nicholas Mosley, the builder of Hough End Hall, is shown kneeling, "dressed in the robes of the Lord Mayor of London (1599)".The Mosley heiress, Ann, Lady Bland, the founder of St Ann's Church, Manchester, is also represented.

The interior of the church underwent significant repair and renovation in 2012 as part of the 775th anniversary celebrations. The six St James’ bells date from 1727 and were cast in Gloucester. The bells are rung before worship on Sunday and for weddings and special occasions.

Didsbury is a suburban area of Manchester, England, on the north bank of the River Mersey, 4.5 miles (7.2 km) south of Manchester city centre. The population at the 2011 census was 26,788. Historically a part of Lancashire, there are records of Didsbury existing as a small hamlet as early as the 13th century. Its early history was dominated by being part of the Manor of Withington, a feudal estate that covered a large part of what is now the south of Manchester. Didsbury was described during the 18th century as a township separate from outside influence. In 1745 Charles Edward Stuart crossed the Mersey at Didsbury in the Jacobite march south from Manchester to Derby, and again in the subsequent retreat. Didsbury was largely rural until the mid-19th century, when it underwent development and urbanisation during the Industrial Revolution. It became part of Manchester in 1904. The Royal Society for the Protection of Birds was formed in Didsbury in 1889.

Didsbury derives its name from the Anglo-Saxon Dyddi's burg, probably referring to a man known as Dyddi whose stronghold or township it was on a low cliff overlooking a place where the River Mersey could be forded. In the 13th century Didsbury was variously referred to as Dydesbyre, Dydesbiri, Didsbury or Dodesbury. A charter granted in about 1260 shows that a corn-grinding mill was operating in Didsbury, along the River Mersey, but the earliest reference to Didsbury is in a document dating from 1235, recording a grant of land for the building of a chapel. The church was named St James Church in 1855. It underwent major refurbishment in 1620 and again in the 19th century, although most of the stonework visible today dates from the 17th century. A parsonage was built next to one of the two public houses that flanked the nearby village green, Ye Olde Cock Inn, so-called because of the cockfighting that used to take place there. The parsonage soon gained a reputation for being haunted; servants refused to sleep on the premises, and it was abandoned in 1850. Local alderman Fletcher Moss bought the house in 1865, and lived in it for more than 40 years. In 1902, he installed a gateway complete with wrought iron gates which he purchased from the soon to be demolished Spread Eagle Hotel in central Manchester which he once owned, at the entrance to the parsonage's garden, which, because of the building's reputation, became known locally as "the gates to Hell". The parsonage became a museum, now closed, but the gardens are still open to the public. The area around St James' Church has the highest concentration of listed buildings in Manchester, outside the city centre.

Didsbury was one of the few places between Stretford and Stockport where the River Mersey could be forded, which made it significant for troop movements during the English Civil War, in which Manchester was on the Parliamentarian side. The Royalist commander, Prince Rupert, stationed himself at Didsbury Ees, to the south of Barlow Moor. It is also likely that Bonnie Prince Charlie crossed the Mersey at Didsbury in 1745, in the Jacobite march south from Manchester to Derby, and again in his subsequent retreat. Jewish immigrants started to arrive in Manchester from the late 18th century, initially settling mainly in the suburbs to the north of the city. From the 1890s onwards, many of them moved to what were seen as the more "sophisticated" suburbs in the south, such as Withington and Didsbury. The influx of Jewish immigrants led to West Didsbury being nicknamed "Yidsbury" and Palatine Road, a main road through West Didsbury, "Palestine Road".

During the Victorian expansion of Manchester, Didsbury developed as a prosperous settlement; a few mansions from the period still exist on Wilmslow Road between Didsbury village and Parrs Wood to the east and Withington to the north, but they have now been converted to nursing homes and offices. The opening of the Midland Railway line in 1880 contributed greatly to the rapid growth in the population of Didsbury, with stations at Didsbury and Withington and West Didsbury offering easy rail connections to Manchester Central. The line closed in 1967, although Didsbury station building remained standing until its demolition in the 1980s. The station clock and water fountain have survived, dedicated to local doctor and campaigner for the poor, Dr. J. Milson Rhodes.

On 28 April 1910, French pilot Louis Paulhan landed his Farman biplane in Barcicroft Fields, Pytha Fold Farm, on the borders of Withington, Burnage and Didsbury, at the end of the first flight from London to Manchester in under 24 hours, with one short overnight stop at Lichfield. Arriving at 5:30 am, Paulhan beat the British contender, Claude Grahame-White, winning a £10,000 prize offered by the Daily Mail. This was the first powered flight into Manchester from any point outside the city. Two special trains were chartered to the newly built but unopened Burnage railway station to take spectators to the landing, many of whom had stood throughout the night. Paulhan's progress was followed throughout by a special train carrying his wife, Henri Farman and his mechanics. Afterwards his train took the party to a civic reception given by the Lord Mayor of Manchester in the town hall. A house in Paulhan Road, constructed in the 1930s near the site of his landing, is marked by a blue plaque to commemorate his achievement.