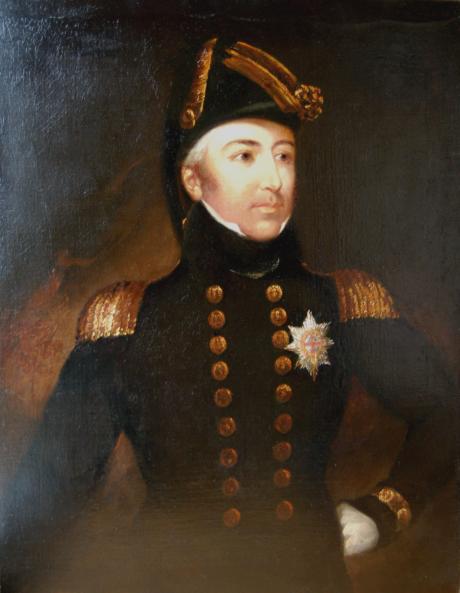 Cockburn, Sir George, eighth baronet (1772–1853), naval officer, second son of Sir James Cockburn, sixth baronet (d. 1804), and his second wife, Augusta Anne Ayscough, was born in Middlesex and brought up in a family of eight children and educated at schools in Marylebone and Margate. He also attended the Royal Navigational School in Old Burlington Street, London. At the age of nine he was entered as captain's servant on the books of the frigate Resource and afterwards of the yacht William and Mary, but he only went to sea in 1786. After serving in the channel and East Indies, he was confirmed in the rank of lieutenant on 2 January 1793. In June he was appointed as one of the lieutenants of the Victory, Lord Hood's flagship off Toulon; in October he was promoted to the command of the sloop Speedy; and on 20 February 1794 he was posted to the frigateMeleager, which served in relaying signals in Hotham's two actions off Toulon, on 14 March and 13 July 1795. For the following twelve months theMeleager was employed in the Gulf of Genoa, under the orders of Captain Nelson, whose patronage Cockburn won by his ‘zeal, ability and courage’ (Nicolas, 2.176–7), for which in August 1796 he was moved into the Minerve, a large frigate lately captured from the French. That December, when Nelson was sent from Gibraltar to relieve the garrison of Elba, he hoisted his commodore's broad pennant in the Minerve, which, on 20 December, in company with the Blanche off Cartagena, captured the Spanish frigate Sabina. On her return, passing the straits of Gibraltar, the Minerve ran through the Spanish fleet and joined the fleet under Sir John Jervis the day before the battle of Cape St Vincent, at which the Minerve was present, though without any active participation. Cockburn remained in the Mediterranean until the peace, and the Minerve captured, or assisted in capturing, several of the enemy's privateers and smaller ships of war, more especially the frigates Succès and Bravoure, which were driven ashore on the coast of Italy on 2 September 1801.

In July 1803 Cockburn was appointed to the Phaeton, which he commanded for the next two years in the East Indies. In July 1806 he was appointed to the Captain, and in March 1808 to the Pompée, in which in September he went out to the West Indies, where in the following February he assisted in the reduction of Martinique. In 1809 he commanded the flotilla of gunboats and bomb-vessels which co-operated with the army in the capture of Flushing, and which covered its retreat as it withdrew from the Scheldt. On his return he married his cousin Mary Cockburn on 28 November 1809; they had one surviving daughter, Augusta Harriot Mary. In February 1810 Cockburn was appointed to the Indefatigable and ordered to Quiberon Bay, where on 7 March he landed two agents who had undertaken to effect the escape of the king of Spain, then imprisoned in the castle of Valençay. However, these men were speedily arrested. TheIndefatigable subsequently sailed for Cadiz, then besieged by the French, against whom in August 1812 Cockburn commanded the boats of the fleet in an amphibious attack on the town of Moguer. He was afterwards sent to Havana, Cuba, in charge of two Spanish three-deckers, and on his return was, in November 1811, appointed to act as a commissioner in the attempted mediation between Spain and its South American colonies. The attempt proved impracticable, and the commission was dissolved in August 1812.

Advanced to the rank of rear-admiral, with his flag in the Marlborough, Cockburn was ordered first to command the squadron off Cadiz, then in November, with the outbreak of war with the United States, to Bermuda, where Sir J. B. Warren, the commander-in-chief, sent him with a small squadron to attack the enemy in the Chesapeake. Here the war took the form of attacks by landing parties on selected economic and military targets. The squadron forced its way to the head of the Chesapeake and was in regular conflict with the American militia, especially at Havre de Grace, Georgetown, and Frederickstown.

In August 1814 Cockburn accompanied the joint naval and military force under Major-General Ross, which after the battle of Bladensburg seized the city of Washington for twenty-four hours. By then familiar with operations on shore, Cockburn provided support and guidance to the army throughout the campaign, for which, in reporting its success, Ross credited him with the idea of the attack on Washington. However, the idea had long been part of the strategy of Sir Alexander Cochrane, who succeeded Warren as commander-in-chief on the North American station early in 1814. Cockburn also accompanied Ross in the subsequent advance against Baltimore, and was with him in the skirmish on 12 September in which Ross was mortally wounded. Between January and March 1815, while Cochrane attempted to take New Orleans, Cockburn undertook diversionary attacks on the coast of Georgia from a base on Cumberland Island.

Cockburn was recalled to England following the conclusion of peace, only to find, on anchoring at Spithead on 4 May, that war with France had again broken out. He was ordered to hoist his flag on board the Northumberland and to convey Napoleon to St Helena, which he reached on 15 October. He remained there as governor of the island and commander-in-chief of the Cape of Good Hope station until the summer of 1816, when he was relieved by Sir Hudson Lowe and Sir Pulteney Malcolm. Having been nominated a KCB in January 1815, he was made GCB on 20 February 1818, became vice-admiral on 12 August 1819, and was elected a fellow of the Royal Society in 1820. He was a junior lord of the Admiralty between April 1818 and May 1827, a member of the council of the lord high admiral between May 1827 and September 1828, and then first naval lord until November 1830. In 1828 it was principally Cockburn, as the leading council member and a privy councillor, who brought about the resignation of the duke of Clarence as lord high admiral for exceeding the terms of his patent.

Although a tory, Cockburn served under the whigs as commander-in-chief on the North America and West Indies station between March 1833 and May 1836. He became a full admiral on 10 January 1837, and, although aged sixty-nine, he returned to the Admiralty as first naval lord from September 1841 until July 1846. There, far from being the reactionary as which he was later depicted by Sir John Briggs, he ensured that the latest steam and screw technology adopted by the Royal Navy was appropriate to its requirements. He maintained the navy's traditional priority of professionalism over politics in appointments, and held as a prime criterion for professionalism the ability to manage seamen without the need to resort to physical punishment. He was, when there was no alternative, for long a champion of impressment, but he had, by the time of his retirement, contributed to the system of examining masters and mates of merchant ships for their competency, the registration of which later joined the register of seamen, transferred from the Admiralty to the Board of Trade, to permit the foundation of a naval reserve.

Cockburn's views were fluently expressed in the House of Commons, in which he became tory MP for Portsmouth in 1818, for Weobley in 1820, for Plymouth in 1828, and for Ripon in 1841. He became admiral of the fleet on 1 July 1851. On 26 February 1852, by the death of his brother James without a son, he succeeded to the family baronetcy, a dignity he enjoyed until his death on 19 August 1853. Cockburn was buried in Kensal Green cemetery. He was succeeded in the baronetcy by his brother William, dean of York. He was survived by his wife, Mary, who died in January 1859. His daughter, Augusta, married Commander J. C. Hoseason, his adviser on steam technology, in 1856.

"Ambrosini" was born on 8th August 1810 and christened James Parker. He went to Italy to study painting for some years and whilst there married a Miss Scarrotti. Later in life he married Mary Hudson, widow of Archdeacon Hudson. "Ambrosini" died in April 1883 in Brecknock Road, Camden Town, near the junction with Hilldrop Road. He won an Academy Gold Medal and was appointed Portrait Painter to the Duchess of Kent. Mr Collins has nine portraits by him mostly of members of the family. In lists of artists and their works, James Parker Jérôme is called Miss Ambrosini Jérôme. Unfortunately, once an error is made, it is copied until it becomes fact! Most of his pictures are signed Ambrosini Jérôme or A. Jérôme as he found an Italian sounding name was better for business in the mid-19th Century.