The impact of the Industrial Revolution was first felt in the manufacture of fly lines. Instead of anglers twisting their own lines - a laborious and time-consuming process - the new textile spinning machines allowed for a variety of tapered lines to be easily manufactured and marketed.

British fly-fishing continued to develop in the 19th Century, with the emergence of fly fishing clubs, along with the appearance of several books on the subject of fly tying and fly fishing techniques. 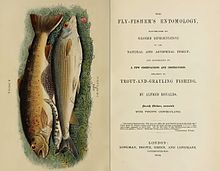 The Fly-fisher's Entomology by Alfred Ronalds had a great influence on the development of fly fishing when it was first published in 1836.

Alfred Ronalds took up the sport of fly fishing, learning the craft on the rivers Trent, Blythe and Dove. On the River Blythe, near what is today Creswell Green, Ronalds constructed a bankside fishing hut designed primarily as an observatory of trout behaviour in the river. From this hut, and elsewhere on his home rivers, Ronalds conducted experiments and formulated the ideas that eventually were published in The Fly-fisher's Entomologyin 1836.

He combined his knowledge of fly fishing with his skill as an engraver and printer, to lavish his work with 20 colour plates. It was the first comprehensive work related to the entomology associated with fly fishing and most fly-fishing historians credit Ronalds with setting a literature standard in 1836 that is still followed today.Describing methods, techniques and, most importantly, artificial flies, in a meaningful way for the angler and illustrating them in colour is a method of presentation that can be seen in most fly-fishing literature today.

The book was mostly about the aquatic insects—mayflies, caddisflies and stoneflies—that trout and grayling feed on and their counterpart artificial imitations. About half the book is devoted to observations of trout, their behaviour, and the methods and techniques used to catch them. Most of this information, although enhanced by Ronalds' experiences and observations, was merely an enhancement of Charles Bowlker's Art of Angling (first published in 1774 but still in print in 1836).

In Chapter IV - Of a Selection of Insects, and Their Imitations, Used in Fly Fishing - for the first time is discussed specific artificial fly imitations by name, associated with the corresponding natural insect. Organized by their month of appearance, Ronalds was the first author to begin the standardization of angler names for artificial flies. Prior to The Fly-fisher's Entomology, anglers had been given suggestions for artificial flies to be used on a particular river or at a particular time of the year, but those suggestions were never matched to specific natural insects the angler might encounter on the water. According to Ernest Schwiebert: "Ronalds is one of the major milestones in the entire literature of fly-fishing, and with his Entomology the scientific method has reached angling in full flower. Ronalds was completely original in its content and research, setting the yardstick for all subsequent discussion and illustration of aquatic fly hatches.