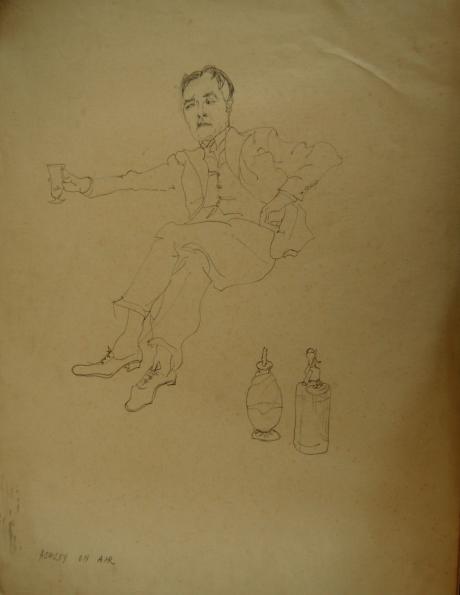 "ASHLEY ON AIR" and Further inscribed on the reverse "ASHLEY DUKES"

From the Artist's estate

Ashley Dukes, (1885–1959), playwright and theatre critic, was born on 29 May 1885 at Bridgwater, Somerset, the son of the Revd Edwin Joshua Dukes, Congregational minister, and his wife, Edith Mary Pope. Educated at Silcoates School, Yorkshire, he graduated in science at Manchester University in 1905 and went to London to lecture in science, though also (as he put it later) as ‘an aspirant to the humanities’. In London he became interested in the modern drama. The naturalistic methods—the staging rather than the acting—of the famous Edwardian productions of Harley Granville Barker at the Court Theatre dissatisfied him, and when in the early autumn of 1907 he had the opportunity of combining a postgraduate course at Munich University with private tutoring, he began eagerly to study the progressive German theatre on its own ground. He was abroad for two years, based first at Munich, and then, in 1908, at Zürich.

On Dukes's return to England in 1909 he became a full-time professional writer, and he acted as drama critic for A. R. Orage on the New Age (for this he received only 10s. a week), with freedom—as he said—‘to train the batteries of Continental criticism’ upon such writers as Barrie, Galsworthy, and Maugham. During 1910 the Stage Society put on the first of his plays, a comedy, Civil War; in 1911 he published his New Age essays on Modern Dramatists. In 1912–14 he was drama critic for Vanity Fair; in 1913–14 for The Star; and he also wrote short essays, known as ‘turnovers’, for The Globe.

In 1914 Dukes adapted for the Stage Society (Haymarket) Anatole France's Comedy of a Man who Married a Dumb Wife. He was thoroughly cosmopolitan, loving the European scene and reading widely in German and French. These early days indicated a future which was interrupted during the First World War by western front service in the machine-gun corps, from which he retired with the rank of major after holding every rank—except that of sergeant—between private and company commander. On 7 March 1918 he married the dancer Cyvia Myriam Ramberg (1888–1982) [see Rambert, Marie], daughter of Yakof Ramberg, a Polish publisher. She had studied with Émile Jaques-Dalcroze and later with Diaghilev; after leaving Diaghilev's company she went to London where she met Dukes.

During 1920–24 Dukes wrote drama criticism for the Illustrated Sporting and Dramatic News as well as contributing to the New Statesman and other journals. He adapted Georg Kaiser's From Morn to Midnight (1920) and Ernst Toller's The Machine Wreckers (1923) from their original German. But it was his own The Man with a Load of Mischief which established his name. This, produced at the New Theatre by the Stage Society in December 1924, ran for 261 performances at the Haymarket from June 1925 and in later years had revivals at three London theatres. It was a Regency fable by a man who had always cared for the spoken word in the theatre and whose poetic sense showed in his prose rhythms. The play excited people whose ears had become accustomed to the period's fashionably curt dialogue, which had reminded the actress Mrs Patrick Campbell of typewriters tapping away into the night. The plot was slight, set in an inn where a valet, a Jacobin, wooed a lady, and a lord was left in helpless anger, but the dialogue and Dukes's judgement and balance create a sense of enchantment.

The success of this comedy gave Dukes his independence. He made many other adaptations and dramatizations, notably two for Matheson Lang—Such Men are Dangerous (Duke of York's, 1928) from the German of Alfred Neumann's Der Patriot, and Jew Süss (Duke of York's, 1929) from Lion Feuchtwanger's novel—and Elizabeth of England, from the German of Ferdinand Bruckner, in which Lang also appeared (with Phyllis Neilson-Terry) at the Cambridge Theatre in 1931. Further, Dukes wrote a good deal of original work, including the heroic comedy The Song of Drums, or Ulenspiegel, performed at the Royal Flemish Theatre, Brussels, but not in London; The Fountain-Head, and Matchmaker's Arms. His other activities also show his preoccupation with theatre, especially European theatre. He acted as British delegate from the Critics' Circle at the International Congress of Critics in Paris (1926) and Salzburg (1927); he wrote the volume Drama (1926) for the Home University Library; and he became one of the editors of the international Theatre Arts Monthly.

In 1933 Dukes opened his own theatre, the Mercury, in a converted church hall in Ladbroke Road, close to his home in Campden Hill. He turned it eventually into a workshop for poets' drama and for his wife's Ballet Rambert, the senior English ballet company. The Mercury became his primary interest in this period, and its great day came in November 1935 when he brought T. S. Eliot's Murder in the Cathedral from the chapter house at Canterbury for a run of 225 nights. (It was transferred later to the West End.) Various other poets' plays—among them The Ascent of F6 by W. H. Auden and Christopher Isherwood—followed on Dukes's small stage; and the Mercury, governed by its owner's taste and urbanity, moved safely into the history of the theatre. Simultaneously, Dukes still worked for the West End, as in The Mask of Virtue (Ambassadors, 1935), a very free rendering of Carl Sternheim's Die Marquise von Arcis, in itself a dramatic version of a play by Denis Diderot; it was this which brought Vivien Leigh to the West End stage.

In 1945–9 Dukes held the kind of post for which no man was better fitted, despite its cumbrous title: theatre and music adviser, main headquarters Allied Control Commission for Germany (British element). Later in London, though he had to pause in his work at the Mercury, he continued his series of adaptations. Sir Donald Wolfit toured during 1958 in Dukes's versions of two German plays, Heinrich von Kleist's The Broken Jug and Frank Wedekind's The Maestro. Dukes died at the Princess Beatrice Hospital, London, on 4 May 1959; his wife (who was made a DBE in 1962) died in 1982. Two daughters survived them.

Ashley Dukes, a man of great charm and unobtrusive common sense, with the means to back his judgement, had much influence on the intellectual theatre of his time. Smilingly, he rejected any form of insularity; he was a European with a taste in wine as sure as his taste in the theatre and the fastidious cadences of his prose. The Man with a Load of Mischief and his one not very factual venture into autobiography, The Scene is Changed (1942), are likely to live on when much else in the theatrical record of the period is lost.