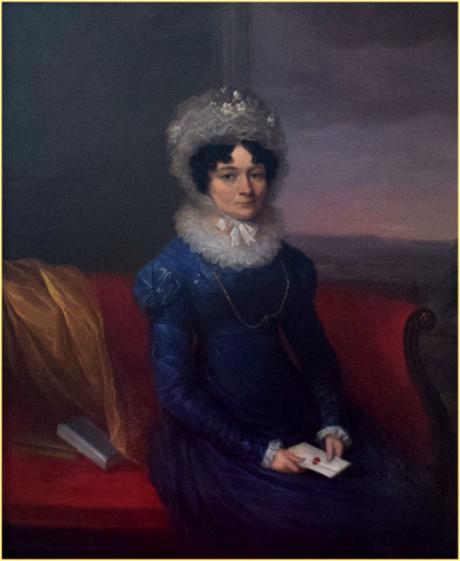 Catherine Hutton seated on a sofa holding a sealed letter with books beside her.

The Hutton Family of Gate Burton

Hutton, Catherine (1756–1846), novelist and letter-writer, was born on 11 February 1756, probably in Birmingham, the only surviving daughter of William Hutton (1723–1815), a Birmingham-based bookseller and topographer, and his wife, Sarah Cock (1731–1796). The family was a close and affectionate one, and, although she was tempted to marry, filial devotion prevented Catherine Hutton from ever leaving home. She nursed her mother through five years of illness before her death, and continued to care for her father in his old age. He repaid her with admiring sympathy: in his autobiographical Life, he praised both her character—she was ‘incapable of an ill-natured speech’—and her abilities—‘whatever lies within the bounds of female reach she ventures to undertake, and whatever she undertakes succeeds’ (Jewitt, 45).

From the ages of seven to fourteen Catherine Hutton attended an undistinguished day school in Birmingham; subsequently, she hoped to attend a boarding-school in Worcester, but was prevented by her father, and continued her own education at home. In Birmingham, she was in the midst of a stimulating scientific, intellectual, and religious community: her father, the author of a history of Birmingham, promoted the development of education and science in the city and, as a Unitarian, moved in progressive dissenting circles. Catherine herself joined Joseph Priestley's congregation in the 1780s, and became a friend of the radical novelist Robert Bage. The confidence of both Catherine Hutton and her contemporaries was, however, severely dented by the 1791 Birmingham Church and King riots: rioters attacked both William Hutton's town house and business, and his country house on the outskirts of Birmingham at Bennett's Hill, Washwood Heath.

From an early age, Catherine Hutton was a keen letter-writer. The Coltman family of Leicester and Mrs Andre of Enfield, Middlesex, were lifelong correspondents. She also wrote to her cousin the mathematician Charles Hutton (1737–1823), Sarah Harriet Burney (Fanny Burney's half-sister), the radical author Sir Richard Phillips, Eliza Cook, and, latterly, Edward Bulwer Lytton, and Charles Dickens. Her letters are full of anecdotes and shrewd observations on her acquaintance and are seasoned with a self-deprecating wit, their direct address and dry cheerfulness recalling the epistolary style of Jane Austen. Hutton delighted in Austen's novels, and believed that ‘her character is either something like mine, or what I would wish mine to be’ (Reminiscences, 183).

In 1778 Catherine Hutton visited London (the first of twenty-six visits) and became a keen tourist, travelling throughout England and Wales in the course of her life. Although she described herself as ‘a worshipper of mountains’ (Reminiscences, 118), her reflections were not limited to romantic commonplaces. She commented on the condition of inns and boarding-houses and the eccentricities of her fellow guests, and she visited industrial towns, factories, and (in 1801) a slave ship in Liverpool. Her observations were characteristically frank. She described Aberystwyth, which she visited in 1787, as ‘a poor, petty place’, uninfluenced by having received two proposals of marriage during her stay (ibid., 52). The spa town of Malvern, which she first visited in 1802, was more to her taste; she revisited it annually for the next thirty-two years.

In 1813 Catherine Hutton published The Miser Married: a Novel, which she dedicated to her father. An epistolary novel, it related the tale of the second marriage of debt-ridden and deceitful widow, Lady Montgomery, to the miserly Mr Winterdale. Her characterization was lively; she created fine cameos including Mrs Thacker, the vulgar parvenu wife of the local clergyman, and her nephew, the chatty and shallow Mr Sharp. She made attempts to imitate the orthography, as well as the style, of the lower-class characters. The extensive space given to descriptions of a tour of mid-Wales and to literary criticism of novels, including Bage's Hermsprong, foreshadowed features of her other novels. The Monthly Review of November 1813 praised the novel as ‘a promising first attempt’ (p. 326).

Hutton's next novel, The Welsh Mountaineer (1817), portrayed the country-bred maiden abroad in fashionable London, where her innocence highlights the corrupt superficiality of society life. The minimal plot often flags, burdened with lengthy descriptions of visits to the midlands and Scarborough. Oakwood Hall (1819), the last of Hutton's novels to be published but the first to be written, also contains much travel writing, although the concentration of the majority of the narration in the hands of Miss Oakwood, a shrewd middle-aged spinster, gives the novel a piquant unity absent from The Welsh Mountaineer. Although her novels are the most significant of her publications, Hutton published other works, including an edition of her father's autobiography (1815) and The Tour of Africa (1819–21), a selection from the writings of travellers in the dark continent, and left in manuscript a history of the queens of England. She also wrote about sixty pieces for periodicals. In 1827, she remarked wryly that writing for La Belle Assemblée ‘does not require exertion, and … keeps me from stagnating’ (Beale, 179).

In an account of her occupations written in July 1844, Catherine Hutton described some of the other activities which absorbed her: needlework, including ‘patchwork beyond all calculation’ (GM, 476); pastry and confectionery; collecting prints of costumes in 8 large volumes; and collecting more than 2000 autographs. By 1843 Catherine Hutton was losing her sight; she died on 13 March 1846 at Bennett's Hill, and was buried in a vault under Ward End church. Bridget Hill rightly concludes that her life ‘illustrates the particular problems of the educated, intelligent, single daughter of the middle class’ in late eighteenth- and early nineteenth-century Britain (Hill, 47).

Hutton became a friend of the scientist and discoverer of oxygen Joseph Priestley and the novelist Robert Bage. A keen letter-writer, she corresponded with, among others, Charles Dickens, Edward Bulwer-Lytton and her mathematician cousin Charles Hutton. She built up a collection of over two thousand letters, some of which were published after her death.

Hutton published a number of novels including The Miser Married: a Novel (1813) - itself partly written as a series of letters - The Welsh Mountaineer (1817) and Oakwood Hall (1819). She also wrote a history of the Queens of England and numerous pieces of journalism.

Hutton never married, and after the family home was burnt down in the riots of 1791, she took to company less and less. Two years after the riots she wrote to a friend: "Last Monday I broke the spell by visiting the Miss Mainwarings, and I was found so rusticated, so antiquaited, that the first thing they did was to take my cap to pieces and make it up in a different form. Now, mark my resolution. I visited three families on the three following days, and I have engaged myself for two evenings next week. Be so good when you write to say something about fashion, that I, who used to be an example, may not be quite a scare-crow".

Like her father, she was a prolific writer, and was putting pen to paper right up to her death at the ripe old age of 91. She was a particular fan of Jane Austen, as she explains "I have been going through a course of novels by lady authors, beginning with Mrs Brooke and ending with Miss Austen, who is my especial favourite. I had always wished, not daring to hope, that I might be something like Miss Austen; and, having finished her works, I took to my own, to see if I could find any resemblance". In 1813 she published her first novel, The Miser Married (view here), and other fiction was published in magazines, as well as articles and letters she wrote surrounding everyday matters.