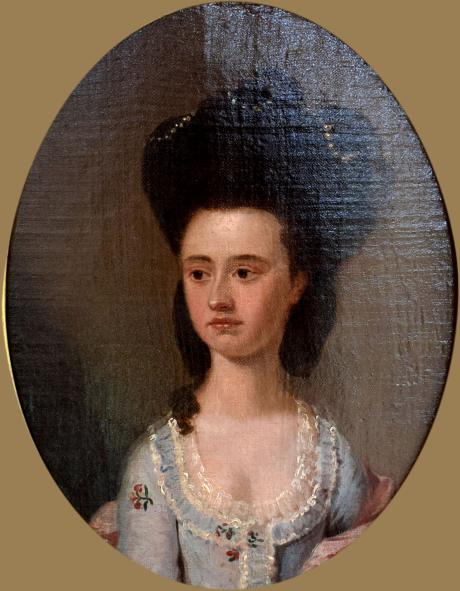 European Portraits of the 18th Century showed some women painted in the style of Turquerie or the Orientalist fashion imitating aspects of Turkish art and Culture which was relatively unknown and full of exotic symbolism.

Born in Dublin, Hickey was the son of Noah, a confectioner in Capel Street, and Anne Hickey. A younger brother was John Hickey, the sculptor. He was trained at the Royal Dublin Society schools under Robert West. Hickey painted primarily portraits and genre scenes. He traveled widely, working in India, Portugal, Italy and England, residing in Bathbetween 1776 and 1780. On his voyage to India, the vessel in which he was travelling was captured by French and Spanish fleets which led him to Lisbon, where, after receiving a number of commissions, he remained for several years. He eventually reached Bengal and stayed there until 1791 when he returned to England. He then traveled as far as Peking, China with George Macartney, 1st Earl Macartney as the expedition's official portrait painter.

He returned to Ireland shortly after the death of his brother John in January 1796. In 1797, he was commissioned by Dr. Robert Emmet, State Physician for Ireland, to paint a portrait of the doctor's son, Robert, and daughter, Mary. By 1798 he had returned to India where he landed just in time for the start of the Fourth Mysore War, which kept him engaged in painting. In Mysore he performed a number of sketch for family members of Tipu Sultan by commission. Portraits of Tipus sons, uncle and subaider are amongst these sketches. These portrait sketches were drawn between 1799-1801 in Srirangapatna and Vellore. He resided in Madras until his death in 1824. In addition to his artistic talents, he is reputed to have been a sparkling conversationalist who rarely failed to charm his sitters. The Courtauld Institute of Art (London), the Honolulu Museum of Art, the National Gallery of Ireland, the Tate and the Victoria Art Gallery (Bath, England) are among the public collections having paintings by Thomas Hickey. A number of his sketches can still be seen in Srirangapattana at Daria Daulat Bagh.