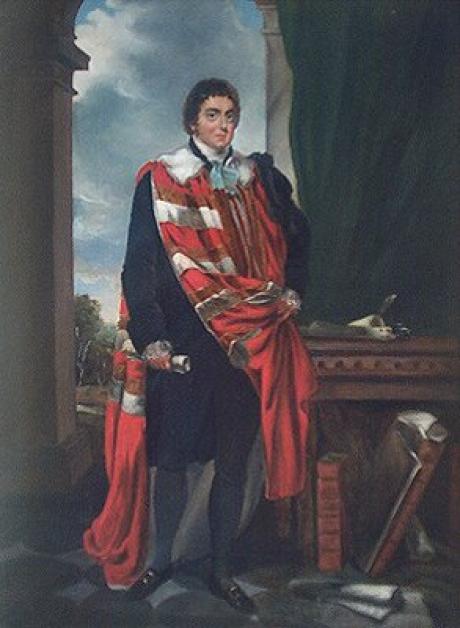 Russell, Francis, fifth duke of Bedford (1765–1802), agriculturist and politician, was born on 23 July 1765 and baptized on 20 August 1765 at St Giles-in-the-Fields, London, the eldest child of Francis Russell, marquess of Tavistock (1739–1767), politician, and Lady Elizabeth Keppel (1739–1768), daughter of William Keppel, second earl of Albemarle. His father was killed by a fall from his horse on 22 March 1767 and his mother died of consumption at Lisbon on 2 November 1768 at the age of twenty-eight. In 1771 he succeeded his grandfather, John Russell, fourth duke of Bedford. He was educated at Loughborough House, near London, and at the age of nine he entered Westminster School, going on to Trinity College, Cambridge, in 1780. He went on the grand tour in 1784 and returned in August 1786. He took his seat in the House of Lords on 5 December 1787. He had shown little interest in study, and was reputed hardly ever to have opened a book before he was twenty-four. In 1793, according to Lord Holland, he confessed that he was afraid to speak in the Lords for fear of not expressing himself in correct English.

Bedford's lifelong interest was in agriculture and estate management. The Bedford properties, scattered over eleven counties, were among the greatest estates of the period and they were already highly organized and efficiently run. Bedford became known as a leading promoter of agricultural improvement. The seventh duke claimed in 1897 that he was ‘among the first to initiate an agricultural system which was designed, some years later, to make the agricultural industry of Great Britain a model for the whole civilized world’ (Bedford, 26–7). He was an original member of the board of agriculture set up in 1793, and the first president of the Smithfield Club in 1798. He practised what he preached and established a model farm of 4000 acres at Woburn where he carried out pioneering experiments breeding cattle and sheep and growing crops; these were recorded by Arthur Young in his Annals of Agriculture (1795) for imitation by others. He was caricatured by Gillray as ‘the Bedfordshire Ox’ in his satire The Promised French Invasion in 1797. He instituted an annual agricultural fair at Woburn which lasted for several days and attracted farming enthusiasts from all over the country. These fairs were famous for their exhibitions of sheep-shearing, ploughing competitions, and other inducements to ‘improvement’, which he rewarded with prizes. His numerous guests were entertained at banquets at the end of the week's events, and he was a paternalistic landlord to his tenants and labourers who benefited from his benevolence. His successor continued these practices; the cost of pensions and other charities on his Bedfordshire and Buckinghamshire estates amounted in 1816 to over £44,000 (Beckett, 355).

Bedford was not only a model agricultural landlord but also a promoter of urban development. His London estates, totalling some 119 acres in the West End, Bloomsbury, Bedford New Town, and Covent Garden, had been marked out for development by his grandfather and, after the latter's death, his widow and her agent, Robert Palmer, embarked on ambitious building projects centred on what became Bedford Square, described by a modern architectural historian as ‘one of the most valuable relics of Georgian London’ (Summerson, 152). In 1800 Bedford obtained two acts of parliament for developing the Bloomsbury estate. Under the architect and developer James Burton and his later successor Thomas Cubitt, Bloomsbury Square, Russell Square, Tavistock Square, and the surrounding streets became a classic example of Georgian townscape, sadly diminished by modern alterations. By 1819, the rents of the London estates were yielding half of the family's considerable total income. The duke's great wealth made him a target for the satire of The Anti-Jacobin when he was accused of trying to evade the assessed taxes on twenty-five of his servants.

The Bedfords were already one of the leading whig political clans and the fifth duke was naturally drawn into that world. He was attracted to whig society, like many other young aristocrats of his day, at Devonshire House where Georgiana, duchess of Devonshire, her sister Lady Duncannon, and Lady Melbourne ruled the fashionable ton. They were captivated by Bedford's good looks, charm, and manners and nicknamed him Loo. He was a faithful friend to them all, and tried to help and advise them in their financial troubles, brought on by their addiction to gambling, and, in Lady Duncannon's case, her fraught relationship with Granville Leveson-Gower. She referred to him as ‘the truest and most steady of friends’ (Leveson-Gower, 1.99). His connection with their society also confirmed his attachment to Charles James Fox, who became his closest political mentor. Bedford disapproved of Grey's Association of the Friends of the People and its cause of parliamentary reform but, during the wilderness years for the Foxite whigs that followed the secession of the Portland whig leaders to Pitt, he remained true to Fox in opposition to Pitt's repression of popular liberties, despite Fox's praise of the French Revolution which, if it were introduced into England, would presumably have stripped him of his noble status. Fox was grateful for his support, and described him as ‘one of the main pillars of the party’, which was reduced to a handful in the House of Lords (Memorials and Correspondence, 3.67). In 1793 Bedford was one of the leading subscribers to a fund to pay Fox's debts and on his death in 1802 he left £5000 to Fox and an annuity of £250 to Miss Armitstead.

Overcoming his earlier diffidence, Bedford now became the Foxites' leading spokesman in the upper house. He was not a witty speaker, being too ‘intolerably prolix and heavy in style, to hold his audience’ (Turberville, 90). Lord Holland thought that he seemed ‘to treat the understandings of his adversaries with contempt’, but he paid tribute to his ‘fluency, his readiness in argument, and … above all, his intrepid avowal of every opinion which he held’. Despite ‘the absence of all sprightliness or classical ornament, and with the fault of prolixity, he became … a leading debater in the House, as well as a considerable man in the country’ (Holland, 1.145, 80–81). Bedford was also one of the intimate friends of the prince of Wales, and on 8 April 1795 was one of the two unmarried dukes who supported him (only too literally) at his wedding to Princess Caroline of Brunswick-Wolfenbüttel, when the bridegroom was evidently in a state of intoxication. In June 1795 on the prince's annuity bill he defended the prince's conduct, despite his extravagance, on the grounds of ‘his age, the situation in which he was placed, and the insufficiency of his income to support the splendour necessary for his rank’, saying that the ministers should have liquidated his debts and his father should have contributed to do so (Cobbett, Parl. hist., 22.128).

Bedford supported all Fox's initiatives from the House of Lords. He signed the protest against the suspension of habeas corpus on 22 May 1794, and on the 30th proposed the motion for peace with France which had been previously introduced in the Commons by Fox. In October 1795 he opposed the address, describing the ministry as ‘if not corrupt and despotic, at least weak and inefficient’ (Cobbett, Parl. hist., 32.193). In November he opposed Pitt's Treasonable Practices Bill which extended the law of treason to the advocacy of radical reform as ‘a daring attack and flagititious outrage on the liberty of the subject’ (ibid., 32.257). He also objected to the Seditious Meetings Bill which restricted the holding of political meetings, reminding his audience that the ‘lower orders’ would mainly be affected ‘but recollect that we are dependant on their labours for all desirable aspects of our situation—riches, honour and power’ (ibid., 32.249–50, 548–9). In May 1797 and March 1798 he moved for the dismissal of ministers, losing on both occasions by large majorities. He opposed the suspension of cash payments by the Bank of England in 1797, and in 1798 he joined Grey and Lauderdale in persuading Fox to secede from parliament as a protest against Pitt's regime, although he himself occasionally returned to the Lords. He did so in 1798 to vote against the income tax and to protest against the methods used to suppress the Irish rising as ‘a system of coercion … enforced … with a rigour shocking to humanity’, involving torture and burning of houses—‘practices so disgraceful to the British name’ (ibid., 34.204–7, 33.1517–18). In January 1801 he co-operated with Grey and Fitzwilliam in drawing up the opposition's amendment to the address, and after Pitt's resignation he advocated a coalition government, to include Addington and Fox, and was nominated for the office of lord president of the council, but the scheme came to nothing.

Perhaps Bedford's most famous intervention during the war years was his scathing criticism of Burke, whom the Foxites saw as an apostate for having accepted a pension from Pitt's government in 1796. His attack drew forth Burke's celebrated pamphlet A Letter to a Noble Lord (1796), in which he contrasted his pension as a reward for services to his country with the grants received in the past by Bedford's family, which ‘were so enormous as not only to outrage economy, but even to stagger credibility’ (Writings and Speeches, 9/1.164). He described his adversary as

the leviathan among the creatures of the crown. … His ribs, his fins, his whalebone, his blubber, the very spiracles through which he spouts a torrent of brine against his origin, and covers me all over with the spray—everything of him and about him is from the Throne. Is it for him to question the dispensation of the Royal favour? (ibid.)

In contrast to Burke, Bedford had been ‘swaddled and rocked and dandled into a legislator’: his support of (alleged) revolutionary principles endangered ‘the safety of that Constitution which secures his own utility or his own ignificance’ (ibid., 9/1.160, 171).

Bedford did not marry but he had two children with a mistress, Mrs Palmer. In 1802, at the age of thirty-six, to the great distress of the ladies at Devonshire House, he announced his engagement to Lady Georgiana Gordon, daughter of Jane, duchess of Gordon, the former intimate of Pitt. Within a month, however, he was dead, having died at his seat, Woburn Abbey, on 2 March 1802 from a strangulated hernia, sustained when playing tennis. He bequeathed his personal estate to his brother and heir, Lord John Russell (1766–1839), who became the sixth duke and who married his brother's intended bride in 1803. He was buried at night on 10 March at Chenies, Buckinghamshire, one of his properties. Fox and Sheridan eulogized him in the House of Commons, and Lord Holland paid tribute to his judgement, integrity, talents, and personal qualities: ‘His heart was affectionate, and he joined to all these qualifications great firmness of mind and the purest simplicity of manners that I ever knew … he was truth itself, … always plain, undisguised truth and real benevolence’ (Holland, 1.146). Lady Bessborough praised his patriotism: ‘I am convinced that … he would sacrifice his fortune and life to what he thought his duty and the real good of the country’ (Leveson-Gower, 1.208). Bedford's statue by Westmacott was erected in Russell Square in 1809, and shows him with one hand resting on a plough, the other holding some ears of corn.