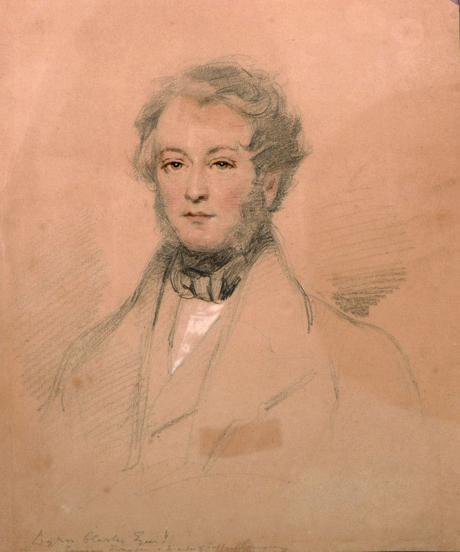 Son of a City merchant, Le Gros Clark was born in Mincing Lane and was apprenticed to Benjamin Travers at St Thomas's Hospital two years after the separation of the Borough Hospitals. He won the Cheselden Medal in 1830, and was for a time Assistant Demonstrator of Anatomy at the University of Dublin. In 1839 he became Lecturer on Anatomy and Physiology, and in 1843, on the sudden death of Frederick Tyrrell, he was appointed Assistant Surgeon at St Thomas's. As such, and as Lecturer on Descriptive and Surgical Anatomy, he continued until 1853, when he became full Surgeon on the retirement of John Flint South (qv), and was appointed to the Chair of Surgery. He continued as Surgeon and as Lecturer till 1873, when Sir William MacCormac succeeded him. His relation to the College of Surgeons was distinguished. He became a Member in 1833, a Fellow in 1843, was Member of Council from 1864-1879, Member of the Court of Examiners from 1870-1880, Chairman of the Midwifery Board in 1873, Vice-President in 1872 and 1873, and President in 1874. He was Hunterian Orator in 1875, held the Arris and Gale Lectureship in 1867-8, and the Hunterian Professorship of Surgery and Pathology in 1868-9. He was well known for his course of lectures delivered at the College on the subject of "The Principles of Surgical Diagnosis, especially in relation to Shock and Visceral Lesions". Other notable works from his pen were The Anatomy and Physiology of the Nervous System, 1836, his translation of Dupuytren's Diseases and Injuries of the Bones, and his Outlines of Surgery, 1863. His most important paper read before the Royal Society, to which he was elected a Fellow in 1872, was "On the Actions of Muscles in Respiration".

For some years he was Surgeon to the Magdalen Hospital and to the London Female Penitentiary. He was also Consulting Surgeon to the Surrey County Hospital and to the Great Northern Hospital. But an appointment which threw him more into contact with the leading surgical and medical workers of the day was that of Surgical Secretary to the Medico-Chirurgical Society, where Dr George Cursham and Dr W Baly were successively his medical colleagues.

In his early days Clark resided in Spring Gardens, Charing Cross, then a centre for surgical celebrities, near Bransby Cooper and Partridge. Bransby Cooper was specially kind to him, and told him many tales of his uncle Sir Astley Cooper; but he was a rough and uncultivated though genial man, and did not impress Le Gros Clark as a scientific surgeon. It was the wish of the authorities at the hospital that Clark should have rooms nearer St Thomas's, and he moved to St Thomas's Street and had a country house at Lee. In 1871, however, he purchased a property near Sevenoaks, where he was surrounded by beautiful scenery and the comforts of a charming home. Here he lived for many years, and here he died, holding still his office of Consulting Surgeon to the South-Eastern line, which ran close by his house, and being frequently called in to the Cottage Hospital for his opinion as Consulting Surgeon. He was able from Sevenoaks to pay frequent visits to his old hospital and to Salters' Hall, where he was twice Master at twenty years' interval, and an active member of the governing body.

Clark spent part of his holidays in visiting the continental schools as well as those of Dublin and Edinburgh. In Germany he was familiar with the work of Dieffenbach, von Graefe, and the elder Langenbeck in Paris with Dupuytren, and he had a great admiration for Roux.

As a Governor of St Thomas's and Consulting Surgeon he always took an active interest in the progress of the School. As a hospital surgeon it would be difficult to find anyone who ranked higher in those days. His opinion was always greatly esteemed. He prided himself upon his 'tactus eruditus' and could distinguish deep fluctuation when others failed. His judgement was calm and scientific, leaning rather to what was within proof and certainty, not swayed by the opinions of others, but always attentive to their criticisms. He was not only a distinguished surgeon, but a wise and safe one. Scientific surgery was his aim, and his thoughts and work were constantly in this direction. As an operator he was careful, deliberate, and not wanting in boldness. As a clinical teacher he was followed by an attentive class, who learnt something more than mere surgery: they learnt how to treat patients with kindness, thoroughness, and courtesy. Human nature was ever a study for him and patients were not looked on as mere cases.

He died at The Thorns, Sevenoaks, on July 19th, 1892. Besides his many surgical appointments he was well known in civic and public life, from his connection with the Salters' Company. "Mr Clark", says his biographer in the British Medical Journal, "was a splendid representative of the educated surgeons of the older school - a man of high general culture, versed in all the professional lore that the home and continental schools of his time could teach, and conspicuous for operative skill in the days when the operator required facilities that modern science has rendered less essential."

His personality was peculiarly attractive. All who knew him can easily recall the tall, strong, upright figure that retained its symmetry to the end, the clearly cut aristocratic features that only grew more handsome with advance of years, and the dignified courtesy of manner that so perfectly harmonized with his stately physique. He had a high intellectual forehead, heavy eyebrows overhanging keen deepset eyes, making an impressive and dignified countenance, and although severe, yet kindly withal; but it was not given to all to know the simplicity and gentle kindliness of nature, masked as it was by the rather stern lines that early sorrow had graven on his face. In his youth, according to Strohmeyer, he was known as 'le beau' as well as Le Gros Clark. He was, in short, a polished, courtier-like gentleman, slightly austere in manner, but honest, unaffected, and true. His nephew, Wilfrid Edward Le Gros Clark, FRCS, distinguished himself by research in anatomy; he was appointed Professor of Anatomy at St Bartholomew's Hospital in 1927, and returned to the Chair of Anatomy at St Thomas's Hospital in 1929.

There is a portrait of Frederick Le Gros Clark in the re-issue of MacCormac's "Lives of the Presidents" in his Address of Welcome, 1900, p172. There is also a photograph in the Fellows' Album.

William Carpenter (1818–1899) was a watercolour artist. He travelled for six or seven years in the 1850s painting scenes of India, its people and its life. The Victoria and Albert Museum bought over 280 of his paintings.  In 1856 he painted Prince Fakhr-ud Din Mirza, the eldest son of Bahadur Shah II, the last King of Delhi, five months before the Prince died.

William Carpenter was born in about 1818. He was the eldest son of William Hookham Carpenter and his wife, Margaret Carpenter(born Geddes). His father was a keeper at the British Museum and his mother was a noted portrait artist. William entered the Royal Academy Schools in 1835. He initially painted with oils but quickly took to water colour. William followed his brother abroad in the early 1850s and painted in India for some years. Other British painters, such as Johann Zoffany and Ozias Humphrey, were travelling in India too. Carpenter kept no diary, however his large collection of dated watercolour paintings allows his journey to be recreated. He travelled overland through Egypt and arrived in Bombay in June 1850. Almost immediately he travelled to Poona where others were escaping the heat in the mountains. By the time he returned to Bombay in about December he had painted a school in the old Maratha Palace and views of the Shaniwar Palace. He saw the new year in whilst visiting Salsette Island, after he had spent Christmas Day painting Mount Mary's Basilica at Bandra. His paintings included a view of the Mahim Causeway which had recently been built to join Salsette island to the mainland.

Carpenter's painting of Tara Chand in June or July 1851

In 1851, Carpenter met Tara Chand, the court painter to Maharana Sarup Singh of Udaipur and recorded that meeting with a painting of the Indian artist and his two sons. The painting shows Chand drawing – so he may have been drawing Carpenter at the same time.Carpenter paintedlandscapes and portraits of local rulers. He made three annual trips to Kashmir in 1853, 1854 and 1855. Carpenter painted the Golden Temple of Amritsar in 1854.He travelled through thePunjab, Afghanistan and then to Rajasthan before returning to England in 1857. An important painting he returned with was a portrait of Prince Fakhr-ud Din Mirza, who was the eldest son of Bahadur Shah II, which he completed in February 1856.The prince died five months later, in July 1856. He and Carpenter missed the Indian Rebellion of 1857 when his brothers were killed.After his return Carpenter was able to sell his paintings as the basis of stories to the Illustrated London News. Carpenter later travelled to Boston, Massachusetts and was there in 1866, but it is not known how long he spent in America.

Carpenter had a one-man exhibition in South Kensington Museum in 1881 which included 275 paintings. After the exhibition all of the paintings were purchased by the new Victoria and Albert Museum.The museum still has dozens of his paintings which record India in the 1850s and at least one other painting that it bought in 1884 which still uses India as its subject.