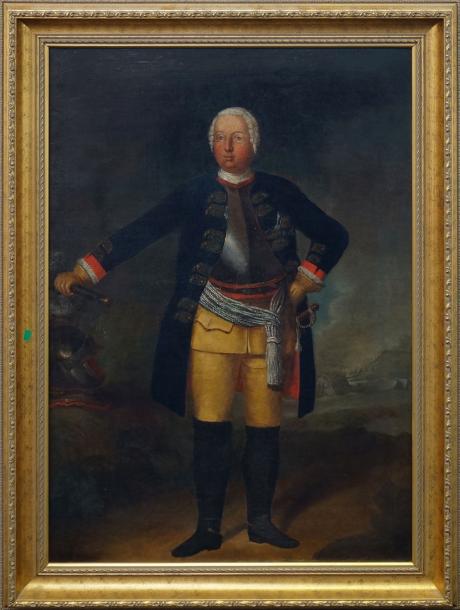 Frederick William I (German: Friedrich Wilhelm I) (14 August 1688 – 31 May 1740), known as the 'Soldier King, was the King in Prussia and Elector of Brandenburg from 1713 until his death. He was in personal union the sovereign prince of the Principality of Neuchâtel. He was born in Berlin to Frederick I of Prussia and Sophia Charlotte of Hanover. His father had successfully acquired the title King for the margraves of Brandenburg. During his own reign, Frederick William I did much to centralize and improve Prussia. He replaced mandatory military service among the middle class with an annual tax, established schools, and resettled East Prussia (which had been devastated by the plague in 1709).

The king encouraged farming, reclaimed marshes, stored grain in good times and sold it in bad times. He dictated the manual of Regulations for State Officials, containing 35 chapters and 297 paragraphs in which every public servant in Prussia could find his duties precisely set out: a minister or councillor failing to attend a committee meeting, for example, would lose six months' pay; if he absented himself a second time, he would be discharged from the royal service.

In short, Frederick William I concerned himself with every aspect of his relatively small country, planning to satisfy all that was needed for Prussia to defend itself. His rule was absolutist and he was a firm autocrat. He practiced rigid, frugal economy, never started a war, and led a simple and austere lifestyle, in contrast to the lavish court his father had presided over. At his death, there was a large surplus in the royal treasury (which was kept in the cellar of the royal palace). He intervened briefly in the Great Northern War in order to gain a portion of Swedish Pomerania. More significantly, the "Soldier-King" had made considerable reforms to the Prussian army's training, tactics and conscription program—introducing the canton system and leaving his son Frederick with a formidable weapon with which to build Prussia's power. The observation that "the pen is mightier than the sword" has sometimes been attributed to him. (See as well: “Prussian virtues”.) Although a highly effective ruler, Frederick William had a violent temper; this was exacerbated by his inherited porphyritic illness, which gave him gout, obesity and frequent stomach pains.

Frederick William died in 1740 at age 51 and was interred at the Garrison Church in Potsdam. During World War II, in order to protect it from advancing allied forces, Hitler ordered the king’s coffin, as well as those of Frederick the Great and Paul von Hindenburg, into hiding, first to Berlin and later to a salt mine outside of Bernterode. The coffins were later discovered by occupying American Forces, who re-interred the bodies in St. Elisabeth's Church in Marburg in 1946. In 1953 the coffin was moved to Burg Hohenzollern, where it remained until 1991, when it was finally laid to rest on the steps of the altar in the Kaiser Friedrich Mausoleum in the Church of Peace on the palace grounds of Sanssouci. The original black marble sarcophagus collapsed at Burg Hohenzollern—the current one is a copper copy.

His eldest surviving son was Frederick II (Fritz), born in 1712. Frederick William wanted him to become a fine soldier. As a small child, Fritz was awakened each morning by the firing of a cannon. At the age of 6, he was given his own regiment of children to drill as cadets, and a year later, he was given a miniature arsenal.

The love and affection Frederick William had for his heir initially was soon destroyed due to their increasingly different personalities. Frederick William ordered Fritz to undergo a minimal education, live a simple Protestant lifestyle, and focus on the Army and statesmanship as he had. However, the intellectual Fritz was more interested in music, books and French culture, which were forbidden by his father as decadent and unmanly. As Fritz's defiance for his father's rules increased, Frederick William would frequently beat or humiliate Fritz (he preferred his younger sibling August William). Fritz was beaten for being thrown off a bolting horse and wearing gloves in cold weather. After the prince attempted to flee to England with his tutor, Hans Hermann von Katte, the enraged King had Katte executed before the eyes of the prince, who himself was court-martialled. The court declared itself not competent in this case. Whether it was the king's intention to have his son executed as well (as Voltaire claims) is not clear. However, the Holy Roman Emperor Charles VI intervened, claiming that a prince could only be tried by the Imperial Diet of the Holy Roman Empire itself. Frederick was imprisoned in the Fortress of Küstrin from 2 September to 19 November 1731 and exiled from court until February 1732, during which time he was rigorously schooled in matters of state. After achieving a measure of reconciliation, Frederick William had his son married to Princess Elizabeth of Brunswick-Wolfenbüttel, whom Frederick despised, but then allowed him to indulge in his musical and literary interests again.

Although the relationship between Frederick William and Frederick was clearly hostile, Frederick himself later wrote that his father "penetrated and understood great objectives, and knew the best interests of his country better than any minister or general." Frederick William married his first cousin Sophia Dorothea of Hanover, George II's younger sister (daughter of his uncle, King George I of Great Britain and Sophia Dorothea of Celle) on 28 November 1706. Frederick William was faithful and loving to his wife [6] but they did not have a happy relationship: Sophia Dorothea feared his unpredictable temper and resented him, both for allowing her no influence at court and for refusing to marry her children to their English cousins. She also abhorred his cruelty towards their son and heir Frederick (with whom she was close), although rather than trying to mend the relationship between father and son she frequently spurred Frederick on in his defiance. They had fourteen children, including:

He was the godfather of the Prussian envoy Friedrich Wilhelm von Thulemeyer and of his grand-nephew, Prince Edward Augustus of Great Britain.

Antoine Pesne  (29 May 1683 – 5 August 1757) was a French-born court painter of Prussia. Starting in the manner of baroque, he became one of the fathers of rococo in painting. Born in Paris, Pesne first studied art under his father and uncle. From 1704 to 1710 he received a stipend for advanced training at theAcadémie Royale in Italy. In 1710, he was called to Berlin by King Frederick I of Prussia.

As the director of the BerlinAcademy of the Arts from 1722, Pesne became famous through his portraits of the Prussian royal family and their household. Many of his portraits hang in Berlin Museums and in Charlottenburg Palace. These include (among others) his portraits of the first two kings of Prussia, Frederich I and Frederick William I, and members of the latter's family. In St. Agnus Church in Köthen, where J. S. Bach was music director (Kapellmeister), there is a huge portrait of the donor Gisela Agnes, Princess of Anhalt-Köthen, painted by Pesne in 1713. The ceiling paintings in Charlottenburg, Rheinsberg, and Sanssouci Palaces are at least partially his work.

In 1746 Pesne received from king Frederick II property and construction material to erect a house at Oberwallstraße 3 in Berlin, where he lived until his death in 1757. His grave is preserved in the Protestant Friedhof I der Jerusalems- und Neuen Kirchengemeinde (Cemetery No. I of the congregations of Jerusalem's Church and New Church) in Berlin-Kreuzberg, south of Hallesches Tor.