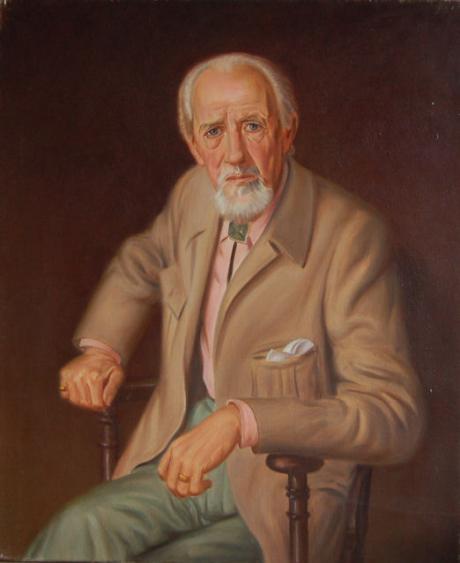 By direct family descent from the artist's studio

Fyfe Robertson (19 August 1902 – 4 February 1987) was a Scottish television journalist.He was born in Edinburgh, Scotland, and christened James. He was one of six children of Jane Dunlop and James Robertson, a miner, who became a minister in the United Free Church of Scotland. He grew up in poverty but attended the High School of Glasgow. After briefly studying medicine at Glasgow University, he became a reporter firstly with the Glasgow Herald and later in London with the Daily Herald and Daily Express.In 1943 Robertson joined Picture Post magazine where he was picture editor and feature writer. His investigative abilities led to a crucial exposé of the Tanganyika groundnut scheme. His report was quoted in the House of Commons.When Picture Post closed in 1957, he went to work in television. He is chiefly remembered for his association with the BBC programme Tonight. His bearded, haggard face topped by a tweed trilby hat and a slow over-emphatic Scottish voice became well known (usually introducing his reportage with a characteristic "Hellooo therrr, I'm Fyfe Robertson"), which led to parodies on radio comedy shows: firstly by Bill Pertwee on Beyond Our Ken as "Rife Hobertson", and also by Graeme Garden (a fellow Scot) on I'm Sorry I'll Read That Again, who began every item with an alleged Robertson catchphrase "I'm standing here...". For Tonight Robertson travelled widely providing serious stories as well as finding some remarkable eccentrics; he was often described as "our roving reporter".When Tonight was replaced by 24 Hours, Robertson continued in his same investigative manner. He presented a series for BBC television, Brush Off the Dust, in which he visited several British museums, commenting on their collections, and in 1975 presented a series, Robbie, which ran for three seasons until 1977.Despite being a heavy smoker, he remained in good health and whilst in his late 60s he took part in two exhausting televised expeditions, across the Scottish Highlands on horseback and paddling down the Severn in a canoe. He married Elizabeth (Betty) Smith in 1928 and the couple had two daughters, Elizabeth, a singer and conductor, and Grace, a well known photographer. Betty died in 1973 but Robertson married Vera Ford in 1978. In 1986 he experienced a heart attack shortly after appearing as a guest on This is Your Life for Cliff Michelmore. He died in Eastbourne in 1987.