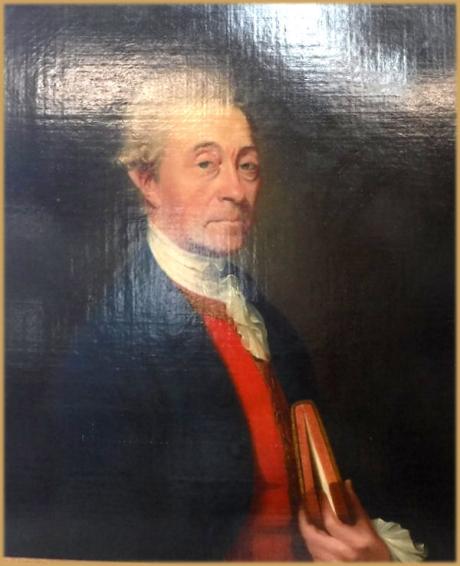 Tilly Kettle, (1735–1786), portrait painter, was born on 31 January 1735, at 4 Silver Street, London, the third of six children of Henry Kettle (c.1704–c.1773), a coach-painter, and his wife, Ann. Since 1640 five successive generations of the Kettle family had been freemen of the Brewers' Company, although both Tilly Kettle's father and grandfather worked as painters. Kettle may have received some elementary training from his father, who exhibited a ‘cilindrical picture; one side a conversation, the other a sleeping Venus’ at the Society of Artists in 1772. The only surviving work by Henry Kettle is an unusual panel painting, ‘An Anamorphic Vanitas’, signed in mirror writing, and which was sold in America in 1997 (ex Christies, New York, 23 May 1997, lot 34).

Tilly Kettle attended William Shipley's drawing school in the Strand, London, where he was a fellow pupil of the architect James Gandon. From there he may have progressed to the St Martin's Lane Academy and the duke of Richmond's sculpture gallery, although this has not been firmly established. During the early 1750s he was introduced to Joshua Reynolds, whose portrait of his pupil Giuseppe Marchi (RA) Kettle copied with minor alterations to the draperies. According to Gandon, when Kettle returned the original he was complimented on the quality of his copy by Reynolds, ‘who, however, excused himself from lending any more pictures’ (Gandon and Mulvany, 204).

Kettle's earliest identified portrait, a self-portrait of 1760 (priv. coll.), displays the formative influence of Reynolds on his portrait style. His first exhibited work was an unidentified half-length female portrait, which he showed at the Free Society of Artists in 1761. By 1762 Kettle was busy repairing Robert Streater's allegorical ceiling painting at the Sheldonian Theatre, Oxford, during which time he also painted the portrait of Dr Francis Yarborough, principal of Brasenose College, which is signed and dated 1763. Both commissions were probably secured by his friend and patron Sir Richard Kaye, bt, dean of Lincoln, who introduced him to new clientele over the next few years. From the end of 1762 until about 1764 Kettle worked between Oxford and the midlands. During this time he painted the poet Anna Seward (NPG) and her elder sister, Sarah, as well as numerous portraits of the family of William Legge, second earl of Dartmouth and Sir John Holte, both of whom were related to Kaye. Through these connections he also painted a series of portraits of the Edwards family, including Gerard Ann Edwards, son of the celebrated heiress Mary Edwards.

In 1764 Kettle was invited to take up the livery of the Brewers' Company, although he seems not to have responded. The following year he exhibited three works at the Society of Artists, including a full-length portrait of the actress Mrs Yates as the Chinese Princess Mandane in Arthur Murphy's adaptation of Voltaire's novel The Orphan of China (Tate Collection). In the exhibition catalogue he registered his address as Great Queen Street, Lincoln's Inn Fields, London, although by 1767 he was living in Conduit Street. He continued to exhibit portraits at the Society of Artists until 1776, after which he switched his allegiance to the Royal Academy. In 1767 Kettle exhibited a portrait of Miss Eliot as Juno, in the manner of Reynolds, and the following year showed an ambitious group portrait entitled An Admiral in his Cabin Issuing his Orders, a portrait of Vice-Admiral Sir Samuel Cornish with Rear-Admiral Sir Richard Kempenfelt and Cornish's secretary, Thomas Parry.

In August 1768 Kettle, possibly encouraged by Cornish, petitioned the East India Company to travel to Bengal to work as an artist. On 21 September permission was granted, and on 27 September securities of £1000 were given by his father and William Arnold, of Walbrook. Kettle set sail on 24 December 1768, on board the Nottingham, carrying letters of recommendation from Admiral Cornish and Laurence Sulivan, a director of the East India Company. Kettle, the first professional British artist to make a career in India, arrived in Madras on 2 May 1769.

Kettle spent two years in Madras, among his first commissions a portrait of Lord Pigot, former governor of Madras (priv. coll.), which he had begun before his departure from England. His clientele at this time consisted of nabobs, merchants, and army officers. He also painted a group portrait of Muhammad Ali Khan, nawab of Arcot, with his five sons, which Kettle exhibited at the Society of Artists in 1771, as well as a single full-length portrait of the same sitter (V&A), which he painted of his own volition. More unusual was a series of genre pictures, including Dancing Girls (Blacks) (National Gallery of Modern Art, New Delhi), which he exhibited at the Society of Artists in 1772, and a suttee scene showing a woman preparing for self-immolation on her husband's funeral pyre, which was probably displayed at the Free Society of Artists in 1776 as The ceremony of a gentoo woman taking leave of her relations and distributing her jewels prior to ascending the funeral pyre of her deceased husband.

By late 1771 Kettle was in Calcutta, where he stayed briefly before travelling to Fyzabad, at the invitation of Shuja ud-Daula, nawab of Oudh, whose portrait he painted on several occasions during the following year, including a full length with his son (Musée de Versailles, France). In addition to those surviving works from this period, notably the Dancing-Girl Holding the Stem of a Hookah (Yale U. CBA), further pictures are known through copies by local Indian artists. During this time Kettle took an Indian bibi, or mistress, who bore him two daughters, Ann and Elizabeth, who were baptized in Calcutta respectively on 22 February 1773 and 30 April 1774.

Kettle presumably returned to Calcutta by early 1773, where he stayed for three years. Among his numerous commissions were a large double portrait of Charles and John Sealy (Courtauld Inst.), Sir Elijah Impey, first chief justice of the supreme court (formerly high court, Dacca, Bangladesh, since des.), and Warren Hastings, whom Kettle painted on at least three separate occasions.

On 30 March 1776 Kettle left Calcutta on board the Talbot, arriving in London in mid-November. Following what must have been a whirlwind courtship, he married Mary (1753–1798), younger daughter of the architect James Paine, on 23 February 1777. In a pre-nuptial settlement, dated 22 February, Paine provided £5000, and Kettle the sum of £3000, towards a trust fund. According to the sculptor Joseph Nollekens, the marriage was not a love-match but the result of Paine's ‘shuffling, sordid, and dirty conduct’ (Milner, 75). Initially Kettle and his wife lived in Berners Street, London, while a grander house was prepared for the couple in Bond Street. In 1777 Kettle also began to exhibit at the Royal Academy, showing his works there intermittently until 1783. Finding it difficult to attract new clientele, Kettle relied at this time upon the network of patrons established in India. These included Josias Dupré, a former governor of Madras, Rear-Admiral Richard Kempenfelt, and Sir Robert Barker, who commissioned a large picture entitled Shah Alam, Mughal emperor, reviewing the 3rd brigade of the East India Company's troops at Allahbad (Victoria Memorial, Calcutta). More successful were his more intimate portraits, notably the double portraits of two girls, Elizabeth and Mary Davidson (Dulwich Picture Gallery, London), whose father Kettle had painted in India when he worked for the East India Company. Following his marriage Kettle had two further children, a daughter, Mary, and a son, James, born in November 1782. By now, however, Kettle was experiencing financial problems, which finally forced him, in 1783, to vacate his house in Bond Street. The precise reasons for Kettle's ruin are unknown, his friend James Gandon stating merely that his marriage had ‘proved unfortunate and expensive … difficulties and demands of various kinds interfering with his professional pursuits’ (Milner, 78). Pursued by creditors, Kettle travelled to Ireland, where he stayed briefly, before deciding to return to India.

On 9 June 1786 Kettle made a will, in which he gave his address as Brussels, a ruse, it has been suggested, to evade his creditors (Milner, 79). Shortly afterwards he set out over land for India. By July he had reached Aleppo, where he painted what may have been his last portrait, The Turkish Janissary of the English Factory, Aleppo (priv. coll.). Kettle is thought to have died some time before the end of 1786, possibly in the desert on his way to Basrah, although the exact date and circumstances of his death are unknown. His will was registered at the British cancellaria in Aleppo on 5 July 1787. Kettle's wife died at her sister's house in Gloucester Place, London, in April 1798, bequeathing £5000 each to her son and daughter. In 1810 Kettle's son enlisted in the British army in India, where he died in 1819.