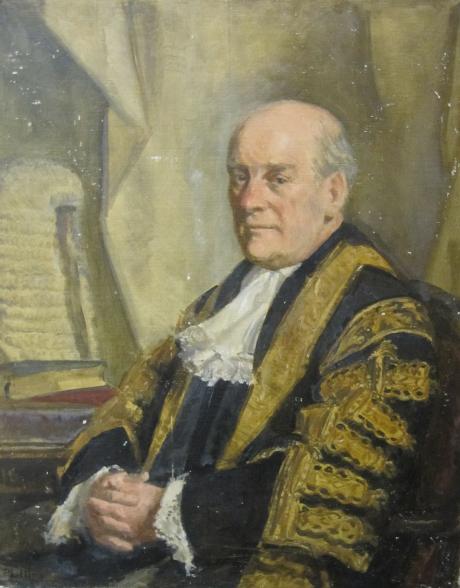 Geoffrey Lawrence, third Baron Trevethin and first Baron Oaksey (1880–1971), judge, was born in London on 2 December 1880, the youngest in the family of three sons and one daughter of Sir Alfred Tristram Lawrence (later first Baron Trevethin) (1843–1936), lord chief justice of England in 1921–2, and his first cousin Jessie Elizabeth (d. 1931), daughter of George Lawrence. After Haileybury College where he was senior to C. R. Attlee, Lawrence went to New College, Oxford. He received a third class in literae humaniores in 1903. Lawrence was called to the bar at the Inner Temple in 1906 (bencher 1932, treasurer 1955), and had a steady unspectacular career with such positions as counsel to the Jockey Club, chairman of Wiltshire quarter sessions, and recorder of Oxford. From 1928 to 1932 he was attorney-general to the prince of Wales. In 1925 he took silk, and in April 1932 he was appointed a judge of the King's Bench Division, being appointed a lord justice of appeal in 1944. He was sworn of the privy council in 1944, and was elected an honorary fellow of New College in the same year. In April 1947 he was appointed a lord of appeal in ordinary, having already been granted in January a hereditary peerage in recognition of his work at the international tribunal at Nuremberg (1945–6). In 1947 Oxford awarded him the honorary degree of DCL. Lawrence's work at Nuremberg was of an international significance which surpassed anything he had done as a puisne judge or was to do as a law lord. The twenty-one defendants were accused of enormous wrongdoing before and during the Second World War in an indictment which took two days to read and 218 days to try before a tribunal composed of two judges from each of the four victorious countries. The documentation was vast, and the prosecuting teams of unequal strength, the British under Sir David Maxwell Fyfe being the strongest. Lawrence was elected British president, and discharged his difficult task with a calmness, courtesy, and firmness which won universal approval, even from the defendants, the soldiers among whom thought that their problems were appreciated by one who had been made DSO as a gunner officer in the First World War. Praise was also given by the British alternate judge, Sir Norman Birkett, who was secretly resentful that he had not been chosen for the post. He was passed over not because of Attlee's undisguised preference for products of Haileybury, but because the Foreign Office insisted on a more senior judge. After Nuremberg, Oaksey, as he became, found it difficult to adjust to the work of a law lord. His brief judgments were conscientiously prepared, but his heart did not seem to be in the job. In appearance Oaksey was a sturdy figure, slightly below middle height, prematurely bald, with the fresh complexion and unhurried manner of an English gentleman who was interested in country life. He could sometimes be induced to talk about his presidency of the Guernsey Cattle Society, but never about his presidency of the international tribunal. After exactly twenty-five years on the bench, Oaksey retired in April 1957. In June 1959 he inherited from a brother his father's barony of Trevethin, but he continued to be styled Oaksey. On 22 December 1921 Lawrence married Marjorie Frances Alice (d. 1984), youngest daughter of Commander Charles Napier Robinson RN; they had one son and three daughters. Oaksey died in Oaksey, Malmesbury, Wiltshire, on 28 August 1971 and was succeeded in both baronies by his son, John Geoffrey Tristram (b. 1929). R. F. V. Heuston DNB