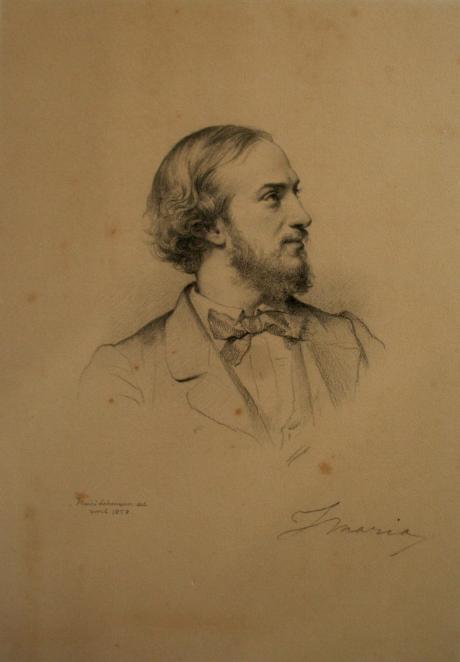 signed and dated " avril 1858" and further signed by the sitter

Giovanni Matteo De Candia, also known as Mario (17 October 1810 – 11 December 1883), was an Italian opera singer. The most celebrated tenor of his era, he was lionized by audiences in Paris and London. He was married[citation needed] to opera singer Giulia Grisi.

Mario was born in Cagliari, Sardinia on 17 October 1810 as Giovanni Matteo De Candia; his inherited heraldic titles were Cavaliere (Knight), Nobile (Nobleman) and Don (Sir) in the Kingdom of Sardinia and subsequently the Kingdom of Italy. His aristocratic family belonged to the Savoyard-Sardinian social elite, part of the Kingdom of Sardinia ruled by the House of Savoy. His relatives were members of the Royal Court of Turin, while his father held the rank of general and was aide-de-camp to King Charles Felix of Sardinia (house of Savoy). In order to free himself from the burdensome ancestral traditions which he had inherited, and to mitigate his father's opposition to a member of the high-born De Candia family pursuing a 'lowly' musical career, the budding singer adopted the one-word stage name of "Mario" when he made his debut on 30 November 1838. Sometimes, however, he is referred to in print by the fuller appellation of "Giovanni Mario" and he is also called "Mario de Candia".

Mario's decision to become a professional singer arose from accidental circumstances. He was 12 years old when he moved from Cagliari to Turin, where he studied at the Royal Military Academy. Among his fellow students at the academy was the future Prime Minister of Italy, Camillo Cavour. While serving as a second-lieutenant in the King of Sardinia's Guards in Turin, he got some debt. His father refused to help him and the young man, on 24 November 1836, was expelled from the army. Then he left Piedmont and travelled to Paris. The fugitive nobleman was made to feel welcome in Parisian salons and in the city radical milieu, especially in the salon of principessa Cristina Belgiojoso, where he was appreciated as an amateur tenor.[5] For a time he earned his living by giving fencing and riding lessons. People believed him to be a count or a marquis and he never made clear to be only "cavaliere".

Because he possessed an exceptionally fine natural voice, Mario was encouraged by the composer Giacomo Meyerbeer to become a singer. He took singing lessons from two teachers, a Frenchman named Ponchard and the former Italian tenor Marco Bordogni, and proved so gifted that he was swiftly offered an engagement with the Opéra. The young tenor made his debut there on 30 November 1838 as the hero of Meyerbeer's Robert le diable. Meyerbeer had provided a new recitative and aria for him in the second act (the "Mario-Aria"). Mario's performance generated great excitement, and "a new star was born".

Despite scoring an immediate success, owing to the splendid quality of his singing and a dashing stage presence, he did not choose to stay long at the Paris Opéra. In 1839 he was first heard in London, achieving instant success in Donizetti's Lucrezia Borgia, where he met the famous Italian soprano Giulia Grisi. Then he joined the Théâtre Italien, where such illustrious singers as Maria Malibran, Henriette Sontag, Fanny Tacchinardi Persiani, Giulia Grisi, Giovanni Battista Rubini, Antonio Tamburini, and Luigi Lablache regularly performed. His first appearance there was as Nemorino in Donizetti's L'elisir d'amore.

From 1841 Mario and Grisi lived together. The acclaim that Mario received in Italian opera surpassed even that which he had won in French opera, and he soon acquired a Europe-wide reputation for the beauty of his singing and the elegance of his bearing. He possessed a handsome face and a lithe figure (he liked to show off his legs in tights), and his lyrical voice, though less dazzling than that of the older, virtuoso tenor Giovanni Battista Rubini nor so powerful as that of his younger rival Enrico Tamberlik, was described as having a gracefulness and a beguiling, velvety softness that made it unique.[citation needed] The music critic and playwright George Bernard Shaw, who was born in 1856 and therefore could not have heard Mario in his prime, said his singing featured a marked vibrato.

Mario created few operatic parts, the most notable being that of Ernesto in Donizetti's Don Pasquale (1843). However, he sang in the première of Rossini's Stabat Mater and Verdi wrote a new cabaletta for him to sing in the main tenor aria in I due Foscari for a production in Paris. In established roles, Mario's very greatest performances were as the title character in Rossini's Otello of the same name, Gennaro in Lucrezia Borgia, Almaviva in Il Barbiere di Siviglia, Fernando in La favorite, the Duke in Rigoletto, Alfredo in La traviata, Manrico in Il trovatore, Lionel in Martha and many others. The Royal Opera House, Covent Garden in London and the Théâtre Italien in Paris were the scenes of most of his stage triumphs. He sang in London from 1847 until 1867 and again during 1871.

Mario also made occasional appearances elsewhere in England in oratorio, for example at the Birmingham Festival of 1849 and at the Hereford Festival of 1855. Also, he undertook a string of concert tours around the United Kingdom. In about 1849 he acquired the "Villa Salviati" in Florence. At his salon there he received many distinguished cultural figures and members of the European nobility.

In 1854 he toured America with Giulia Grisi, earning much money and much adulation during their trans-Atlantic jaunt. Mario could never marry Grisi, because she was married although separated, from Gérard de Melcy and divorce was not permitted. Before meeting Mario, Grisi had also had a son, whose father was Lord Frederick Castlereagh, a nephew of the famous Robert Castlereagh. The child was acknowledged by Castlereagh with the name Frederick Ormsby. Mario and Grisi had six daughters. One of these was Cecilia Maria De Candia, who married an Englishman, Sir Godfrey Roberts Pearse, and left an account of her parents' careers. During a trip to Saint Petersburg in 1869 Mario's loving wife[citation needed] Giulia Grisi died in Berlin, after which he went on to sing at the St. Petersburg theatre. During this time his daughters were put under the care of tutors assigned by their godmother, the Grand Duchess Maria Nikolaievna, Duchess of Leuchtenberg and president of the Imperial Academy of Arts in St. Petersburg.

Mario bade farewell to the stage at Covent Garden in 1871, but his last performances were concerts in a USA tour with Carlotta Patti in 1872-73.
He spent his last years in Rome, where he was a friend of Prince Odescalchi, but he was in some financial difficulties which now beset him owing to his habitual extravagance. It is said that he used to smoke cigars continually, even when taking a bath. A benefit concert was mounted for Mario in London in 1878 and collections reached £4,000, that provided a pension for the old singer. He died in Rome in 1883 and was buried in his town Cagliari in 1884.

In 1847 Mario bought a house in Sardinia for his mother where she and his brother Carlo lived. It is situated in Cagliari Old Town (Castello), in Contrada S. Caterina 1 (now via Canelles). This house is now a part of a nuns' convent. His brother Carlo's family lived in another house in the vicinity, located at the bottom of Via dei Genovesi, where until the 16th century stood the Pisan town-walls between the Elephant and the Lion Towers. The façade was possibly designed in neoclassical style by the architect Gaetano Cima, or maybe by Carlo De Candia himself, who had studied architecture in Turin together with Cima. On the first floor there are halls with some frescoes and a terrace with scenic views of the gulf of Cagliari.

Born Heinrich Salem Lehmann in Kiel, in the Duchy of Holstein, he received his first art tuition from his father Leo Lehmann (1782–1859) and from other painters in Hamburg. In 1831, at the age of 17, he travelled to Paris to study art under Jean Auguste Dominique Ingres, becoming one of his most accomplished pupils and a close associate for many years. His first exhibition was at the Salon in 1835 where he won a second-class medal. Thereafter he exhibited regularly at the Salon, winning first-class medals in 1840, 1848 and 1855. Lehmann lived in Rome from 1838–41, where he continued his artistic education with Ingres (who was by then Director of the Académie de France there), and collaborated with him on some works—including Ingres' painting Luigi Cherubini and the Muse of Lyric Poetry. In Rome Lehmann befriended Franz Liszt and his lover, the author Marie d'Agoult, corresponding with them for many years and painting portraits of them.

Lehmann settled permanently in Paris in 1842. He was awarded many commissions for large-scale public works, such as at the Hôtel de Ville, the Church of Ste-Clothilde, the Palais du Luxembourg, the Palais de Justice, and the Chapel of the Jeunes Aveugles in the Church of Saint-Merri on Rue Saint-Martin. He went on to paint portraits of many well-known and distinguished people of the day including Charles Gounod, Victor Cousin, Liszt, Chopin, Stendhal, the Princess Christina Belgiojoso and many others.

In 1846 Lehmann received the Légion d'honneur and in 1847 became a French citizen, opening his studio in that same year. In 1861 he became a teacher at the famous École des Beaux-Arts and was appointed Professor in 1875. He founded the Lehmann Prize to recognise academic excellence in art. In 1864 he was elected a member of the Institut de France.

He died in Paris in 1882. His brother Rudolf Lehmann was also a well-known portrait artist.

Pupils of Lehmann are as follows :

Lehmann was a painter of portraits, religious, genre, historical, allegorical and literary works. He drew inspiration from classical mythology, Shakespeare and contemporary writers. Sometimes considered dry and academic, the best of his work can be both pure in line and graceful in form. Among the best of his canvases are:

Jephtha's Daughter (1836)
Grief of the Oceanides (1850)
Prometheus
Erigone's Dream
Venus Anadyomene
Adoration of Magi and Shepherds (1855, Rheims Museum)
Marriage of Tobias (1866)
Mural paintings include those in the chapels of the church of St. Merry, on the ceiling of the Great Hall in the Palais de Justice, and in the Throne Hall, Luxembourg Palace. He painted many well-characterized portraits of celebrated contemporaries—Liszt, Ingres, Marie d'Agoult, Chopin, and Edmond About amongst others. He painted a portrait of himself for the Uffizi Gallery, Florence.