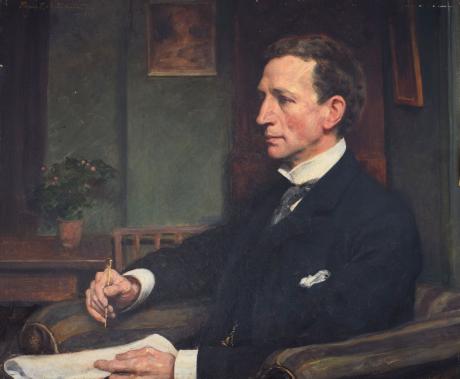 By Descent from the Family

Benson, Godfrey Rathbone, first Baron Charnwood (1864–1945), politician and writer, was born at Langtons, Alresford, Hampshire, on 6 November 1864, the fourth son of the six children of William Benson (1816–1887), barrister, and his wife, Elizabeth Soulsby (d. 1892), daughter of Thomas Smith, of Colebrooke Park, Tonbridge. The actor–manager Sir Francis Robert (Frank) Benson and the designer William Arthur Smith Benson were his brothers. Benson was educated at Winchester College and Balliol College, Oxford. He obtained a first class in literae humaniores (1887) and was appointed lecturer in philosophy at Balliol. He worked in close association with R. L. Nettleship, the second volume of whose Philosophical Lectures and Remains (containing the well-known lectures on the Republic of Plato) he edited in 1897. In 1892 Benson was elected as the Liberal member for the Woodstock division of Oxfordshire, but held the seat only until the next election in 1895. He unsuccessfully stood for St Pancras West in 1900 and Worcestershire West in 1906. He was called to the bar by the Inner Temple in 1898. On 11 May 1897 he married Dorothea Mary Roby (1876–1942), daughter of Roby Thorpe of Nottingham, and granddaughter of A. J. Mundella. The marriage brought Benson significant wealth and political connections. They had two sons, the younger of whom died in infancy, and two daughters. As The Times noted, as a member Benson ‘never took strongly to life in the House of Commons. The House of Lords probably suited his temperament better’ (5 Feb 1945, 6) and he was elevated in June 1911 as Baron Charnwood of Castle Donington, Leicestershire. He was initially a strong supporter of home rule and later of imperial federation and national service. He ‘was happier perhaps when dealing with questions outside the range of party politics, in supporting Lord Cromer and Lord Curzon in their opposition to woman suffrage’ (ibid.). He did much social, charitable, and municipal work, serving as chairman of the council of the Charity Organization Society, president of the National Institute for the Deaf, chairman of quarter sessions, a deputy lieutenant for Staffordshire, and mayor of Lichfield. Benson's deepest interests were religious and intellectual, and, partly through his friendship with Randall Davidson and H. M. Burge, he was closely associated with various causes connected with the Church of England. In 1930 he edited a volume of Burge's Discourses and Letters. His own personal views on religion were set out in a very candid study of St John's gospel, According to St. John (1926), and, in revised form, in A Personal Conviction (1928). His biography of Abraham Lincoln (1916) was widely praised for its ‘originality … keen analysis and literary facility’ (Thomas, 209–10) and it changed the historical approach to Lincoln's life, with an emphasis on interpretation of the acts of his administration rather than idolatry. He also published Theodore Roosevelt (1923). Benson died at his home, 5 Cadogan Court, Draycott Avenue, London, on 3 February 1945, and was buried at Kingston, near Lewes, Sussex, on 7 February. He was succeeded by his son, John Roby (1901–1955), who, as an ophthalmic surgeon, did valuable research in space perception. Benson's elder daughter, Antonia, married as her second husband Sir Cyril John Radcliffe, and the other, (Eleanor) Theodora Roby Benson, became a novelist and writer of books on travel. Humphrey Sumner, rev. Marc Brodie Frank Samuel Eastman he painted mainly portraiture and landscapes. Eastman was born in London and studied in Croydon School of art and the Royal Academy Schools. His artwork has been exhibited at the Royal Academy of Arts.

Frank Samuel Eastman he painted mainly portraiture and landscapes. Eastman was born in London and studied in Croydon School of art and the Royal Academy Schools. His artwork has been exhibited at the Royal Academy of Arts.