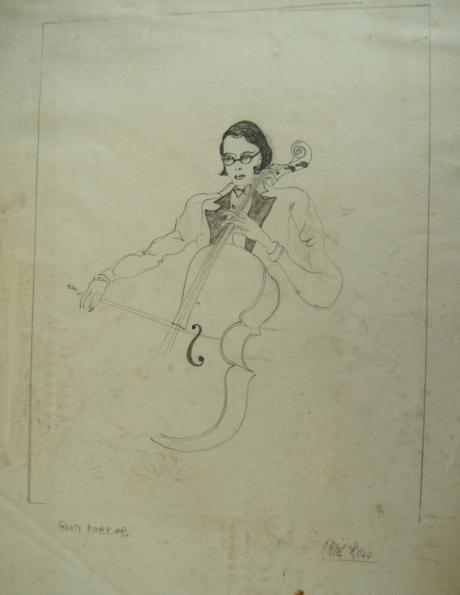 'Miss Gwen Farrar is the daughter of Sir George Farrar, Bart., and became an established favourite immediately after the Great War in her partnership with Miss Norah Blaney. A very talented Actress, Vocalist and Instrumentalist, she delights in making weird noises with her voice much to the discomfort of her partner. She has deserted the Music Halls several times for Revues but always to return to her “first love.”’
(halftone cigarette card of Gwen Farrar, published in England during the mid/late 1920s by R. & J. Hill Ltd as no.23 in its 'Music Hall Celebrities Past & Present,’ first series)

Norah Blaney and Gwen Farrar first performed together at various concerts and entertainments for the benefit of troops in France and Belgium towards the end of the First World War. 'Miss Blaney played the piano and sang in a pretty, light voice, while her partner sang in deep, almost lugubrious, tones, played her 'cello - quite seriously at moments - and made a most amusing play with it. A tallish woman, with a rather long, pale face with straight, bobbed black hair which divided into two angular locks on each side of her forehead, Gwen Farrar had an element of the clown in her which was emphasized by her broad, white collar and black pierrot costume. Her sudden changes of voice and unexpected movements, as when she brusquely took herself off the stage dragging her 'cello along behind her or slinging it across her shoulder, were extremely entertaining. There was an acidity about her which, contrasted with the more conventional sweetness of her companion, showed that their turn belong to the sophistication of the [nineteen-]twenties rather than to the old world of the music-halls which it invaded.’

Gwen Farrar was one of the six daughters of Sir George Farrar, a prominent figure in South African mining and politics. Born on 14 July 1899, her education was undertaken in England where she eventually trained as a cellist. At his death her father left her a comfortable fortune which, together with earnings from her own successful stage career as a 'noted feminine grotesque,’ allowed her to live in some style. She spent much of her spare time at a beautiful seventeenth century mansion she owned in Northamptonshire, while in London her base was a house at 217 King’s Road, Chelsea, 'where she will be remembered as a hostess, sympathetic companion and unchanging friend.’ Gwen Farrar mixed with women of Radclyffe Hall’s set, and she was romantically linked at one time with the actress Tallulah Bankhead. Her recreations were tennis, motoring and riding, and as an expert horsewoman she won more than thirty prize cups at various horse shows.

About 1920 Norah Blaney and Gwen Farrar formed their partnership ’“about a piano,” an act with [Blaney] as pianist, the amusingly nonchalant Farrar as cellist, and a constant flow of repartee.’ Over a period of four years from about 1921 to 1924 they appeared at leading London and provincial variety theatres, as well as in the cabaret show Pot Luck! (24 December 1921), for which the above photograph was taken, starring Jack Hulbert and Beatrice Lillie; and the revues Rats (21 February 1923), starring Alfred Lester and Gertrude Lawrence; and Yes! (29 September 1923), starring A.W. Bascomb, Norah Blaney and Gwen Farrar, all of which were presented by André Charlot at the Vaudeville Theatre, Strand, London. On 21 May 1924 they opened in another Charlot revue, The Punch Bowl, at the Duke of York’s Theatre, London, with Alfred Lester, Billy Leonard, Sonnie Hale, Ralph Coram, Hermione Baddeley and Marjorie Spiers.

Blaney and Farrar were back together again from September 1925 in a series of variety theatre appearances. The following year they went to New York to join the cast of the long-running Louis the 14th (Cosmopolitan Theatre, 3 March 1925) starring Leon Errol, and then appeared in Palm Beach Nights. The pair then returned to London to go their separate professional ways, Blaney to play Huguette du Hamel in Rudolf Friml’s musical play The Vagabond King (Winter Garden Theatre, London, 19 April 1927) with husband and wife Derek Oldham and Winnie Melville; and Farrar to appear in the revue White Birds (His Majesty’s Theatre, London, 31 May 1927), starring Maurice Chevalier, Anton Dolin, Billy Mayerl, José Collins and Maisie Gay. She began a short professional partnership at this time with the popular pianist Billy Mayerl. Thereafter Norah Blaney’s work included various tours in musical comedies, and pantomimes; and Gwen Farrar’s in such pieces as Wonder Bar (Savoy Theatre, London, 5 December 1930), a 'musical play of night life,’ and the ill-fated revue After Dinner (Gaiety Theatre, London, 3 November 1932) which ran for only fifteen performances. However, Blaney and Farrar were together again in The House that Jack Built (originally produced at the Adelphi Theatre, London, 8 November 1929) with Jack Hulbert and Cicely Courtneidge upon its transferral to the Winter Garden on 14 April 1930. Their farewell appearance was at the London Palladium in February 1932.

In addition to her continued presence in the theatre, Gwen Farrar appeared in three British films: She Shall Have Music (1935), with Jack Hylton; Beloved Imposter (1936), which featured the popular pianist Leslie Hutchinson; and Take a Chance (1937), with Binnie Hale, Claude Hulbert and Harry Tate. Miss Farrar’s health is said never to have been robust and she died after a short illness on Christmas day, 1944.