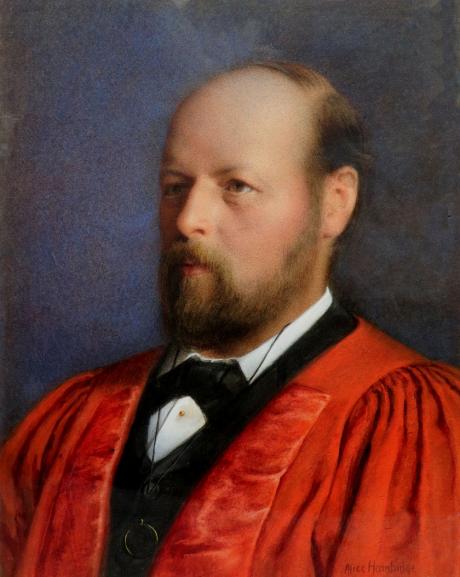 Hallam Tennyson,  second Baron Tennyson (1852–1928), biographer and governor-general of Australia, was born on 11 August 1852 at Twickenham, Middlesex, eldest son of the poet laureate, Alfred Tennyson, first Baron Tennyson (1809–1892), and his wife, Emily Sarah, néeSellwood (1813–1896). The Tennysons were a close family and, as boys, Hallam and his brother Lionel were doted upon by their middle-aged parents. Emily Tennyson was reluctant to let either son leave her care for formal schooling. The boys were often dressed in identical tunics with lace fineries, scarlet stockings, and strapped slippers. Charles Dodgson photographed them in 1857, remarking that they were the most beautiful boys he had ever seen. Alfred, Lord Tennyson described his eldest son as a ‘noble child’ (Martin, 378). Educated at home by his mother and a series of tutors, Hallam then briefly attended a preparatory school at Bailey Gate in Dorset run by Charles Kegan Paul, a former chaplain at Eton who thought the boy ‘accurate’ rather than brilliant at his studies (ibid.). From 1866 to 1872 he attended Marlborough College from  1866 to 1872 and boarded at Preshute House.  Hallam came to Marlborough during the reign of the third Master, George Granville Bradley, who was a friend of Alfred Tennyson.  The school history records that ‘When Tennyson sent his son Hallam to boarding-school he explained that ‘I sent him to Marlborough because Bradley was a friend of mine, and [Dean] Stanley has told me that it is the best school in England’.  In January 1866 Tennyson himself brought Hallam to Marlborough, stayed four days with Bradley at the Master’s Lodge and gave poetry readings to the masters and the Upper Sixth.

Hallam, who became unpoetically portly in later life, was remembered by his contemporary, Henry Simpkinson, as slim, sallow and long-legged, a good sprinter.  But his school fellows considered that a poem which won second prize for School English Verse would not have done so if his name had not been Tennyson.   A set of English hexameters which he published in The Marlburian and signed T, were parodied by another boy who signed himself ‘Coffee.  Hallam’s hexameters were in fact part composed by the Poet Laureate.)  But the boys agreed that he deserved the Colbeck Reading Prize.  ‘Tennyson chose the scene in Henry IV, where Falstaff describes how he was set upon by countless men in  buckram.  He gave it magnificently, and was unanimously adjudged the winner.’ – Thomas Hinde, Paths of Progress: A History of Marlborough College . Alfred Tennyson stayed at the Master’s Lodge regularly while his son was a pupil and, apparently, was fond of musing beneath the copper beeches near the river at the bottom of the Lodge garden.  These trees, the last of which survived until a couple of years ago, became known as the ‘Tennyson beeches’.

Hallam  matriculated at Trinity College, Cambridge in 1872. In 1877 he was admitted to the Inner Temple. Hallam Tennyson occupied a particularly important place in his father's life. He travelled with him around Europe taking nineteen summer tours between 1874 and 1892, and was closely involved in all his father's literary affairs, acting as secretary, confidant, occasional amanuensis, and warden of the poet's privacy. Hallam Tennyson's own literary aspirations were modest; he produced some prize-winning poetry at Marlborough, contributed articles to magazines, published an edition of Jack and the Beanstalk, illustrated by Randolph Caldecott, and edited two poetry collections.

Tennyson was summoned home to assist after his mother's breakdown in health in 1874, and devoted himself to his family thereafter. He became a councillor of the Imperial Federation League in 1883 and through this activity both embraced his father's strong interests in strengthening empire ties and extended his own reputation in government circles.

In 1883 Hallam Tennyson became engaged to Audrey Georgina Florence Boyle (1853/4–1916), and they were married at Westminster Abbey on 25 June 1884. Audrey, daughter of the diplomat Charles Boyle and his wife, Zacyntha, was the only daughter in a family of six sons. She joined the close-knit Tennyson family and accepted her husband's filial occupations without demur, although she often found her position difficult. The couple lived at Farringford and were constantly ‘on call’ to the poet and his wife. Their first son, Lionel Hallam, was born in 1889 after five years of marriage, followed by (Alfred) Aubrey (1891–1918), and Harold Courtenay (1896–1916).

Tennyson continued to act as his father's efficient private secretary until the latter's death in 1892. Succeeding as second baron, Tennyson then began immediately on his father's biography. With his father's friends Henry Sidgwick and Francis Palgrave, he sorted over 40,000 letters. At the poet's direction, more than three-quarters of his letters were destroyed under the supervision of Lady Tennyson. The resulting two-volume biography, Alfred Lord Tennyson: a Memoir by his Son (1897), is a conscientious work of guarded commemoration. Hallam Tennyson was tall, fair, bearded, well-proportioned in youth, with dark eyes and a good speaking voice. Contemporaries regarded him as highly conventional, careful, systematic, and devoted beyond the call of duty. His fidelity was motivated by open admiration of a man whom he saw as embodying the very best in his countrymen. On his deathbed, Lord Tennyson expressed regret at making a ‘slave’ of his son (H. Tennyson, 775).

Hallam Tennyson continued working from Farringford, serving as a magistrate, and on the councils of Marlborough College and the Gordon Boys' Home. In 1896, after his mother's death and freed from filial duties, he actively sought selection for service in the empire. Joseph Chamberlain invited him to consider the position of governor of South Australia in mid-1898. After initial hesitation Tennyson accepted the post in January 1899, arriving with his family in Adelaide in April that year.

The new governor's lack of experience was soon offset in colonial minds by his lack of ostentation, which was applauded, although gubernatorial remunerations remained an issue. Tennyson complained frequently about the costs of official entertaining and maintaining his establishment. His diligence, however, was noted and his family was fêted; Lady Tennyson and her young sons were regarded with affection.

Tennyson defended state governors' rights to deal directly with the British government. He promoted the dispatch of the HMCS Protector to China during the Boxer uprising of 1899–1900. With his British patriotism aroused by the South African War (1899–1902), he marched with the volunteer South Australian contingent in October 1899, bidding them farewell on the troopship Medic. While state governor, he designed the South Australian seal and flag and endowed a Tennyson medal for students. He was awarded an honorary LLD degree from Melbourne and Adelaide universities, and the honorary colonelcy of the 7th Victorian light horse and the South Australian artillery.

In July 1902, following Lord Hopetoun's unanticipated resignation, Lord Tennyson became Australia's acting governor-general and then, from January 1903 to January 1904, a period he designated, governor-general. He was created GCMG on 25 June 1903.

As governor-general Tennyson adopted a unifying position in Australia, although his personal enthusiasm for imperial federation occasionally blinded him to Australia's own priorities. A later commentator remarked that ‘Tennyson's tour of duty [saw] the consolidation of the office of governor-general as an institutional framework which assisted in maintaining the Imperial connection’ (Cunneen, 43).

Lord Tennyson and his family returned to England in 1904, taking up residence again at Farringford. He refused the governorship of Madras, preferring to remain with his sons in England, although he retained an active interest in empire settlement schemes. He was made a privy councillor in 1905, and received honours from the universities of Oxford and Cambridge. In 1907 and 1908 he edited and published nine volumes of his father's poetry and in 1911 produced another memoir, Tennyson and his Friends. His leisure pursuits included yachting, geology, and playing golf. After 1913 he served as deputy governor of the Isle of Wight.

Tragedy struck in 1916, when Harold, Tennyson's youngest son, was killed in action and his wife, Audrey, aged sixty-two, died from pneumonia. In March 1918 Aubrey, Tennyson's middle son, was also killed in action. Lionel Tennyson was wounded three times but survived. On 27 July 1918 Lord Tennyson was married by special licence at the parish church of South Stoneham, in Hampshire; his second wife was Mary Emily Hickens (b. 1855), a widow, daughter of Charles Prinsep, former advocate-general of Bengal.

South Australian painter, known especially for her watercolours and pastel portraits of public figures and children. Alice's watercolour miniatures on ivory were in great demand from about 1905 to 1913.  painter, was born on 2 October 1869, at Bridge Street, Kensington, South Australia, evidently in the house built by her father and grandfather John in 1850, a landmark in the district (now demolished).