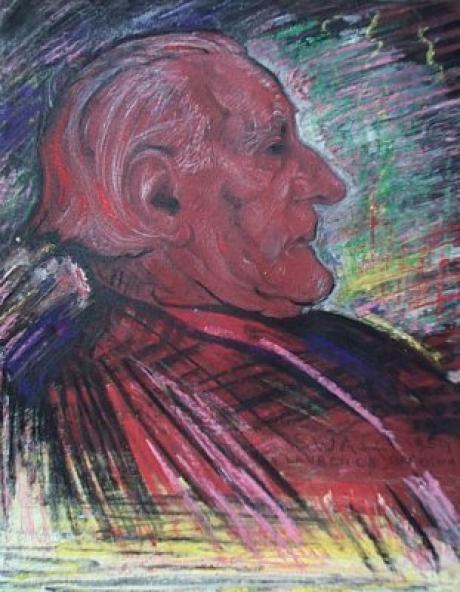 Signed, inscribed and dated: and inscribed on the reverse 'To Swaffer on his 80th Birthday, from Laurence Bradshaw.'

Swaffer, Hannen (1879–1962), journalist, was born at Lindfield, Sussex, on 1 November 1879, the eldest of eight children, four boys and four girls, of a Folkestone draper, Henry Joseph Swaffer, and his wife, Kate Eugenie Hannen. He went to Stroud Green grammar school, Kent, and later, as he said, continued his education in Fleet Street. First he was appointed a reporter at Folkestone at 5s. a week. An often scornful critic, at the age of eighteen he was banned from the local theatre. A time came when he boasted of having been banned from twelve of forty-one theatres in the West End of London. He joined the Daily Mail in 1902 and worked for the future Lord Northcliffe for ten years. His employer, who because of his appearance liked to call Swaffer the Poet, made him editor for a while of the Weekly Dispatch. Swaffer's best work in his Northcliffe years helped to transform the Daily Mirror, after an unhappy start as a women's journal, into a mass-circulation picture paper.

In 1913 Swaffer, seeking fresh employment, invented ‘Mr. Gossip’ for the Daily Sketch as a new and bold kind of gossip feature. He then moved to the Daily Graphic, where he won even more praise for a gossip page signed ‘Mr. London’. After contributing ‘Plays and players’ to the Sunday Times and being for a few months in 1924 editor of The People, he became in 1926 drama critic of the Daily Express. In this post he enjoyed full scope for his pungent candour. He campaigned against what he considered the over-Americanization of the stage and the press, and was smacked in the face by an American actress at the Savoy Hotel ‘on behalf of America’. Affronts because of his critical trenchancy never perturbed this sharpest of critics. Someone slashed a portrait of him intended for the United States. Swaff, as he was now generally known, said: ‘I heartily approve. I often feel like slashing my own face when I look in the mirror.’

Another phase of Swaffer's life opened in 1931 when he joined the Daily Herald. In this and other Odhams publications he not only exploited his wide acquaintance with the famous and the notorious but also championed many a cause. One was socialism, to which Merrie England, by Robert Blatchford, had won him over. He often wrote wisely, sometimes like a wiseacre, and always in a clear, homely style. His habit of pontificating on many subjects led him to be termed, to his deep satisfaction, the Pope of Fleet Street. He did not look the part, his appearance suggesting an actor of Sir Henry Irving's day: he wore a wide-brimmed black felt hat, black stock, high collar, dark flowing locks, and a melancholy expression. A kind and witty man, he was known by close friends to be shy under his mask of defiant self-confidence. In middle life he became a spiritualist, regularly attended séances, and was appointed honorary president of the Spiritualists' National Union, thus becoming titular head of the 500 churches devoted to his faith.

In his prime Swaffer was said to write nearly a million words a year. He was described at a gathering in his honour as the greatest reporter of the era and an immortal of his own time. Speaking in 1959 of his old employers he said: ‘I know more about it than any of them. I had to fight the whole lot of them.’ Earlier he had denounced a ‘new kind of feudalism’ among press magnates.

Swaffer resigned from the Labour Party in 1957 after a dispute arising out of a campaign to improve mental hospitals. Articles he and others wrote were said to use ‘sick and helpless people to attract readers’, a charge Swaffer deeply resented.

Swaffer married in 1904 Helen Hannah (d. 1956), daughter of John Sitton, a grocer living in Clapham; there were no children. Swaffer lived for many years in a flat overlooking Trafalgar Square in order, he said, to have a front seat when the revolution came. He died in University College Hospital, London, on 16 January 1962. In the week of his death he wrote, as usual, a commentary on current journalism for the World's Press News. The Hannen Swaffer journalistic awards announced every year are a memorial to a picturesque personality, who not only enlivened the popular journalism of his time but set an example of often candid gossip which continued to be followed.

Laurence Bradshaw (1899-1978) was an English sculptor, printmaker and artist. Bradshaw had been a socialist since his youth and had joined the Communist Party of Great Britain in the early 1930s.

Bradshaw joined the artist Frank Brangwyn as his assistant in the 1920s, Brangwyn himself had been an assistant to the socialist polymath William Morris. Bradshaw designed several posters for London Transport from 1935 to 1937.

In 1955 Bradshaw won the commission to design the monument to Karl Marx at his burial place in Highgate Cemetery. Bradshaw designed the whole of Marx's monument including the plinth and the calligraphy of the texts on the monument, but did not sign the finished work. Bradshaw considered that his design must be "...not a monument to a man only but to a great mind and a great philosopher."The tomb was designated a Grade I listed monument in 1974.