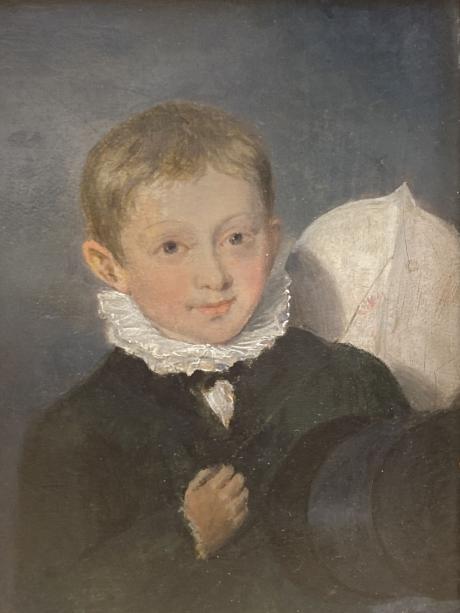 inscribed on the reverse " Henry Ricketts "

Henry Ricketts was a Bristol glass-maker who devised an innovative bottle-mould in 1821. His three-part mould enabled bottles to be blown to exactly the same size and capacity every time. It revolutionised production and energised the local industry. Ricketts set up his own bottle-making company which continued until 1923.

The Ricketts family was involved in the glass business for almost a century, beginning in 1789, when Jacob Ricketts and his brother, Richard, operated the Phoenix Glass Works at Temple Gate, Bristol, England. After a few changes, the firm became Henry Ricketts & Co., probably to celebrate the invention of a mechanical mold system that used three-piece mold and had a “washer” baseplate allowing embossing on the bases – by Jacob’s son, Henry, although son, Richard (not to be confused with his uncle, Richard, Jacob’s brother), took over the business, soon partnering with William Powell, who continued to run the operation after Richard’s death in 1856 – producing Codd-stoppered bottles until 1923.

Although they were deeply involved in the tobacco trade (a subject not relevant to this research area), the Ricketts family glass holdings began and remained in Bristol, England, centered during the entire period on three glass houses along Cheese Lane (later Avon St.). The firm expanded several times, eventually becoming the only glass house in Bristol. As is often the case in glass history, several researchers from 1876 to 2015 have presented confused (and confusing) portrayals of the relationships between these plants, none with a full understanding of the early conditions – which set the stage for all the subsequent changes – until the most recent study by Gregory et al. (2019). Phoenix Glass Works, Bristol, England (1785-1811) A group of local businessmen, composed primarily of soap manufacturers, built the first glass house along Cheese Lane ca. 1715 to produce bottles – frequently called the Soap Boilers’ glass factory. A few years later, the same group constructed a second, nearby plant to create crown window glass – a second Soap Boilers’ plant. Robert Hixon assembled another group of businessmen, including hoop-makers, merchants, and other investors, to open a third plant – another bottle house – often known as the Hoopers glass house – in 1720 (Gregory et al. 2019:5). This set the stage for local glass production. 237 Gregory et al. (2019:5) reported that the partners involved in the ownership of the three factories changed repeatedly during the 18th century, although he provided no details. At some point, the crown window glass factory evolved into a flint (colorless) plant, producing tableware. This became the Phoenix Glass Works. A merger of the Redcliff Backs [only about a mile west of the Phoenix; only mentioned by this source] and the Phoenix Glass Works was completed in 1802 to become Ricketts, Evans and the Ricketts Glass Company.

Henry Ricketts replaced Richard Ricketts as a partner, Richard, brother of Jacob and father of Henry’s wife, Elizabeth, having retired in 1801. Henry’s wife was also his cousin. Jacob presented Henry with £500 when he married Elizabeth in 1805 as well as £1,000 as Henry became a partner in the business (Burton 2015:191). The firm became Henry Ricketts & Co. in 1811. 238 Henry Ricketts & Co., Bristol, England (ca. 1811-1851) The partnership reorganized as Henry Ricketts & Co. in 1811, with Jacob W. Ricketts, his son Henry Ricketts, David Evans and John Cave as partners, also acquiring a lease on “the Soapboilers’ Glass-house on Avon Street, formerly Cheese Lane,” St. Philips, at the same time (Burton 2015:191). The Soapboilers’ Glass-house” referred to by Burton was the older unit, producing bottles. Prior to this time, the firms only made tableware at the Phoenix Glass Works. The acquisition of Soapboilers allowed the Ricketts family entry into bottle production – notably beer and wine bottles (Alford 1973:67; Powell 1923:99; von Mechow 2018). Burton (2015:191) added that “Jacob’s share in the Bristol Porter Brewing Company [gave the firm] effective control of the market in glass bottle production.” Although virtually all sources date the bottles embossed “H. Ricketts & Co.” between 1811 and 1851, this was a partnership of four men, with Henry Ricketts as probably the junior member (in both age and financial contribution). Therefore, a reason for the firm name must exist. Connected with this situation, most sources (e.g., Lindsey 2018) dated the first use of the three-piece mold at ca. 1814; however, the 1811 reorganization – using the name Henry Ricketts – must have centered around Henry’s mold invention – even though he did not patent the process until 1821 (see the Patent section below).

The plant continued in operation under the same name – with no apparent alterations or issues – until the next reorganization in 1851. It seems odd that we have found no historical references to the plant for the entire forty-year span of this period. The February 28, 1852, dissolution of Henry Ricketts & Co. in the London Gazette listed the partners as Henry Ricketts, William Cave, Henry Glascodine, and Richard Ricketts. This indicates at least one major restructuring of the operating firm, although we have not found a way to determine whether this was a single reorganization or more. Jacob Ricketts was no longer present, and Henry had probably received Jacob’s share upon his retirement or death, probably the latter. Since Jacob had been a partner in Wadham, Ricketts & Co. in 1789, 63 years earlier, and assuming that he was at least 20 by the time of his first involvement, he would have been 83 or older in 1852 – a very long life for that time period. He was certainly still alive in 1834, when he retired from the tobacco business – and he may have retired from the glass trade at the same time (Alford 1973:70). 239 As John Cave was one of the original partners, William Cave may have been a son who replaced John upon his death or retirement. Glascodine seems to have replaced David Evans, and Richard Ricketts seems to have returned. However, this was not the same Richard Ricketts. Richard, the brother of Jacob had perished in 1818. The Richard Ricketts of the 1852 dissolution was Henry’s younger son, who had joined the firm in 1845.1 Upon the retirement of Henry Ricketts in 1852, all production ceased at the Phoenix Glass Works (Alford 1973:65; Burton 2015:192).

Edward Bird RA (1772 – 1819) was an English genre painter who spent most of his working life in Bristol, where the Bristol School of artists formed around him. He enjoyed a few years of popularity in London, where he challenged the dominance of Sir David Wilkie in the genre painting field, before moving on to history painting, specialising in battle scenes.

Bird was born in Wolverhampton, the son of a carpenter. He received no formal artistic training, but developed his skills through apprenticeship as a japanning artist painting tea trays. In 1794 he moved to Bristol, where he married Martha Dodrell and pursued a career in artistic commissions: portraiture, book illustrations, and church painting.

At Bristol, Bird became the centre of an informal group which included other artists such as Edward Villiers Rippingille and Nathan Cooper Branwhite, and which developed into the Bristol School. Initially amateur artists dominated the group, and Bird's closest friends included the amateurs John King, who was also Bird's doctor, and George Cumberland.Cumberland, who moved to Bristol in 1807, became godfather to Bird's son. He had a large art collection from which he would lend items for Bird to study.

The group conducted evening sketching meetings and sketching excursions to scenic locations around Bristol. Landscape with Cottage was probably painted on one of these trips. However, Bird painted landscapes relatively infrequently and he would often accompany the excursions without joining in the sketching. Bird's greatest influence on the Bristol artists was in the naturalistic style and fresh colours of his genre painting, especially so in the case of Rippingille, who worked closely with him. In 1814 they both exhibited works at the Royal Academy with the same subject, The Cheat Detected. Francis Danby, who moved to Bristol from Ireland in 1813 and was to succeed Bird as a leader of the Bristol School, was also influenced by Bird's genre style.

In 1809, he exhibited at the Royal Academy Good News, a genre portrait of an old soldier. Placed next to Wilkie's The Cut Finger, it attracted attention, and Bird's popularity grew when the Prince Regent bought his The Country Choristers and commissioned Blind Man's Buff. His works also include the Field of Chevy Chase and the Day after the Battle, which was pronounced his masterpiece.

Bird was elected an associate of the Royal Academy in 1812, was appointed historical painter to Princess Charlotte in 1813, and elected a full member in 1815.

Plagued by ill-health for over five years and unable to paint in the last year of his life, Bird died on 2 November 1819. He was buried in Bristol Cathedral. The following year a successful retrospective exhibition of his work was shown at the Bristol Fire Office, for the benefit of his family. His son George later became a midshipman, his equipment paid for by the subscriptions of Bird's friends. His daughter Martha became a Bristol watercolourist, and the younger daughter Harriet a governess.