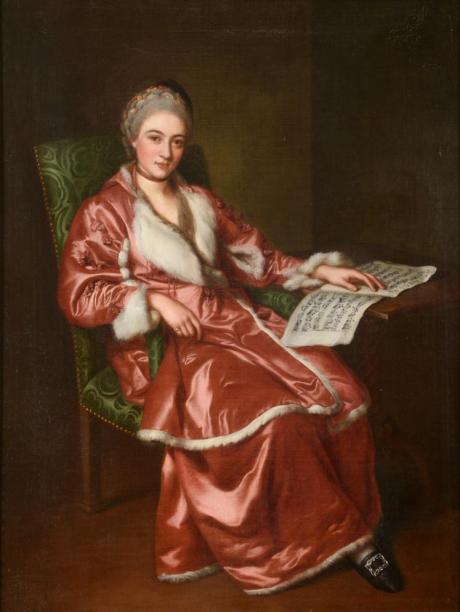 Smaragda (1720–1761), reckoned one of the great beauties of her time, she was the wife of Prince Dmitriy Mikhailovich Golitsyn, marrying him on the 6 November 1751 in St Petersberg, she was also a friend of the empress Elizabeth.

Smaragda was born in St Petersberg , Russia in 1720 and died in Versailles, Yvelines, Île-de-France, France. She was the youngest daughter and forth child of Dimitrie or Demetrius Cantemir 1673–1723 also known by other spellings, who was a Moldavian soldier, statesman, and man of letters. He was twice voivode of Moldavia (March–April 1693 and 1710–1711). During his second term, he allied his state with Russia in their war against Moldavia's Ottoman overlords; Russia's defeat forced Cantemir's family into exile and the replacement of the native voivodes by the Greek phanariots. Cantemir was also a prolific writer, variously a philosopher, historian, composer, musicologist, linguist, ethnographer, and geographer. His son Antioch, Russia's ambassador to Great Britain and France and a friend of Montesquieu and Voltaire, would go on to be known as "the father of Russian poetry". Cantemir was married twice: to Princess Kassandra Cantacuzene (1682–1713), daughter of Prince ?erban Cantacuzino and supposed descendant of the Byzantine Kantakouzenoi, in 1699, and to Princess Anastasia Trubetskaya (1700–1755) in 1717.

Cantemir's children were rather prominent in Russian history. His elder daughter Maria Cantemir (1700–1754) so attracted Peter the Great that he allegedly planned to divorce his wife Catherine to be with her. Upon Catherine's own ascension to the throne, however, Maria was forced to enter a convent. Cantemir's son Antioch (1708–1744) was the Russian ambassador at London and Paris, a friend of Voltaire and Montesquieu, and so influential a poet, satirist, and essayist as to be considered "the father of Russian poetry". Another son Constantin (1703–1747) was implicated in the Golitsyn conspiracy against the empress Anna and was exiled to Siberia.

Smaragda's husband Prince Dmitry Mikhailovich Golitsyn who was born 15 May 1721 in Turku, and died 19 September 1793 in Vienna he was a Russian diplomat from the noble Golitsyn family. From 1761 to 1792 he was Russian ambassador to Austria and France during the reign of Catherine the Great. Primarily remembered for the splendid Golitsyn Hospital he opened in Moscow, he should also be noted as a great friend and patron of Mozart. He was also a well known Eighteenth-century Russian Drawings Collector.

Smaragda was painted by a number of artists including Louis-Michel van Loo.

Dance, Nathaniel [afterwards Sir Nathaniel Holland, baronet] (1735–1811), painter and politician, was born on 18 May 1735 in Chiswell Street, London, the third son of George Dance the elder (c. 1694–1768) and his wife, Elizabeth Gould (d. 1762). His father was clerk of works for the City of London, and his brother George Dance the younger (1741–1825) was also an architect; James Dance (1721–1774), the eldest son, was an actor and writer, and another brother, William Dance (fl. 1780), was a miniature painter. Nathaniel Dance was educated at Merchant Taylors' School, London (his father was a freeman of that company), from 1743 until 1748. From about 1752 he trained as an artist for approximately two years under the painter Francis Hayman, whom he evidently admired; it was during this period that he came to know the young Thomas Gainsborough. He was in Rome from May 1754, but his activities there remain obscure until summer 1758; however, it is possible that he undertook some further training during this time. In winter 1758–9 he visited Leghorn and Florence, where he met his brother George: the two probably shared an apartment in strada Felice, Rome.

Dance devoted much of his time in Italy to developing his powers of invention, drawing, and colouring: he made copies after old masters, remarked on the development of his use of colour, and sought criticism of his work from the most esteemed painters then in Rome, including Gavin Hamilton. However, this careful approach often delayed the completion of his most important works. Two commissioned works begun in 1760, Nisus and Euryalus and Meeting of Aeneas and Achates with Venus (exh. Society of Artists, 1766) made slow progress in his studio; the former was not completed by the time Dance left Rome, while the latter was nearing completion only in 1764, the year of his election to the Accademia di San Luca. It was as a history painter that Dance sought to develop: his first recorded such work, Death of Virginia, its composition based upon that of Raphael's Sacrifice of Lystra, was intended for the Society of Arts exhibition of 1760, and Dance was confident that it would win the £100 premium. However, as it was painted abroad it was excluded, and was exhibited the following year at the Society of Artists.

Dance was also a successful and well-connected portrait painter. He was engaged in some form of partnership with one of the most fashionable portraitists of British visitors to Rome, Pompeo Batoni; a travel card of 1762 introduced 'Rome, Sigr. Pompeo Batoni & Mr Dance, for Portrait and History Painting' (Ingamells, 275). His portraits in Italy included Charles, Lord Hope, James, Later Third Earl of Hopetoun, and their Tutor William Rouet, a conversation piece of 1763 (priv. coll.) and Lord and Lady Spencer(1764), but his reputation as a portrait painter was already established by 1760, when he was commissioned to paint four versions of a conversation piece, one for each of the group of gentlemen depicted in front of the Colosseum: James Grant, John Mytton, Thomas Robinson, and Thomas Wynn (Yale U. CBA). His most prestigious commission came from the royal librarian and keeper of pictures, Richard Dalton, on behalf of George III, to paint a full-length portrait of Edward, duke of York (1764; Royal Collection). However, a painting of more personal significance was the portrait of the artist Angelica Kauffman (priv. coll), whom he 'courted at Rome' (Farington, Diary, 8 Dec 1797).

By June 1766, Dance had returned to London, where he established himself as a fashionable portrait painter at 13 Tavistock Row, Covent Garden. Kauffman arrived in Britain at this date, but their relationship changed and she married the so-called count Frederick de Horn in 1767. Both Dance and Kauffman were foundation members of the Royal Academy [see Founders of the Royal Academy of Arts]. To its inaugural exhibition of 1769 he sent full-length portraits of George III and Queen Charlotte (Uppark, Sussex), as well as likenesses of a bishop and two gentlemen, and his exhibited work until 1772 was dominated by portraiture. In 1773 both he and Gainsborough refused to exhibit at the Royal Academy after a disagreement with the president, Sir Joshua Reynolds: Dance and Gainsborough are the only foundation members not represented in Johann Zoffany's The Academicians of the Royal Academy (1771–2; Royal Collection). However, Dance returned to the academy exhibition in 1774, showing Orpheus Lamenting the Loss of Eurydice, and in 1776, showing The Death of Mark Anthony.

The rococo style of Dance's early works, apparent, for example, in the portrait of George Dance the younger and his sister Hester (c.1753; priv. coll.) and that of the composer and violinist Pietro Nardini and an unknown man (1759; priv. coll.), learned from Hayman, was modified in Italy through the influence of Batoni. Dance criticized his former master's 'colouring and correctness of drawing' (Allen, 59), and it was precisely those elements that apparently altered after his association with Batonibegan. Dance worked in the high keys of grand-manner portraiture and the paint became more translucent in quality; however, it has been observed that his manner of painting was 'as dry and closely textured as before' (Goodreau, Nathaniel Dance, 1735–1811, introduction).

The opportunities for history painting were very limited in eighteenth-century Britain, and although Dance's name was among those chosen for potentially the most important project of the time, the decoration of St Paul's Cathedral, the scheme never came to fruition. His name was also among those listed to decorate the Great Room of the Society of Arts, but this project was realized by James Barry alone. His most public history painting was ephemeral, a transparency depicting an allegory of architecture and displayed on the Royal Academy's building in Pall Mall in 1770 to mark the king's birthday.

At some time in the 1770s Dance became financially independent. Although he stopped exhibiting professionally in 1776 and produced fewer paintings, he was still active professionally and contributed to running the Royal Academy. However, in 1782 he gave up his studio and moved to Cranbury Park, Hampshire—the home of a widow, Mrs Harriet Dummer (d. 1825), daughter of Sir Cecil Bishopp; she had an income of £18,000per annum. They were married in London on 17 July 1783; there were no children.

Dance resigned from the Royal Academy in 1790, the year of his election to parliamentas member for East Grinstead, Sussex, but continued to exhibit there as an amateur in 1792, 1794, and 1800. On each occasion he showed a landscape, a more fitting subject for a gentleman than portraiture. However, the story circulated by the obituarist in the Monthly Magazine (December 1811) that he bought back and then destroyed his work in order to consolidate his position as a gentleman is unfounded, although he did destroy a number of works that remained in his studio with which he was dissatisfied. From about the time of Dance's retirement from professional life he produced a number of political caricatures. War and Neither War nor Peace were etched by James Gillray and published in March 1783, and four volumes of unsigned caricatures and other comic drawings by Nathaniel and his brother George were sold at auction in 1912. The works were dispersed, but many of these pen-and-ink drawings are in the Tate collection.

On 4 July 1800 Dance took, by royal licence, the name Holland, after his wife's cousin Charlotte. He was created a baronet in November in that same year. He served East Grinstead until 1802 and from 1807 until his death; he was MP for Great Bedwyn in Wiltshire from 1802 to 1806. Both seats were gained through family connections and acts of financial generosity. He was generally a supporter of Pitt, but was not an active member of the house; he served on the select committee on the British Museum appointed in June 1805.

Dance was 'considered a singular man in His manner … on the whole very well liked by the neighbouring aristocracy' (Farington, Diary, 2 Nov 1807). According to Farington, he 'always objected to wine … but in company passes the bottle so as to keep up an appearance of drinking some wine' (ibid., 6 June 1807). He was wealthy: by 1794, in addition to savings of £50,000, he had an estate near Dorchester, Oxfordshire, and another in Wiltshire, for which he paid £30,000 and £12,000 respectively. In 1807 he built a house in Piccadilly, London, for his wife. He died, suddenly, at a house where he was a guest, in Kingsgate Street, Winchester, on 15 October 1811, while humorously describing to a party of ladies the 'absurdity' of some monuments recently placed in Winchester Cathedral (ibid., 26 Nov 1811). He was buried in the cathedral. The National Portrait Gallery, London, and Tate collection have a number of his portraits. He is also represented at the Yale Center for British Art, New Haven, Connecticut.