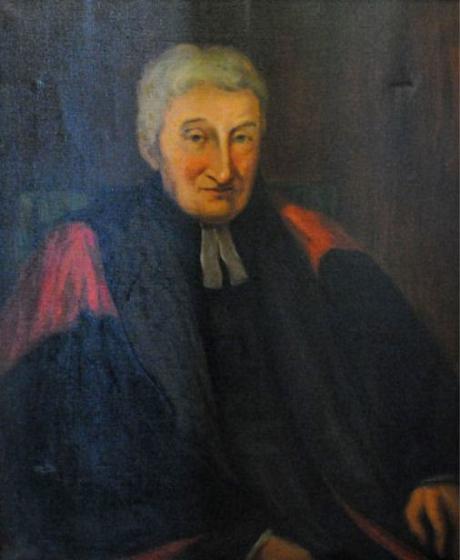 James Burton was son of Francis Burton , he was born in Aynho in Northamptonshire . He started at Magdelen college in 1755 as a chorister. He matriculated as an undergraduate at magdalen college, Oxford on 17th dec 1761, aged 16 whilst still a chorister. (boys at that time often remained choristers until their mid teens since choristerships were used to offer discreet educational support to the deserving poor). He took his BA in 1765 (MA 1768, BD 1788, and DD 1789). In 1762 he was elected Demy of Magdalen, a post which held until he resigned in 1775. He resigned his post because he had married in 1774 : until the mid 19th century fellows of oxford colleges could not retain their fellowship upon marriage, and so it became a custom to give fellows who did marry a year's grace before they left. He was chaplain in ordinary to George III, and a canon of Christ Church Oxford from 1793-30th his death , june 1825, aged 80. James Burton was a Chorister from 1755-1762. He matriculated 17 dec 1761 , aged 16. Son of Francis Burton of Anyhoe, Northampton. Prob F. 1771-1775. BA 5 June, 1765, M.A. 13 April 1768. B.D. 12 July 1788. D.D. 18 July 1789. Vicar of Iffley, nr Oxford, 1779-1789. Coll. Canon of First Stall in Oxford Cathedral, 23 march 1793. Died 30 June 1825. Extract from the Gentleman’s Magazine for July 1825. “ AD. 1825, June 30. Died at his chambers in Christ Church, Oxford, aged 80. The Rev James Burton, D.D, Chaplain in ordinary to King (George III), Canon of Christ Church; rector of over-Worton, co Oxford; Vicar of Little Berkampstead, co Hertford; Incumbent of the first portion of Waddesdon Rectory, Co Buckingham; and for many years a Magistrate for Oxfordshire. “ This venerable and well-known Divine was educated at magdalen College, and eventually became a fellow of that society. He was presented to the Rectory of Over-Worton, with the annexed perpetual curacy of Nether-Worton, by W.Wilson, Esq and T Cartwright, Esq of Anyhoe in 1771; to Birkampstead in 1789 (Dec 9,) by James , Marquis of Salisbury; and to the first portion of Waddesdon in the same year by George, Duke of Marlborough, being inducted April 11; in 1793 he succeeded Dr Hemington as canon of Christ Church. In 1774 he married Mary, daughter of Robert Jenner, D.C.L. and regius Professor of Civil law, by wich lady, whom he survived many years, he had five sons and four daughters, all of whom are dead except two daughters, one of whom is married to the rev. Edward Marshall, M.A. late fellow of oriel College, and incumbent of Iffley, near Oxford; the other is still unmarried. A brother of Dr Burton, who is one of the Judges in the court of the King’s Bench in Ireland, and a sister residing in Oxford, still survive him. His urbane, kind and hospitable disposition rendered him beloved and respected by a large circle of friends. His faculties were unimpaired to the last; and he was remarkable for a most retentive memory, which enabled him to entertain his friends with anecdotes of the wits and eccentric characters of years long past. His remains were deposited on the 7th of July in the family vault of Fetcham, near leatherhead, Surrey.