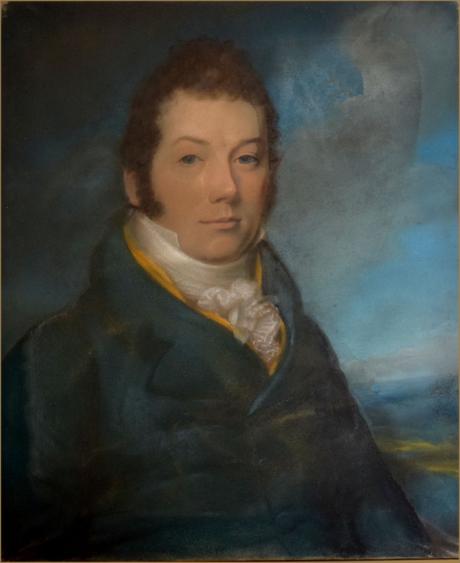 Neil Jeffares suggests that this portrait is likely to be  a later work, from c.1811.

James White, (bap. 1775, d. 1820), author and advertising agent, was baptized on 17 April 1775 in Worcester, the third son of Samuel and Mary White of Bewdley, Worcestershire, and his wife, Mary, née Willes. He was baptised at the Church of St. John in Bedwardine, Worcester, on April 17, 1775. He was Known as Jem White .He spent 'many of the earliest days of his youth' 'in the Neighbourhood' of the Malvern Hills (White, fol. 6). On 19 September 1783 he was admitted to Christ's Hospital on the presentation of Thomas Coventry. At school he seemed something of a dandy: Leigh Hunt recalled 'admiring his handsome appearance, and unimprovable manner of wearing his new clothes' (Hunt, 2.122). White left the school on 30 April 1790, but continued at Christ's Hospital, working as a clerk in the treasurer's office. A friendship with Charles Lamb, begun in their student days, now ripened. By the mid-1790s White was Lamb's 'most familiar friend' (Life and Correspondence of Robert Southey, 6.286).

Lamb introduced White to Shakespeare's Henry IV and White, a natural humorist, developed a powerful imaginative identification with Falstaff. He would 'talk you nothing but pure Falstaff the long evenings through' (Works of Charles and Mary Lamb, 1.229) and occasionally dressed up as Shakespeare's comic hero. He was even known among his friends as Sir John. This fascination with Falstaff culminated in Original Letters, &c. of Sir John Falstaff and his Friends … from Genuine Manuscripts (1796), written with Lamb's assistance. The volume was designed pleasantly to ridicule William Henry Ireland's recent ‘discovery’ (forgery) of Shakespeare's manuscripts, though Lamb later liked to emphasize the purely literary value of the Letters, deriving, he said, 'from the fullness of a young soul, newly kindling at the Shakspearian flame, and bursting to be delivered of a rich exuberance of conceits'. Letters was not a success on its first publication (there were, however, several posthumous editions) and appears to have been White's only attempt at authorship. In 1800 he founded an advertising agency in Warwick Square which moved to 33 Fleet Street about 1808. and became R F White & Son Ltd. This was, arguably, the first such agency to introduce the idea of writing copy for clients' advertisements. Tradition has it that James White was called on to place advertisements for the school and was thus pulled into the world of newspapers and advertising which had long centered around the taverns of Fleet street. Before long White found himself handling advertsing for other people, he was able to operate this from his house which was next door to the school whilst continuing to work as a clerk in the treasurer's ofice.

White had romantic ideas about the feasting practised in ‘Old’ England and took over Elizabeth Montagu's role as patron of May day feasts for London's chimney sweepers. He served sausages instead of beef and pudding, acting as head waiter himself: Lamb gives an unforgettable account of these occasions in his essay 'The praise of chimney-sweepers'. White married Margaret Faulder (1792–1864), daughter of Robert Faulder, a bookseller, in 1811, and they had six children. He died at his house in Burton Crescent, London, on 13 March 1820, leaving a sizeable fortune, and was buried in Paddington churchyard. Friends remembered him as a man of unmatched good humour and drollness. In 1822 Lamb wrote: 'He [White] carried away with him half the fun of the world when he died—of my world at least' (Works of Charles and Mary Lamb, 2.130). After his death, his business seems to have been initially managed by his wife, and was later taken over by his son Robert Faulder White. White's advertising agency, subsequently R. F. White & Son Ltd, remained in the hands of his family until the death of his great-grandson, Gilbert White, in 1962.

R. F. White & Son Ltd, was established in Warwick Square EC1 in 1800, and moved to 33 Fleet Street in 1808, where it remained until it moved to 72 Fleet Street in 1928. In 1822 James White's widow (Nee Margaret Faulder) married Richard Barker who became involved in managing the agency. James White's son, Robert Faulder White 1815-1856, grandson Arthur Robert White (1854-1922), and great grandson, Gilbert White (1883-1963) continued to run the agency as a family business. In 1919 Arthur Robert White, Gilbert White and Thomas Fredrick Clarke formed a partnership. In 1929 a Limited Company was formed , with Gilbert White and T F Clarke as first directors. In 1958 R F White and Son Ltd became affiliated with A A Black Ltd.

Smith's earliest mezzotint, Pascal Paoli (1769), after Henry Benbridge (priv. coll.), launched a forty-year career during which he produced at least 400 mezzotints and stipple engravings, most of them (about 279) reproductive. Having established his reputation with Mr Banks, after a portrait by Benjamin West (exh. Society of Artists, 1773; British Museum), he became Sir Joshua Reynolds's primary interpreter, and produced such atmospheric mezzotints as Mrs Carnac (1778) and Lieutenant-Colonel Banastre Tarleton (1782), which Reynolds described as having 'everything but the colouring of my picture' (Carey, 43). An unparalleled master of mezzotint, Smithtranslated works by many other noted contemporaries, exemplified by George Romney's portrait of The Children of Earl Gower (1781); Gainsborough's of George, Prince of Wales (1783), which precipitated Smith's appointment in 1784 as 'Mezzotinto Engraver to the Prince of Wales'; The Weird Sisters (1785), after Henry Fuseli; Widow of an Indian Chief (1789), after Joseph Wright of Derby; and Slave Trade (1791), after George Morland. Impressions of these prints may be found in the British Museum. Smith exhibited at the Society of Artists in 1773–9, 1783, and 1790 and at the Free Society of Artists in 1782, and showed chalk or pastel drawings and oil paintings at the Royal Academy in 1779–82, 1784–90, 1792, and 1800–05. He held exhibitions in Norwich in 1784 and in Manchester in 1801, and displayed specimens of his 'new process' in oil-coloured prints at the British School in Berners Street, London, in 1803.

While Smith moved in academic painting circles, he also engaged with the popular trade by producing satires and female genre subjects among his 120 original mezzotints and stipples. Early mezzotints, many published by Carington Bowles for 1s. 'plain' or 2s.if coloured, include The Jealous Husband (1771), a prodigal son set (1775), and a group of prostitute subjects for Bowles's 1776–81 series Ladies in Fashionable Dresses. Smith'slater prints, and those produced by other printmakers after his designs, centred on images of elegant, if disreputable, women whose observed or imaginary narratives express a dramatist's keen sense of stagecraft and characterization: among them Promenade at Carlisle House, a 1781 mezzotint (exh. Free Society of Artists, 1782) based on Smith's chalk drawing now in the Victoria and Albert Museum; Credulous Lady and Astrologer, a 1786 stipple by J. P. Simon after Smith's original (exh. Royal Academy, 1785); and What you Will, a 1791 stipple after an oil painting by Smith (Ferens Art Gallery, Hull). An exceptional portrait among the non-commissioned subjects is Smith's 1783 mezzotint of Emma Johnston, who lived with him as his wife in the 1780s. In 1780 he obtained a legal separation from his wife, Ann, on the grounds of her adultery, but he was barred from remarrying. Ann Smith lived until at least 1811. Emma Johnston was the mother of Smith's next two surviving children: the artist Emma Smith (1783–1853), the mother of Julian, Lord Pauncefote, Britain's first ambassador to the United States, and the artist and hostess Eliza Aders (1785–1857). From 1789 Smithlived with Hannah Croome (1757–1829), the mother of his last two surviving children. In his will, dated 12 January 1812, Smith bequeathed to Hannah Croome, 'now living with me', his personal estate.

From 1781 until he sold his stock in 1802, Smith was a prime mover in London's publishing world, issuing his own prints as well as editions after his work and after other artists by more than thirty printmakers (among them William Blake) whom he hired to produce plates or who worked as apprentices and pupils. From 1776 until 1806 the latter group included William and James Ward, Charles H. Hodges, Thomas Girtin, J. M. W. Turner (taken on to hand-colour prints), S. W. Reynolds, William Hilton, and Peter DeWint. Distributing prints throughout the provinces and in such European centres as St Petersburg, Milan, and Paris (where he travelled with Thomas Rowlandson in 1787), Smith capitalized on the sales appeal of such stipple publications as Nightmare (1783) by Thomas Burke after Fuseli, and his 1789 Laetitia set after Morland. As with Laetitia, Smith frequently invented narratives for painters to execute, recognizing a ready market for their printed reproductions. At his peak he played an important role in generating pictorial ideas and in manufacturing thousands of pictures for domestic and foreign consumption. When the French Revolution caused a drastic decline in exports, Smith partially recouped by opening the Morland Gallery in 1793 at his shop in King Street, Covent Garden, and issuing a catalogue listing thirty-six prints planned for production after Morland's rustic subjects. His firm issued a Catalogue of Prints listing 302 other publications dating from 1780 to 1798. In 1802, Smith exhibited his most renowned pastel, Charles James Fox (exh. Royal Academy; Thirelstane Castle Trust, Berwickshire), and four years later he moved to Newman Street.

Smith's avocations included 'field sports, pugilism, and the stage; in all of which, if not an adept, he was an excellent judge' (British school of engraving, 69). A gregarious host, with friends among artists, writers, actors, and politicians in whig circles, he was always ready 'to please those who are fond of a song and a story', wrote Edward Brayleyin 1802. Henry Angelo's Reminiscences (1828–30) give numerous references to boisterous parties in Smith's house where he served wines imported in exchange for cash income from print sales: he 'was famed for his Burgundy'. However unjudgemental, Angelo's recollections helped to substantiate posthumous criticism of Smith's indifference to retaining wealth and his so-called moral shortcomings. William Carey wrote in 1827 that Smith specialized in themes of 'gay ladies of fashionable notoriety'; moreover, he 'dissipated his time and money with little thought and was incapable of resisting the calls of pleasure'. By dwelling on issues of personality, most commentary for the succeeding 150 years clouded Smith's achievements as an original artist and publisher to assert that the quality of his work and choice of subjects mirrored a dissolute life. On the contrary, plentiful evidence testifies to a man of disciplined habits who rose early to work. Certainly a bon vivant, irreverent towards social conventions, Smith was known for his integrity and generosity. An enormously productive and inventive artist, he shaped his publications with a keen awareness of their market demand and was widely praised for his guidance and advice to young artists. Among those he counselled was Sir Francis Chantrey, who sculpted a plaster bust of Smith (exh. Royal Academy, 1811; Ashmolean Museum) and, in 1825, a marble version (V&A).

After 1808 Smith, who was growing deaf, based himself in Doncaster and travelled largely in Yorkshire on commissions for pastel portraits. Following an asthmatic attack, he died on 2 March 1812 in Doncaster, where he was buried. The most comprehensive museum holdings of his prints may be found in the British Museum, London, and the Yale Center for British Art, New Haven, Connecticut.