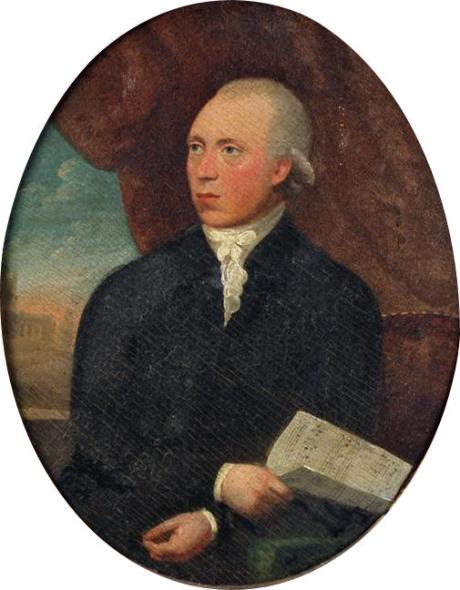 Johann Carl Christian Fischer (1733 – 29 April 1800) was a German composer and oboist, one of the best-known oboe soloists in Europe during the 1770s Employed as a music copyist and theatre director for the Duke of Mecklenburg-Schwerin at Ludwigslust, Fischer is now credited with the unique Symphony with Eight Obbligato Timpani, formerly attributed to Johann Wilhelm Hertel, court composer at Schwerin. He spent some time in Dresden, but left after the Prussian occupation in the Seven Years' War for extensive concertizing tours, ending in London, where he was active as a performer, composer, and a teacher, and introduced the Continental narrow-bore model of oboe that replaced the bright and penetrating straight-topped English type.In London Fischer joined the largely German "Queen's Band" of George III's German Queen, Charlotte of Mecklenburg-Strelitz. Fischer published several teaching manuals for the oboe, with varying titles: The Compleat Tutor for the Hautboy (ca 1770), New and Complete Instructions for the Oboe or Hoboy (ca 1780) and The Hoboy Preceptor (1800). Among his students was composer and oboist Charles J. Suck. An etching/aquatint A Sunday concert by Charles Loraine Smith, published 4 June 1782, shows a distinguished musical group gathered round a harpsichord, with Fischer and Charles Burney among them. Mozart composed a set of Twelve Variations in C on a Menuett of Johann Christian Fischer (K.179 [189a]).

John Raphael Smith was apprenticed to a linen-draper in Derby, and afterwards pursued the same business in London, adding to his income by producing miniatures. He then turned to engraving and executed his plate of the "Public Ledger," which had great popularity, and was followed by his mezzotints of "Edwin the Minstrel" (a portrait of Thomas Haden) and Indian Widow, after Wright of Derby, and "Mercury Inventing the Lyre," after Barry. He reproduced some forty works of Reynolds, some of which ranked among the masterpieces of mezzotint, and he was appointed engraver to the Prince of Wales. Adding to his artistic pursuits an extensive connexion as a print-dealer and publisher, he would soon have acquired wealth had it not been for his dissipated habits. He was a boon companion of George Morland, whose figure-pieces he excellently mezzotinted. Smith was the teacher of J. M. W. Turner. His registered pupils were William Hilton, Charles Howard Hodges, Christiaan Josi, Samuel William Reynolds, James and William Ward (engraver), and Peter de Wint. In 1778 Smith was commissioned to complete a mezzotint engraving by John Milnes following his purchase of a painting and all known engravings of the work of Joseph Wright of Derby. The painting was called The Captive and the engraving was used to make just twenty impressions before it was destroyed. One of these rare engravings is in Smith's home town at the Derby Museum and Art Gallery. He painted subject-pictures such as the "Unsuspecting Maid," "Inattention" and the "Moralist," exhibiting in the Royal Academy from 1779 to 1790. Upon the decline of his business as a printseller he made a tour through the north and midland counties of England, producing much hasty and indifferent work, and settled in Doncaster. The artistic merit of the sculptor Francis Legatt Chantrey was spotted by Smith, who gave him lessons in painting. Chantry later did a bust of Smith in appreciation and there is a painting of Chantry by Smith. Smith died in Doncaster. As a mezzotint engraver Smith occupies the very highest rank. His prints are delicate, excellent in drawing and finely expressive of colour. His small full-lengths in crayons and his portraits of Fox, Horne Tooke, Sir Francis Burdett and the group of the duke of Devonshire and family support his claims as a successful draughtsman and painter. He had a very thorough knowledge of the principles and history of art, and was a brilliant conversationalist.