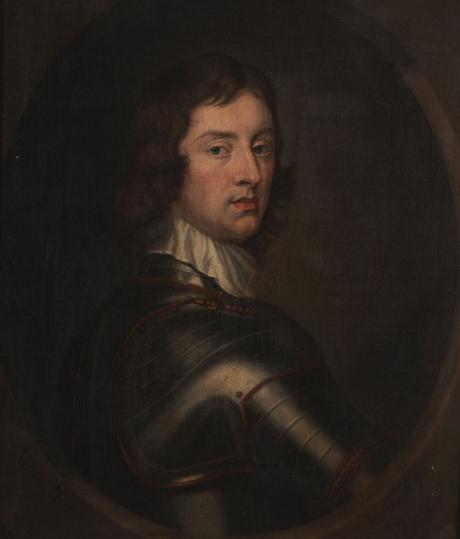 John Mordaunt, first Viscount Mordaunt of Avalon (1626–1675), royalist conspirator, was born on 18 June and baptized on 20 June 1626 at Lowick, Northamptonshire, the second son of John Mordaunt, fifth Baron Mordaunt and later first earl of Peterborough (bap. 1599, d. 1643) [see under Mordaunt, Henry], and his wife, Elizabeth (1603–1671), daughter of William, first Baron Howard of Effingham. He was educated privately in France and Italy and it is unclear when he returned from the continent. However, he was in England by July 1648 when he joined his elder brother Henry Mordaunt, second earl of Peterborough, in a royalist uprising. John raised 200 horsemen for the king, but the rising failed and he, along with his brother, fled into exile, staying for a time at The Hague.

Mordaunt had returned to England by 1652, when a challenge to a duel from Brian Cockayne ended in a brief stay in the Tower. He was on the fringes of royalist conspiracy throughout the early and mid-1650s; in 1654 Sir Edward Hyde wrote to him, accepting his offer of service. But he did not play an important role until after his marriage, on 7 May 1657, to Elizabeth (1632/3–1679), daughter of Thomas Carey, second son of Robert, earl of Monmouth. That year he promised 400–500 men for Charles II, and in 1658 he plotted with the marquess of Ormond, in England on a secret visit. A royalist turncoat, John Stapley, betrayed Mordaunt and he was arrested on 1 April 1658. Closely questioned by Cromwell himself he was released and rearrested on 15 April, charged with treason. Mordaunt's trial, before a special commission of forty, began on 1 June, and he avoided the block by a mixture of judicious bribery and blind luck. After first refusing to accept the court's jurisdiction he finally pleaded not guilty. A key witness, one Morley, escaped—possibly through Elizabeth Mordaunt's means—and one of the judges, Colonel Thomas Pride, who was expected to favour a conviction, was taken ill and did not vote. There were nineteen votes for acquittal and nineteen for conviction; the president of the court, John Lisle, spared Mordaunt with his casting vote.

Released shortly afterwards Mordaunt immediately returned to his work for the king. His career as a royalist plotter was difficult: though he had the support and trust of the king, Ormond, and Hyde, many royalists disliked and resented him. Through his mother, a devout presbyterian, he had connections with discontented peers and gentlemen, once parliamentarians, who now favoured a restoration. The exiled court hoped that he could forge an alliance between presbyterians and royalists. Older royalists, particularly members of the devoted, if ineffectual, Sealed Knot, refused to co-operate with Mordaunt, who did not make matters any easier by his headstrong impatience. Hyde expected Mordaunt to be the acknowledged leader of the royalist cause in England and in March 1659 Charles named Mordaunt, along with several members of the Knot, to a ‘Great Trust and Commission’ whose charge was to effect a restoration. The members of the Knot refused to act, and by July 1659 the commission was a largely presbyterian body, dominated by Mordaunt. A mark of the king's favour came in March 1659, when he signed a warrant for Mordaunt's viscountcy as Viscount Mordaunt of Avalon. Despite this, however, bitter divisions among the royalists continued.

About June 1659 Mordaunt returned from a trip to Brussels prepared to lead a new rising. The confused political situation after Richard Cromwell's fall in April offered new hope for the royalist cause. But continuing bickering among royalists and the efficiency of the government's intelligence doomed Mordaunt's plans. Originally planned for July, the uprising was delayed several times, and on 28 July the council of state ordered his arrest, though he was not taken. The Sealed Knot once again refused to lend any assistance, and when Mordaunt finally appeared for the king near Barnstead Down in Surrey in early August only thirty men turned up. He and his followers narrowly avoided capture, and Mordaunt hid in London until he could make his escape to France. He landed at Calais on 7 September 1659.

By the time Mordaunt arrived in France the only serious royalist uprising, led by Sir George Booth in Cheshire, had been put down. This left the erstwhile royalist general kicking his heels in Calais, assigning blame for the disaster to others, though his own poor planning undoubtedly played a role in the defeat. In the following weeks Mordaunt nursed hopes of a falling out between parliament and the army. When General Lambert expelled the Rump on 13 October 1659 Mordaunt prepared his return to England, and was in London by 22 October. Indefatigable as ever he worked to advance the king's fortunes, plotting a French invasion and yet another uprising. But during these months Mordaunt's credit was on the wane at court. Perceived as a creature of Hyde's, his attempt to distance himself from Sir Edward did him no good with any faction. Sir John Grenville, a kinsman of General George Monck, overshadowed Mordaunt during the winter of 1659–60. The viscount's effectiveness was further reduced as his relations with the presbyterians frayed over their insistence upon a conditional restoration.

Despite these setbacks Mordaunt remained among the most active and well-known royalist conspirators. He was again in France in November 1659, consulting with the king and arguing fruitlessly for a French invasion. He was still in France when the Rump was restored on 26 December, but he had returned to London by 13 January 1660, still pleading for French intervention and warning the court against trusting Monck. Mordaunt remained in the dark about Grenville's negotiations with the general; his days of leadership were now over, and he became a spectator more than an actor in the events leading up to the Restoration. In March he failed in his desire to obtain a vacant secretaryship of state, a sign of his waning influence. The post went to William Morice, a client of Monck's. Mordaunt was among the thousands who welcomed Charles II to Dover on 25 May, and Charles knighted him there, along with his rival, the general.

Although Mordaunt devoted a dozen years to the king's cause—he was certainly among the most active, if not the most successful, of royalist conspirators—his rewards were comparatively modest. Charles named him lord lieutenant of Surrey and gave him command of a regiment of horse. The king also appointed him governor of Windsor Castle and ranger of the forest there, and gave him the keepership of the Great Park of Windsor. He did at least obtain a partial share of the Newcastle coal farm, which must have provided a steady income. His lack of success at the Restoration court must in some part be due to his personality: he was clearly difficult to deal with at times. In 1664 he served as a volunteer in the Royal Navy, provoking Samuel Pepys to complain bitterly about ‘gentlemen reformadoes’ who were ‘good for nothing while they serve but to impoverish their captains and enslave them … as my Lord Mordaunt in particular did do’ (Tangier Papers, 120). Pepys even disliked Mordaunt's literary efforts, writing about some of the viscount's poetry, ‘But lord they are but sorry things, only, a lord made them’ (Pepys, Diary, 5.352).

Clarendon believed that his friend was unjustly treated, but when Mordaunt was attacked in the parliamentary session of 1666 many hoped to see him punished. William Taylor, surveyor of Windsor Castle, complained to the Commons that in 1661 Mordaunt had turned him out of his lodgings, imprisoned him, and attempted to rape his daughter. The truth of the most sensational charge was questionable, but it is clear that Taylor had provoked Mordaunt to act precipitately by standing for the Commons from New Windsor against the governor's wishes. Parliament duly impeached Mordaunt on 18 December 1666. He responded to the charges in January 1667 in a written answer, but the Lords never heard witnesses in the case. The king prorogued the session in February, and pardoned Mordaunt in July, before proceedings resumed. The case was briefly a cause célèbre; Pepys's friend Captain Cocke claimed that people were so incensed about Mordaunt's escape that a new civil war threatened. An attempt to revive the charges in the next session fizzled out, but by summer 1667 rumours circulated that Mordaunt would lose his offices. In fact he retained his Windsor offices until September 1668, when he did resign, keeping only his lieutenancy of Surrey. The fall of his friend and protector, Clarendon, probably played a part in his retirement; he never took any significant part in politics afterwards. In 1668 Mordaunt joined his wife in Montpellier, France, where she had gone for her health, and which was also Clarendon's home in exile. The Mordaunts remained in France until 1669, when they returned to their house at Parson's Green, Middlesex. Mordaunt died of a fever at Parson's Green on 5 June 1675 and was buried in All Saints' Church, Fulham, on the 14th. He left eleven children; the eldest was Charles Mordaunt, third earl of Peterborough, the famous general of the War of the Spanish Succession.

John Alexander, son of an Aberdeen Jacobite doctor, was the great-grandson of George Jamesone, the most famous Scottish painter of the seventeenth century. After some time in London, copying Scottish Historical Portraits .Alexander travelled to Italy in 1711 where he studied under Giuseppe Chiari and received commissions from the Stuart court in exile and  he painted British tourists including Lord Chief Justice Coke (1714). When he returned to Scotland in 1720 he worked for theThe Earl of Mar and  Duke of Gordon, a Catholic and a staunch Jacobite, and produced his most ambitious work, a ceiling painting for Gordon Castle. Most of his clients were from the north-east of Scotland and many were Jacobites. He took up arms for Prince Charles in the 1745 Rising and became a fugitive after Culloden but was back in Edinburgh working openly by 1748.  At The time of his death he was painting  the "Escape of mary Queen of Scots" from Loch Leven castle" His daughter married Sir George Chambers in 1768. He died near Edinburgh in 1760.