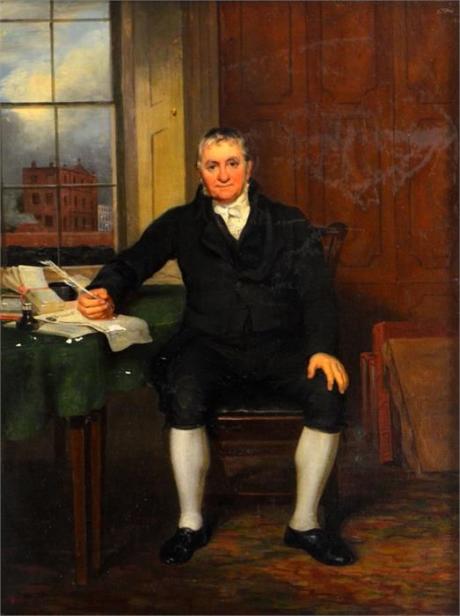 There was a Portrait of the Late Mr Frewer exhibited in 1816,  There is an engraving  by William Camden Edwards, after Joseph Clover original portrait of Eadey Frewer (née Jacob) the wife of John Harris Frewer. The line engraving was executed in 1818. There was also a portrait of Thomas Mickelburgh, Merchant  chair of the Farmers Club Cromer, exhibited in 1813 at the Norwhich School Exhibitions organised by John Crome.There was one portrait exhibited at the Royal Acdemy of the Rev C Townley LLD in 1817 no 415, but this is unikely. Mr Frewer's wife was a teacher of  drawing in Norwhich We thank Anthony Clover with his help in cataloguing this portrait.

Joseph Clover, was an artist of the Norwich School of Painters. He was predominantly a landscape and portrait painter and many of his paintings can be viewed here. Although he had strong links to Norfolk, he preferred to live in London and was very close to his nephew from the time that Joseph arrived in London to study medicine. Clover's diaries record regular visits to his uncle, and frequent loans of £5.00 There is no record of these loans being repaid, although they may have been money provided via his uncle from his family in Aylsham. Clover actually first moved to London in 1807, and stayed in a variety of lodgings before settling at Newman Street in 1816. Newman Street off Oxford Street , where he kept more or less open house for other members of the Norwich School.

He was a member of the Swedenborgian church and a trustee for many years. He was part of a Swedenborgian congregation in London and lived at 44 Newman Street - a street which was popular with artists

Uncle Joseph was a favourite with many of the next generation of the Clover family and there are many surviving letters to him from his nieces and nephews. Amongst his many paintings are several of the family, notably a portrait of Joseph T Clover, now in the Royal College of Surgeons in London, a self portrait which includes his two brothers, John Wright and Thomas, and a portrait of his brother Thomas' wedding.

Joseph never married. He was engaged to Ann Berry, daughter of Mary Berry of Aylsham, but after Ann's death at the early age of 20, he remained a bachelor for the remainder of his life. When he died in 1853, he named his nephew Joseph as the executor of his will, leaving bequests to all his nieces and nephews.