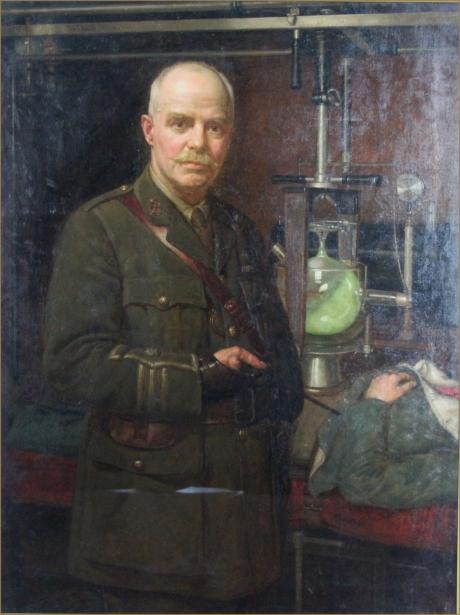 John Francis Hall- Edwards, (1858–1926), surgeon and radiographer, was a British doctor and pioneer in the medical use of X-rays in the United Kingdom. He was born John Francis Hall Edwards in Moseley Road, King's Norton, Worcestershire, on 19 December 1858, the son of John Edwards, a druggist who went on to qualify in medicine in which he had a practice in Sparkbrook, and his wife, Fanny Dixon, née Hall. He was educated at King Edward VI Grammar School, Birmingham, and attended the Queen's College Medical School, where he was for three years assistant demonstrator in practical histology to the professor of physiology, Richard Hill Norris. His time with Norris, who invented the first dry plate used in photography, sparked a life-long interest in photography. In 1885 he qualified as a licentiate of the Royal College of Surgeons, Edinburgh, and entered medical practice in Woodstock Road, Moseley. On 14 February 1893 he married, at Aston register office, Constance Marie di Pazzi Clutton Blair Salt (1866–1923), daughter of John Clutton Blair Salt, manufacturer and dealer in works of art, of Birmingham. They had one adopted daughter, Violet Primrose Bell.

While in practice in Moseley, Hall-Edwards (who began to hyphenate his name at the turn of the twentieth century) established a standing as a photographer. He was elected president of the Midland Camera Club (1891–3), addressed the London Camera Club (1895) and in 1895 was elected an honorary fellow of the Royal Photographic Society. He studied photography in connection with microscopic work and won his first prize for this in 1892. He went on to win numerous prizes for his photographic work.

Following early experiments on electricity in surgery, Hall-Edwards devoted himself to X-rays, working day and night after their discovery by Wilhelm Roentgen became public early in 1896. On 12 February 1896 he made an X-ray photograph of a fellow practitioner's hand, revealing a sterilized needle inserted under the skin. He went on to take the first British X-ray for the purposes of an operation, as well as the first X-ray of the human spine. In 1899 he became surgeon radiographer to the General Hospital, Birmingham. He sold his practice in Moseley, undertaking X-ray examinations for many specialist hospitals in Birmingham from his radiological private practice in Newhall Street. He recognized the potential of radiography to treat lupus, ringworm, and other skin diseases.

Owing to the initiative of Hall-Edwards, the first X-ray field practice was organized in connection with the 1st volunteer battalion of the Warwickshire regiment. He volunteered for service in the South African War, and in February 1900 was appointed surgeon radiographer to the Imperial Yeomanry Hospitals. He spent fourteen months in South Africa, in Deelfontein and Pretoria, and proved the utility of X-rays to military surgery. His letters to the Birmingham Daily Post during the conflict provide a commentary on the war and aroused public attention to the treatment of horses at the front in particular. On his return, he resumed his radiographic work at the general hospital and during 1904–5 edited the journal The Archives of Roentgen Rays. In 1906 he was appointed president of the British Electro-Therapeutic Society.

As a result of lengthy exposure times, Hall-Edwards developed 'X-ray dermatitis' some months after taking his first X-rays in 1896. By 1904, the cancer had progressed significantly and he read a paper before the British Medical Association detailing his case and calling for the introduction of protective measures. In 1908, in rapid succession, his left hand and forearm and four fingers from his right hand were amputated. His left hand, showing radiation damage, was donated to the University of Birmingham medical school museum. Soon after the first of these operations, a fund was raised by local scientific and medical men and, in 1908, he was granted a civil service pension of £120 per annum by Edward VII. In 1911 he was elected a fellow of the Royal Society of Edinburgh. During the first fourteen months of the First World War, he undertook much recruitment work as senior medical officer in Birmingham, was promoted major on his appointment as senior medical officer at the military command depot at Sutton Coldfield for seventeen months, and, finally, surgeon radiographer for the X-ray departments at the First Southern General Hospital, the Hollymoor, Monyhull, and Rubery military hospitals.

Despite his infirmities and pain, made tolerable with opium, Hall-Edwards was for twenty years senior medical officer in charge of the X-ray department at the general hospital, and carried on his private radiography practice. His research extended to designing equipment to improve the safety of users, including steel gauntlets and lead aprons. In 1920 he gained the diploma of radiological medicine, Cambridge. In 1922 he became the first medical man in civil practice to receive the Carnegie Hero Fund Trust medallion together with a £100 annuity. An ordinary member of the British Medical Association for over twenty-five years, Hall-Edwards joined only eleven other individuals in April 1926 to become an honorary life council member of the association in recognition of his services to medicine.

Hall-Edwards was elected to Birmingham city council as a Unionist at a by-election in the Rotton Park ward in 1920. He was re-elected in 1922 and 1925 and served on the Public Health, Museum and Art Galleries, and Public Libraries committees. He was council representative on the committee of the Midland Institute and campaigned extensively for former servicemen. Although not prominent in public debate, he urged public health departments to educate nurses and welfare workers on the subject of cancer, a subject addressed in his literary activities. Besides Cancer: its Control and Prevention (1926) he published extensively on X-rays, as well as, for two years, a lively weekly entitled Our City.

Hall-Edwards pursued many hobbies, including photography and landscape painting, having taught himself to paint using the surviving thumb of his right hand and an artificial finger. He also remained an active member of the Birmingham Photographic Society; nineteen of his lantern slides are included in the society's archives in the Birmingham City Archives. He was particularly interested in 'spirit photography', and occultism generally, and was keen to expose fraudulent mediums. He criticized the credence given by Arthur Conan Doyle to the Cottingley ‘fairy photographs’. His wife predeceased him and the last two years of his life were otherwise spent confined to his home in Edgbaston, assisted by his housekeeper and nurse. He died there, at 112 Gough Road, on 15 August 1926. The cause of death was registered as 'Xray dermatitis 24 years' and 'chronic nephritis 2 years' (d. cert.). He was cremated at the Birmingham crematorium, Perry Barr, following a memorial service at St Philip's Cathedral, Birmingham, on 19 August 1926. He was survived by his adopted daughter, Violet Primrose Hall-Edwards (née Bell). His name was among the 136 originally engraved on the Radiation Martyrs' Memorial erected by the German Roentgen Society and unveiled on 4 April 1936 near the radiology department at St George's Hospital in Hamburg, Germany.

He was a Painter of Classical subjects, Portraits and Landscapes. Exhibited at The Royal Academy between 1882 -1939, The Royal Institute of Painters in Watercolours, The Royal Society of Portrait Painters, The New Gallery and other London and provincial Galleries in Britain also in Europe and America, especially New York.

Arthur Nowell was born Garndiffaith, Trevethin in Wales. His father was a Wesleyan Minister who moved every two or three years arriving in Lancashire in 1873. Hereabouts his father was to remain, allowing Arthur to attend the Manchester School of Art. In 1893 he entered The RA Schools leaving in 1898 following the dual and unique awards of The Gold Medal and The Turner Prize. With the accompanying bursary he studied in Paris and toured Europe. His large Biblical canvas The Expulsion of Adam & Eve (Walker A.G. Liverpool) brought him wider recognition being the painting of the year when first hung at The New Gallery in 1897. By now he had been commissioned to paint a number of portraits both in Manchester and London. These early connections proved pivotal and led not only to marriage but his commissions to paint the portraits of King George V and Queen Mary of which there are a number in The Royal Collection and elsewhere. He had a seasonal studio in The Singer Skyscraper in New York (1920s). As public interest in “High Art” waned his initial enthusiasm for this genre mostly, but not exclusively, made way for portraiture and his beloved watercolours in which he engaged as he travelled in Europe and especially Scotland.