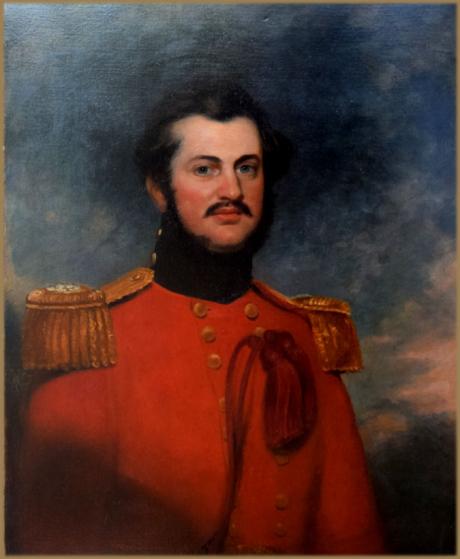 Waugh of Shaw standard bearer of Flodden 1513, Painted by Beechey at Lucknow 1852"

Major General Sir Andrew Scott Waugh (1810-1878) was a British army officer and surveyor now remembered as the man who named the highest mountain in the world after Sir George Everest, his predecessor in the post of Surveyor-General of India.Waugh, Sir Andrew Scott (1810–1878), army officer and surveyor, eldest son of General Gilbert Waugh, military auditor-general at Madras, grandson of Colonel Gilbert Waugh of Gracemount, Midlothian (descended from Waugh of Shaw, standard-bearer at Flodden Field), and nephew of Sir Murray Maxwell of the Royal Navy, was born in India on 3 February 1810. He was educated at Edinburgh high school, and, after passing through Addiscombe in 1827 in half the usual time, came out first of his term and was commissioned lieutenant in the Bengal Engineers on 13 December 1827. After training at Chatham he went to India, arriving there on 25 May 1829.

Waugh was appointed in 1830 to help build a new foundry at Kashipur. On 13 April 1831 he was appointed adjutant of the Bengal Sappers and Miners, and on 17 July 1832 to the great trigonometrical survey of India under the immediate direction of George Everest, the surveyor-general. Waugh and his friend Lieutenant Thomas Renny (afterwards Major Thomas Renny-Tailyour) were the first engineers on the Indian establishment to join the department as subalterns and to make their careers in it. In 1833 they were sent to Sironj, to carry a series of triangles up one of the meridians fixed by the longitudinal series. They explored the jungle country between Chunar and the sources of the Son and Narbada up to Jubbulpore, and submitted a topographical and geological report to the geographical department of the India Office.

In November 1834 Waugh joined the headquarters of the surveyor-general at Dehra Dun, to help measure the baseline. In April 1835 he was appointed astronomical assistant for the celestial observations connected with the measurement of the great arc, and at the end of that year he was at Fatehgarh, conducting the rougher series of the great trigonometrical survey. In January 1836 he joined Everest at Saini, to help measure the arc of the meridian extending from Cape Comorin to Dehra Dun, starting with the northern baseline in the Dehra Dun valley, and connecting it with the baseline near Sironj, some 450 miles to the south; and remeasuring the latter in 1837 with the new compensation bars which had been used at Dehra Dun. The operation was so accurate that the difference of length of the Dehra Dun baseline as measured and as deduced by triangulations from Sironj was only 7.2 inches.

In November 1837 Waugh was appointed to work southwards on the base Pagaro to Jaktipura. The work was completed by March 1838, when he was sent to test the accuracy of the triangulation between Bedar and Takalkhard and to lay out the site of an observatory at Damargidda. In October he began fieldwork with azimuth observations at Damargidda, and, working north with the triangulation, completed the work by April 1839. He shared with Everest the arduous observatory work carried on simultaneously at the stations of Kaliana, Kalianpur, and Damargidda from November 1839 to March 1840, by which the arc of amplitude was determined. In 1841 Waugh was engaged in the remeasurement of the Bedar base. Between 1834 and 1840 he had conducted the Ranghir series of triangles in the North-Western Provinces, and in 1842 he rapidly but accurately carried the triangulation through the malarious Rohilkhand terai.

At the end of 1843 Everest retired, recommending that Waugh, whose abilities in both the theoretical and practical aspects of survey work he had consistently praised, succeed him as surveyor-general. Although only a subaltern of Royal Engineers, and although he had only eleven years' experience of surveying, Waugh was accordingly appointed from 16 December 1843. In 1844 he married Josephine (d. 1866), daughter of Dr William Graham of Edinburgh, and was promoted captain on 14 February of that year. He began his tenure as surveyor-general by carrying out the remaining seven series projected by Everest. These covered some 28,000 square miles and originated from the Calcutta longitudinal series on the ‘gridiron system’. The eastern side was formed by the Calcutta meridional series (1844–8), which terminated in another baseline near the foot of the Darjeeling hills.

Waugh took a leading role in the north-east Himalaya series, connecting the northern end of the meridional series. The line of the country was along the base of the Himalaya terai, a malarial submontane tract in which many of his staff died. These operations fixed the positions and heights of seventy-nine of the highest Himalayan peaks in Nepal and Sikkim, including Peak XV, named Mont Everest in 1856 by Waugh. The series was then the longest ever carried between measured bases, being 1690 miles long from Sonakoda to Dehra Dun.

On 3 December 1847 Waugh was given the local rank of lieutenant-colonel. After completing the South Konkan, the Madras coast series, the South Parisnath, and South Maluncha series, he was free to undertake a system of triangulation to the west of the great arc series over the vast territory, much of it recently acquired, that lay in Sind, the North-Western Provinces, and the Punjab. The Chach base, near Attock, was measured in 1851–2, and the north-west Himalayan series, emanating from the Dehra Dun base, extended to it; and from Sironj the Calcutta great longitudinal series was carried westward to Karachi, closing on another baseline at Karachi, measured in 1854–5 under the surveyor-general's immediate supervision. Waugh was promoted major in the Bengal Engineers on 3 August 1855, and in 1856 the great Indus series was begun, forming the western side of the survey on its completion in 1860. In 1856 Waugh instituted a series of spirit-levelling operations to determine more accurately the heights of the baselines in the interior, beginning in the Indus valley. He was promoted regimental lieutenant-colonel on 20 September 1857, and the same year was awarded the patron's gold medal of the Royal Geographical Society. In 1858 he was elected fellow of the Royal Society. In 1859 the survey of Kashmir under T. G. Montgomerie was completed, earning Waugh, who had supervised it, many congratulations.

During Waugh's tenure of office he advanced the triangulation of India by 316,000 square miles, and of this 94,000 were topographically surveyed. He was promoted colonel on 18 February 1861, and retired from the service on 12 March following. He received the honorary rank of major-general on 6 August 1861, and in the same year he was knighted. He retired to London where he was a deputy lieutenant of the city for many years, a prominent member of the council of the Royal Geographical Society (and its vice-president from 1867 to 1870), honorary associate of the geographical societies of Berlin and Italy, a fellow of Calcutta University, and an active committee-man of the London Athenaeum. In 1870 he married Cecilia Eliza Adelaide, daughter of Lieutenant-General Thomas Whitehead KCB, of Uplands Hall, Lancashire. He died at his home, 7 Petersham Terrace, Gloucester Road, London, on 21 February 1878, leaving his wife and at least one son from his first marriage.

The results of Waugh's work while surveyor-general are given in some thirteen volumes and reports deposited in the India Office and in 1861 he published Instructions for Topographical Surveying. He was energetic and enthusiastic, as well as meticulously accurate. He was a distinguished surveyor-general even by comparison with such predecessors as Lambton and Everest.

Beechey, George Duncan (1797–1852), portrait painter, son of Sir William Beechey (1753–1839), portrait painter to Queen Charlotte, and his second wife, Anne Phyllis Beechey, née Jessop (1764–1833) [see under Beechey, Sir William], miniature painter, was born at Great George Street, Hanover Square, London, on 20 October 1797. Frederick Beechey and Richard Brydges Beechey were his brothers, and Henry Beechey his half-brother. His godfather was George III. Nothing is known about Beechey's education except that he was taught by his father, a number of whose paintings he copied and whose profession he followed. He exhibited portraits at the Royal Academy from 1817, for example Captain Frederick Beechey (exh. RA, 1828; NMM), but as his father's success began to wane so George Beechey's commissions declined. Encouraged by his friends to visit India, he obtained the necessary permission from the East India Company on 18 June 1828, arriving in Calcutta a year later. He quickly established himself as a portrait painter with a half length of Dr John Adam, secretary to the medical board (1829; Asiatic Society of Bengal, Calcutta), a full length of Lord Combermere (1830), for the Bengal Club, and a number of family portraits painted for his patron Prosunno Kumar Tagore. He exhibited portraits at the Calcutta Brush Club in 1831 and 1832. The last painting Beechey sent to the Royal Academy, for the exhibition of 1832, was a portrait, A Hindoo Lady (engraved as Hinda by G. H. Phillips, 1835), which received much favourable comment.

Six years after the retirement in 1828 of Robert Home from the service of the king of Oudh, Beechey succeeded him as court painter and controller of the household in continuation of the long-established enthusiasm of the nawabs for British culture. His uncompromising integrity enabled him to put a rein on the excesses of the palace until he withdrew from the court on the death of Muhammad Ali Shah in 1842. He remained in Lucknow until his death, painting both Englishmen—Lord Auckland (1837)—and Indians, including Wajid Ali Khan, the last of the kings of Oudh, and was remarkably given access to the royal zenana to portray Wajid Ali's favourite wife and other court beauties, one in the guise of The Death of Cleopatra. Few of Beechey's paintings appear to have been identified, and a number must have perished during the Indian mutiny of 1857, but those that are known reflect his father's style, the pose clearly outlined, the eyes sparkling and direct, the finish smooth, as seen in Two Children, Herbert and Rose, on a Terrace at Poona (1844; ex Sothebys, 16 July 1986) and a portrait of the young Duleep Singh (1851; ex Sothebys, 22 May 1990) seated in solemn majesty, commissioned by his protector, the govenor-general of India, James Ramsay, tenth earl of Dalhousie.

Embracing the customs of his adopted land, Beechey married Hussaini Begam, daughter of Muhammad Ali Shah, king of Oudh, and set up his own house, Dar ol Sarf in the Mariaon cantonment of Lucknow, where their only son, Stephen Richard, was born in 1835. With another woman, named Laddoo, he had a daughter, Charlotte (b. 1837), who was removed from her mother and adopted by Hussaini Begam to be brought up with their son. His wife and the two children were the sole beneficiaries under his will apart from a small bequest to Pecari Sahib, a third consort. In his duties as controller, having married the daughter of the king, Beechey wore Indian dress. A group portrait of a tall European wearing the costume of a nawab standing with his Indian wife and young son (Asiatic Society of Bengal, Calcutta), has been identified as a portrait of the Beechey family. According to his obituarist (Delhi Gazette, 26 October 1852), in addition to his accomplishments as an artist, George Beechey was an amusing companion, a warm and generous friend, liberal and kind-hearted, and of the most incorruptible integrity.

Beechey's fortune was very moderate, and his death on 17 October 1852 was said to have been hastened by grief at hearing of the total loss of the ship in which he had sent to England a large number of his best portraits for exhibition, but his spirit was reported to have lived on to haunt the house in the Mariaon cantonment in which he died.