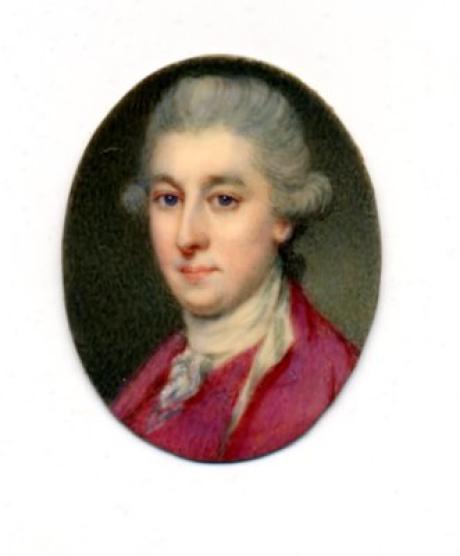 An early 18th century portrait miniature of John Noble, of oval form in a later 9ct gold oval mount with suspension loop, and engraved with his name and his dates 1746-1828, complete with a brown velvet
lined morocco leather case with a dividing hinge front. Inscribed on mount, "John Noble 1746-1828"

John Noble, Esq. Senior Alderman of the Corporation of Bristol. He died at Portland Square, London on 10th January 1828. He was father to John Hatt Noble, Esq of Oprto, Portugal and grandfather to Mrs. George Warre and Mrs. John Graham.

John Noble's daughter, Caroline Noble, married George Warre of the famous port producing family.  The Warre port company was founded in 1670 and, as such, is the oldest English-owned port company. The first Warre family members were not involved with the business until 1729. Warre vintage ports are generally ranked within the top eight or nine of its kind. This company also produces a highly regarded single-quinta port from Quinta da Cavadinha, during undeclared years.

Warre also makes a good Late Bottled Vintage port. The Warre company is now owned by the Symington Group. Andrew Symington was a Scotsman who moved to Porto in 1882 to work for Warre's, a company whose main concern was in the textile industry, with port wine a small subsidiary business. Andrew much preferred the wine side of things, became a partner in the business in 1905, and was offered control of the Portuguese end of the company in 1912 when the head of the firm, George Warre, decided to return to London. By this time, Warre's owned the merged company which had once been Silva & Cosens and Dow's. Andrew bought Quarles Harris (to whose owners he was related by marriage) in 1920, and his heirs and the Warres shared control until 1961, when the Symington family bought out the remainder of the business. The Symington empire was now made up of Silva & Cosens, Dow and Warre, and incorporated Quinta do Bomfim, Quinta do Zimbro and Senhora da Ribeira. Further acquisitions since then include Graham's in 1970 (including its subsidiary, Smith Woodhouse) and Gould Campbell, also in 1970. It is currently the biggest producer of port in the country. As if this were not enough, the Symingtons moved into Madeira in 1988, taking over the Madeira Wine Company which by this time dominated production on the island, having absorbed most of the "famous name" brands since its first stirrings in 1913: Blandy's, Cossart Gordon, Leacock, Rutherford & Miles and no less than 23 other companies have now been assimilated into the Symington Madeira empire, accounting for some 40 percent of the island's production.