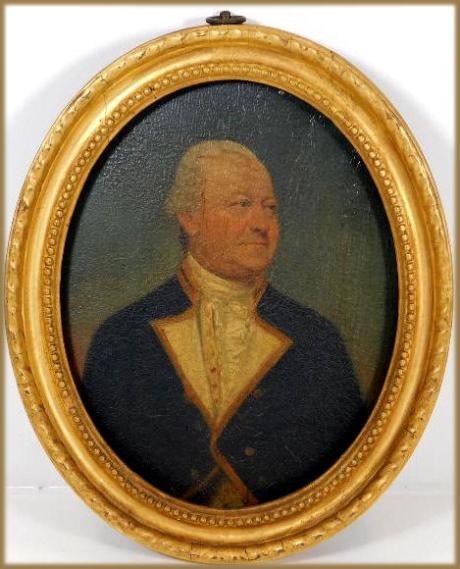 Samber was commissioned lieutenant on 9 April 1760, and in 1771 was serving aboard the Crescent 32, Captain John Corner, going out to the Leeward Islands for a three year tour of duty, during which time Captain Corner died to be replaced by Captain Charles Thompson.

He was promoted commander on 1 February 1780 and saw duty with the armed ship Satisfaction in Scottish waters.

Samber was posted captain on 26 March 1782, and after briefly commanding the Bristol 50 he took up the position of flag-captain aboard the Formidable 90 to Admiral Hugh Pigot when that officer went out to the Leeward Islands in May to succeed Admiral Lord Rodney. He retained this position with Pigot into the following year.

During the Dutch Armament in 1787 he commissioned the Royal Sovereign 100 at Plymouth for the flag of the proposed commander-in-chief, Admiral Pigot, and at the commencement of the Nookta Sound dispute in 1790 he was again appointed to the Royal Sovereign for Pigot’s flag. Both appointments were short-lived due to the rapid de-escalation of the respective disputes.

After retiring to Hampshire Samber did not see any further service, but he became a superannuated rear-admiral in June 1804. He died in 1816.

Samber married Maria Beata Knapton of Lymington and had one daughter, Martha Anne. His address in his will was given as Lymington, Hampshire.

Gervase Spencer was a prolific painter of portrait miniatures in the mid 1700s. Little is known about his origin or how he became an artist. His miniatures are generally well accomplished but what probably makes him better known than many of his contemporary's is that he signed a large number of his productions, usually with his initials GS on the front (the obverse) where they can be seen with easy visibility. He also dated most of his miniatures and as a result they present a fairly accurate record of the fashions of clothes that many of the sitters were wearing at the time. There are some exceptions of course in that, while we can assume that most of his portrait miniatures are painted from life, some were no doubt painted as copies of earlier portraits and so the style of the clothes will in some cases be from a slightly earlier time.

The book 'Collecting Miniatures' by Daphane Foskett, 1979, gives what little is known of his life and there are a few references to him on the internet including the website for the Victoria & Albert Museum in London (www.vam.ac.uk). For images many of the auction houses provide via their websites a good selection of miniatures auctioned over the last decade.

Spencer's date of birth is not know but it is assumed to have been around 1715. According to Vertue, a contemporary commentator, Spencer was a 'footman' to a 'Dr W'. Spencer had apparently enjoyed drawing and had asked to be allowed to copy a miniature belonging to his master's family. He was then encouraged by the family and was eventually able to set up as a fashionable miniature painter. His earliest signed miniatures date from about 1740. During the first half of the eighteenth century it was the norm for miniaturists in Britain to be self-taught rather than undergoing a formal apprenticeship with an established artist. Spencer established his practice in London and his self portrait painted in 1749 notes his address as Marlbro Street / London. Later on he is known to have exhibited at the Society of Artists 1761-1762 and his address was then noted as 28 Suffolk Street. His name also appears in 'Mortimer's Universal Director' (1763), an early trade directory advertising the services of artists and other trades. In addition to watercolour on ivory, he also worked as an enamel painter, a very difficult technique to learn involving unpredictable procedures and requiring a significant outlay in terms of equipment for firing. It is likely that Spencer received some formal training in the production of enamels although one of his contemporaries claimed that 'the knowledge he had gained in that Art was almost purely his own'. Spencer also produced some etchings, as well as a self-portrait in Indian ink.

Portrait of the Minature Painter Gervase Spencer 1715-1764 Drawn after a drawing by Reynolds. Click for larger image.
Gervase Spencer drawing at his easel

Spencer became one of the leading miniature painters of his day. A young competitor starting up in 1748 in London noted only 'two Miniature Painters of Eminence in London'; Spencer, who he admired, and someone he would not name since he despised him. Once established Spencer would have had a number of pupils working with him and this would have helped him to produce the large number of miniatures attributed to him. Henry Spicer (1743-1804) is known to have been a pupil of Spencer but presumably there were also others.

It is not known when or whom Gervase Spencer married but a small portrait of Mrs Spencer exists in the collection of the British Museum. Gervase Spencer died in Great Marlborough Street, London, on 30th October, 1763. He was survived by a daughter who married a Mr Lloyd.