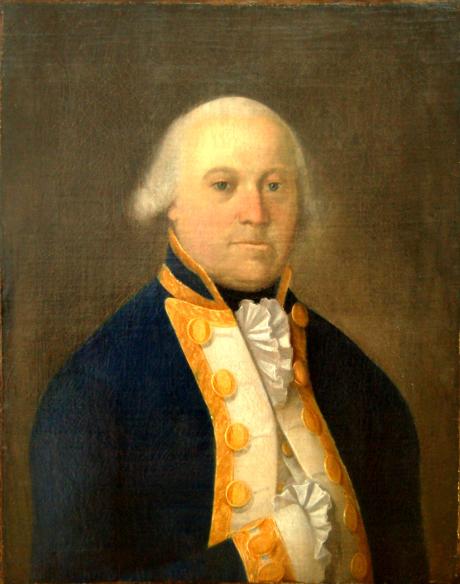 The uniform in the Portrait shows Sir Thomas Louis as a Captain of over three years seniority in the 1787-95 Uniform, we know Sir Thomas became Captain in 1783, though he was not back as a working Captain until  the French wars started in 1793 when this portrait was likely to have been painted. Admiral Louis was at the Battle of the Nile with Nelson as a Captain but missed Trafalgar.

Louis, Sir Thomas, first baronet (bap. 1758, d. 1807), naval officer, was baptized at Holy Trinity Church, Exeter, on 11 May 1758, the son of John Louis (1720–1815), a schoolmaster, and Elizabeth, née Atkinson (c.1724–1798). His grandfather, according to family tradition, was an illegitimate son of Louis XIV. In November 1769, aged eleven, Louis joined his first ship, the sloop Fly (Captain Mitchell Graham); he served on the home station until September 1771 when he transferred to the frigate Southampton (Captain John Macbride). With Macbride he moved to the frigate Orpheus in April

1773 and thence to the Kent (74 guns). In June 1775 he joined the sloop Martin (Captain William Parker) and saw his first foreign service, off Newfoundland. On his return home in January 1776 Louis rejoined Graham in the frigate Thetis in which he remained—visiting Ascension Island and St Helena—until November when he transferred to the Bienfaisant (64 guns), again with Macbride. On 18 July 1777 he was promoted lieutenant and in 1780 he became the ship's first lieutenant. He was present at Augustus Keppel's action off Ushant on 27 July 1778 and, on 16 January 1780, at Admiral Sir George Rodney's ‘Moonlight Battle’

off Cape St Vincent which led to the relief of Gibraltar. The Spanish flagship Phoenix (80 guns) struck to the Bienfaisant, and Louis was appointed her prize-master. With great skill he took her, in her shattered condition and in stormy weather, to Gibraltar. Macbride wrote to Rodney on 20 January 1780: ‘I beg leave to recommend to your attention Mr Thomas Louis to whose diligent and active behaviour the safety of the prize is in a great measure owing. This is the second line of battle ship he has had the charge of within these eight days’

Louis took the much-damaged Phoenix to England, before rejoining the Bienfaisant in time to partake in the skilful capture of the unusually large privateer Comte d'Artois (60 guns) off southern Ireland in August. Louis was again the prize-master. In January 1781 he followed Macbride to the frigate Artois, a recently taken French prize, and on 9 April he was promoted commander with command of the armed vessel Mackworth, convoying the Milford–Plymouth trade. Fifteen months later Louis was appointed to the impress service at Sligo and Cork (again under Macbride) where he raised 5000 men, and on 20 January 1783 he was promoted captain. During the ten years of peace he was on half pay, living near Torquay. On 15 July 1784 he married Jacquetta (1752–1824), daughter of Samuel Belfield of Stoke Gabriel.

They had three daughters and four sons, of whom the eldest, Sir John Louis, second baronet, died an admiral in 1863 having gone to sea with his father in 1793, and the third fought in the Royal Horse Artillery at Waterloo.

On the resumption of war in March 1793 Louis commissioned the Cumberland (74 guns); a year later he transferred to Minotaur (74

guns) as flag-captain to Macbride, now a vice-admiral and commander-in-chief in the Downs. In 1796 he escorted a convoy to the West Indies and back, and late the next year he joined the Mediterranean Fleet. His was one of the ships under Captain Thomas Troubridge which, in June 1798, reinforced Nelson's small squadron and won the battle of the Nile on 1–2 August [see Nelson's band of brothers].

On that night the Minotaur anchored next ahead of Nelson's flagship and received the surrender of the Aquilon (74 guns) after a two-hour duel. Nelson, who had been badly wounded, summoned Louis to his flagship at about 9 p.m. as ‘he could not have a moment's peace until he had thanked him. “Farewell dear Louis, I shall never forget the obligation I am under to you for your brave and generous conduct; and now, whatever may become of me, my mind is at peace”’ (Naval Chronicle, 1, 1799, 287; 3, 1800, 183). The Naval Chronicle emphasizes that the incident is ‘perfectly correct’ (ibid.), though it is doubted in Nicolas's Dispatches and Letters … of Nelson (3.56).

With the other captains, Louis received the gold medal for the victory.

In September 1799 the Culloden (Commodore Troubridge) and the Minotaur liberated Civita Vecchia from the French with their marines and seamen, while Louis himself ‘went to Rome and arranged the evacuation and taking possession of that place … with great ability and exertion’, hoisting British colours over the Capitol (T.

For this he received the Neapolitan order of St Ferdinand and of merit.

In May 1800 Lord Keith flew his flag in the Minotaur during the siege of Genoa, and as a private ship the Minotaur took part in the Egyptian operations of 1801. She returned home the following year.

guns) off Brest and in the channel until he was promoted rear-admiral of the blue on 23 April 1804. He immediately hoisted his flag in Leopard (50 guns), with Francis Austen (Jane Austen's brother) as his flag-captain, and commanded some forty vessels off Boulogne where Napoleon was preparing his invasion force.

In January 1805 Louis (with Austen) sailed to the Mediterranean, joining Canopus (80 guns) just in time to join Nelson, as his second-in-command, in the chase of the Franco-Spanish fleet to the West Indies and back. Off Cadiz on 11 October he was sent by Nelson with six ships to Gibraltar to water, provision, and store, then to escort an east-bound troop convoy past Cartagena, and to return with fresh provisions for the fleet. ‘You are sending us away’, Louis is said to have reproached Nelson; ‘the enemy will come out, and we shall have no share in the battle’, at which Nelson explained that he had no choice but to send his ships to water and provision in detachments. ‘I look upon Canopus as my right hand, and I send you first to insure your being here to help to beat them’ (Dispatches and Letters, 7.63).

In November, having missed Trafalgar, Canopus sailed from Cadiz under Vice-Admiral Sir John Duckworth to the West Indies and fought in the battle of St Domingo on 6 February 1806, a brilliant piece of service in which all five French ships-of-the-line were either captured or destroyed, and for which Louis, the second-in-command, was created a baronet (March 1806) and received a second gold medal.

In November 1806 he was dispatched by Lord Collingwood with a small squadron to reconnoitre the defences of the Dardanelles as a preliminary to the impending expedition to Constantinople to be led by Duckworth. Three months later Louis in the Canopus led Duckworth's squadron up the straits ‘with the gallantry and cool judgement which mark his character’ (Duckworth to his squadron, 4 March, H. B. Louis, 117); on the return (3 March) through the straits the Canopus was struck by huge stone shots fired by the Turks which carried away her wheel and caused much damage to her hull. The squadron then sailed to the coast of Egypt where Louis was left in command. On 17 May 1807 he died on board the Canopus in Alexandria harbour, aged forty-nine, of a ‘sort of complaint’ picked up in the West Indies the previous year.

All of Nelson's band of brothers were characters in their own right.

Thomas Louis, the Captain of the Minotaur, who drew L'Aquilon's fire and relieved the Vanguard in the lurid night of The Nile—"your support," wrote Nelson, "prevented me from being obliged to haul out of the line"—was also, it seems, the greatgrandson of King Louis XIV.

Later he was Governor of Rome, being rowed up the Tiber in his barge by bluejackets, and hoisting the British and Papal colours together on the same staff above the Castle of St. Angelo. His flag-captain in the Leopard—when he commanded the Flying Squadron harassing the Grande Arm& at Boulogne—and the Canopus was Jane Austen's brother. He served under Duckworth as rear-admiral at the victory of San Domingo—where the battle began with the band playing God Save the King followed by Off She Goes, and ended with the oneeyed cock of the Superb crowing exultantly from the wreckage of the poop—and at the double forcing of the Dardanelles, under the fire of granite balls more than two feet across. "Dea,r Loins" enjoyed Nelson's particular affection, and was able to man his ship with volunteers from his own country of South Devon. A memo from his note-book shows a glimpse of the man : "In making and shortening sail the officers of the watches are not to attempt more at once than they have hands to perform ; and if not done as a Man-of-War ought to do it, it is my wish it may be repeated to convince the men that the smartest way of doing everything is the easiest." Fr. Louis's monument of piety to his ancestor is also a spirited sketch of the days when the British seventy-four's decided the fate of nations.