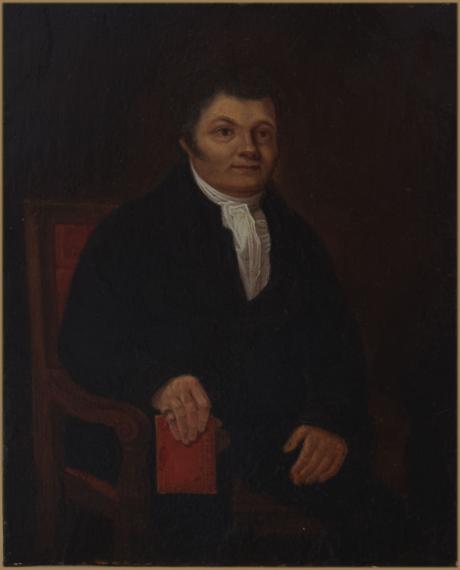 John Angell James, (1785–1859), Congregational minister and author, was born on 6 June 1785 at Salisbury Street, Blandford Forum, Dorset, the fourth child and eldest son of the eight children of Joseph James (1753?–1812), linen draper and button maker, and his wife, Sarah (1748?–1807). Another son of theirs, Thomas (1789–1873), became an influential Congregational minister. Since Joseph James was not a church member, it fell to the mother to instil habits of devotion into her children. John received his elementary education at Blandford and a school conducted by Robert Kell of Wareham, a presbyterian. He was subsequently apprenticed to Bailey, a draper at Poole. It was here that he experienced religious conviction and was encouraged by James Bennett (1774–1862) to undergo preparation for the ministry. In 1802 he entered the academy conducted by David Bogue (1750–1825) at Gosport, supported by a bursary of £30 from the fund provided by Robert Haldane (1764–1842). Since his mother was a General Baptist he had not been baptized in infancy and submitted to the ordinance while at Gosport. In later life James complained that his education had been insufficient to prepare him for his pastoral work. On 18 July 1803, in accordance with the provisions of the Toleration Act, he received at Winchester his licence to preach. In August 1804 he preached at Carrs Lane Chapel, Birmingham, and after receiving a formal call to become its pastor he was ordained on 8 May 1806. He remained minister there until his death. Because of increasing ill health he secured the assistance of R. W. Dale (1825–1895), who became his co-pastor in August 1854 and his successor. On 7 July 1806 James married Frances Charlotte Smith at Edgbaston parish church. She died on 27 January 1819, having had a son and two daughters. On 19 February 1822 John Angell James married Anna Maria, the widow of Benjamin Neale of St Paul's Churchyard. She died on 3 June 1841. Both his wives were wealthy.

James was a significant figure in nineteenth-century nonconformity because his ministry exemplifies the developments that made it a power in the land. The first seven years of his ministry were uneventful, but from 1813 his influence increased and the new chapel that was opened in 1820 was designed to accommodate 2000 worshippers. The membership when he was ordained was forty, with a congregation of 200, but by 1850 it numbered over 1000. This was due both to his impressive preaching and the changes which he introduced into the life of the church. In 1805 its only meetings were the Sunday services and a Sunday school. Over the years an astonishing number of activities were initiated devoted to missionary and evangelistic work, the promotion of philanthropy among the poor, and the education of over 2000 children. Women took a prominent part in the life of the church as, for example, in the Maternal Society, the Dorcas Society, and the Female Benevolent Society for visiting the sick. Among the fruits of these activities were the founding of two new churches in Birmingham. It was quite usual for the church to raise £1200 a year for these and other good causes, while £23,000 was spent on the buildings during James's ministry. All this shows how Carrs Lane Chapel sought to meet the social and cultural needs of Birmingham and how it had attracted those who had profited from the wealth that was produced by its industries.

In his book Christian Fellowship (1822) James argued for closer co-operation between the Congregational churches, and so became one of the founders of the Congregational Union of England and Wales in 1832, a substantial modification of the strict traditional independency of the Congregational churches. In a meeting of the union in 1842 he advocated the formation of a body that would embrace all those of evangelical convictions. This was realized with the formation of the Evangelical Alliance in 1845, of which body he was the first president. His wish to include evangelical Anglicans in this common front explains his antipathy to the militant nonconformity of Edward Miall (1809–1881) as well as his opposition to the formation by him of the Anti-State Church Association in the 1840s. This did not prevent James from criticizing the ways in which the established church impinged upon the liberties of nonconformists, as in his Dissent and the Church of England (1834), but he advocated moderation. James shared the diffidence of the older nonconformity in his distaste for active participation in national politics. But his enthusiasm for the work of the London Missionary Society compelled him to realize that the abolition of slavery could only be achieved by political action. Though he was not an enthusiast, he was an activist with regard to public affairs in Birmingham. He was seriously interested in providing for others the educational advantages that had eluded him. Hence the readiness with which he presided over the council of Spring Hill College from its inception in 1839 until his death.

James was a prolific author, as the seventeen volumes of his collected works (1860–64), edited by his son, demonstrate. His moderate Calvinism found expression not in the systematic exposition of doctrine but in promoting practical spiritual and moral guidance. His best-known book was the Anxious Enquirer. It was first published in 1834 and became extraordinarily popular. Fifteen editions were published during his lifetime and half a million copies sold, not to mention the translations of the book into a dozen languages. James died on Saturday, 1 October 1859, at his home in Edgbaston, and was buried six days later in a vault before the pulpit in Carrs Lane Chapel, having secured special permission for this from the Home Office.

His son, Thomas Smith James (1809–1874), was a lawyer in Birmingham. In addition to editing his father's works, he published The history of the litigation and legislation respecting presbyterian chapels and charities in England and Ireland (1867). He died on 3 February 1874, having been twice married. R. Tudur Jones DNB