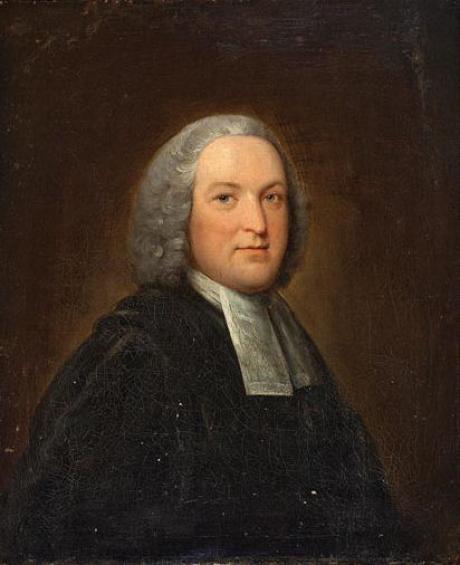 POWELL family, of Nanteos (and anciently of Llechwedd-dyrus ), near Aberystwyth . This family claims descent from Edwin ap Gronow of Tegeingl . Dafydd ap Philip ap Hywel is said to have been the first ‘ap Hywel (whence Powell) connected with Llechwedd-dyrus , the first seat of the family; his wife, according to Pen. MS. 156 (see West Wales Hist. Records , i), was daughter of John ap Edward of Nanteos . Their grandson, Sir THOMAS POWELL , Serjeant-at-law ( 1688 ), a Baron of the Exchequer , and ‘ Judge of the King's Bench in Kg. James the Second 's time’ ( Pen. MS. 156 ), m. Elizabeth , daughter and heiress of David Lloyd ( Gwyn ) of Aberbrwynen , and was the father of WILLIAM POWELL . The latter m. Avarina , daughter of Cornelius le Brun by his wife, Ann , daughter and co-heiress of John Jones of Nanteos . William Powell 's eldest son, THOMAS POWELL (d. 1752 ); was Member of Parliament for Cardigan borough , 1725-7 and 1729-30 , and for Cardigan county , 1721 , 1742-7 . His wife was Mary , grand-daughter of Sir John Frederick , lord mayor of London ( 1662 ). Thomas Powell gave £50 towards restoring Cardigan church in 1748 . He d. 16 Nov. 1752 , his estate devolving upon his only surviving brother,

Nanteos, is a large Georgian building,and lies in the Paith Valley, near Aberystwyth. The site has a long history of occupation: an earlier dwelling known as Neuadd Lawdden existed there for many centuries before Nanteos was built. The present mansion being built in 1739 by Colonel John Jones, who raised the Cardiganshire Militia in support of King Charles I during the Civil War, was the earliest known inhabitant of the Nanteos estate. He had three daughters, Mary, Anne and Elinor. Anne succeeded on her father’s death in 1666. Anne Jones of Nanteos married Cornelius Le Brun, who was born in Cologne, Germany. He came over to Wales to work on the lead and silver mines as a mining engineer. After making his fortune later became High Sheriff of Cardiganshire in 1674. When he died in 1705, Nanteos was left to his only issue, Averina (1675-1738). She married William Powell (1658-1738) of Llechwedd Dyrus, which was situated across the Paith Valley from Nanteos. William was the only son of Sir Thomas Powell K.C. who was knighted by King James II in 1688 and was one of the Judges of the King’s Bench.

Sir Thomas Powell K.C.
2 William and Averina Powell lived at Nanteos and had five children, Thomas, William, John, Anne and Elizabeth. When William died in 1738, the estate was passed on to his eldest son, Thomas who immediately began to build the present house at Nanteos. He was married Mary Frederick, granddaughter of Sir John Frederick, Lord Mayor of London in 1622 and it was her wealth that built Nanteos. Sadly, before completion of the mansion and while attending Parliament, Thomas died of an apoplectic fit in a London street. He left no legitimate issue but he did have an illegitimate son who lived at Nanteos, though not much is known about him. Thomas Powell 1699 - 1752 Nanteos was left to Thomas’ brother, the Reverend William Powell, who took over the estate in 1752. William carried on with the building of Nanteos, completing it in the late 1750s. His initials, W.P., can be seen on the lead drainpipe heads, dated 1757. He married Elizabeth Owen, eldest daughter of Athelstan Owen of Rhiwsaeson, Montgomeryshire. William was ordained deacon of Lincoln in 1731 and was made Doctor of Civil Law in 1763. He died in 1780 leaving a son, Thomas, and daughter, Corbetta Williamia, who married Colonel William Lewis of
Llanerchaeron, Cardiganshire.

Edward Penny,   (1714–1791), portrait, historical, and genre painter, was born at Knutsford, Cheshire, on 1 August 1714, and was baptized on 15 August, one of the twin elder sons of Robert Penny (1687–1738), surgeon, and Clare (1683–1760), daughter of William Trafford of Swythamley, Staffordshire. Many in his family had pursued a career in the church or as a surgeon, as did his twin brother, Henry. Penny, however, pursued his interest in painting and was sent to London to study with Thomas Hudson, whose influence is clearly evident in his early portraits. He subsequently studied in Rome with the portrait painter Marco Benefiale. About 1748 he returned to England and began to execute portraits in all formats from oval to full-length, a practice he continued throughout his career. Penny married on 4 September 1755 at St Anne's, Soho, London, Elizabeth (1719–1790), daughter of John Simmons of Millbank, Westminster, and widow of Richard Fortnam of St George's, Hanover Square, London.

Just as his contemporary Sir Joshua Reynolds imbued portraiture with the grand manner, Penny developed a highly original amalgam of history painting and genre, infusing historical events with the quotidian and genre scenes with the gravitas of more elevated subjects. The first works he exhibited at the Society of Artists in 1762 were a small whole length of a lady and a scene from Nicholas Rowe's Jane Shore. Penny exhibited almost yearly at the Society of Artists until 1768, sending primarily subject paintings and history paintings. In 1764 he exhibited an innovative modern dress depiction of the death of Wolfe, signed and dated 1763 (Ashmolean Museum, Oxford). Another version without the subsidiary figures is at Petworth House, Sussex. Subsequent to the success of Benjamin West's version, Penny's was engraved by Richard Houston in 1772. He also displayed a scene from Swift's description of a city shower (engraved Thomas Chambers, 1775; Museum of London), one of several works by Penny that were favourably recognized by Walpole. The next year he exhibited An Officer Relieving a Sick Soldier (Ashmolean Museum, Oxford) which Walpole noted as depicting Lord Granby. The theme of charity would become one of the most prominent in his work. Penny became the vice-president of the Society of Artists in 1765, a position he held until his resignation from the society in 1768. He then became one of the founders of the Royal Academy and was appointed the first professor of painting.

At the first Royal Academy exhibition in 1769, Penny avoided the prohibition against quotation by exhibiting a painting with the following title: ‘I saw a smith with his hammer thus,/The whilst his iron did on the anvil cool,/With open mouth swallow a taylor's news.’ Shakespeare, King John (Tate collection, known as The Gossiping Blacksmith). Ostensibly a genre painting, the picture contained marked political overtones. It was engraved in 1771 by Richard Houston as The English Politicians and was quickly co-opted by the supporters of John Wilkes. A print based on Penny's painting was published in the Oxford Magazine in 1771 with the significant addition of a print of John Wilkes hanging on the back wall of the forge. Penny exhibited almost every year from 1769 to 1782. The India Office commissioned Lord Clive explaining to the nabob the situation of the invalids in India; at the same time showing him a deed whereby he relinquishes Meer Jaffier's legacy, five lacke of rupees, to the honourable East India Company, for the support of the military fund(Department of the Environment, Foreign and Commonwealth Office) which was sent to the Royal Academy in 1772.

Throughout his career Penny executed a number of paired pictures. Two were sent to the Royal Academy in 1774, The Profligate Punished by Neglect and Contempt and The Virtuous Comforted by Sympathy and Attention (Yale U. CBA). His 1776 Royal Academy entry returned to the theme of Jane Shore. He exhibited Jane Shore led to do penance at St. Pauls: the insolent in office, and pretenders to purity, by insulting the wretched, betray their own baseness (Birmingham City Museum and Art Gallery). The flat bright colours of the painting and planar composition depart from Penny's usual style. Given the radical nature of the composition, it is not surprising that the painting remained in the possession of his family until the middle of the twentieth century. Penny's compositional experimentations are also evident in a pair of paintings exhibited in 1780, A Boy Taken out of the Water, Drowned and ‘The boy by proper means recovered’: vide Dr. Franklin's sermon to the Humane Society, humanie nihil a me alienum—Ter., in which the principal action described in the title takes place in the background of the painting and the foreground depicts the reaction to the main events. The pair was engraved as Apparent Dissolution and Returning Animation by William Sedgwick in 1784 and by J. Corner and P. Audinet (in smaller versions).

Penny resigned his professorship of painting owing to ill health on 31 December 1781. In the final year of his exhibition at the Royal Academy, 1782, among the pictures he submitted were Widow Costard's cow and goods distrained for taxes, are redeemed by the generosity of Johnny Pearmain. Penny died at Chiswick, Middlesex, on 16 November 1791, and was buried with his wife, who had died on 30 April the preceding year, at Chessington, Surrey. Penny's lectures were bequeathed by his will to his nephew, the Ven. George Buckley Bower, archdeacon of Richmond. There is no record remaining of the lectures, although they were praised by his successor as professor of painting, James Barry.