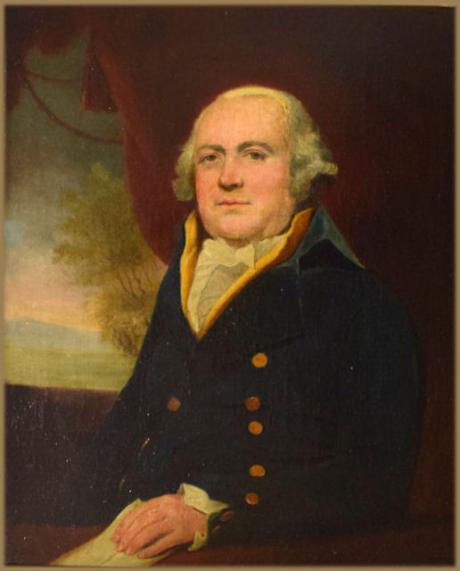 Robert Milligan (1746 – 21 May 1809) was a prominent English merchant and ship-owner, and was the driving force behind the construction of the West India Docks in London. Having grown up on his wealthy family's sugar plantations in Jamaica, Milligan left Jamaica in 1779 to establish himself in London,living in Hampstead for a period. Outraged at losses due to theft and delays at London's riverside wharves, Milligan headed a group of powerful businessmen who planned and built West India Docks, which was to have a monopoly on the import into London of West Indian produce such as sugar, rum and coffee for a period of 21 years. The Docks' foundation stone was laid in July 1800, when Milligan was Deputy Chairman of the West India Dock Company - his strong connections with the political establishment of the day were evident from those attending the ceremony, the stone being laid by Lord Chancellor Lord Loughborough and Prime Minister William Pitt the Younger as well as Company chairman George Hibbert and himself. The Docks officially opened just over two years later in August 1802. Milligan later also served as Chairman of the Company. The Docks were authorised by the West India Dock Act 1799 - the first parliamentary (as opposed to a municipal Act) for dock building. The Docks were constructed in two phases. The two northern-most docks were constructed between 1800 and 1802 (officially opened on 27 August 1802) for the West India Dock Company to a design by leading civil engineer William Jessop (John Rennie was a consultant; Thomas Morris (Liverpool's third dock engineer) was also involved), and were the first commercial wet docks in London. British Prime Minister William Pitt the Younger and Lord Chancellor Lord Loughborough attended the foundation stone ceremony on 12 July 1800; Milligan and Hibbert were also commemorated for their part in the ceremony. Following his death in May 1809, the Company commissioned a commemorative statue from sculptor Richard Westmacott. The statue currently stands in front of the Museum in Docklands on West India Quay, where it was originally erected (1813–1875) before being relocated to the nearby Main Gate (1875–1943), held in storage and later re-erected at the London Docks. It was re-erected at West India Quay in February 1997 by the London Docklands Development Corporation.Milligan has also had a local street named after him. Milligan Street is located near Westferry DLR station, just off Narrow Street, Limehouse. Robert Milligan was born at Dumfries on 19th August, 1746, the son of James Milligan. He married at Kingston, Surrey, 13th October, 1781, Jean Dunbar, the daughter of William Dunbar of Forres, Co. Elgin, by Jean daughter of William Davidson of Tulloch. Robert Milligan was the father of Thomas Hughan’s wife, Jean. Robert Milligan (c.1746-1809) After Robert died in 1809, he was honoured four years later by the erection of a beautiful statue of his likeness on the London docks, in recognition of the work and effort he had put into their growth and development. Robert Milligan had married fellow Scot Jean Dunbar on October 13, 1781, at Kingston, Surrey. The following year in London their first child, Jean Milligan, was born. She was to be followed by seven siblings-two sisters and five brothers- born between 1786 and 1799. In his later years Robert and his family enjoyed a very wealthy lifestyle centred around the grand family home, “Rosslyn”, near Hampstead. Approached from the London Road by an avenue of ‘fine and lofty trees’, Rosslyn was mainly formed from an old mansion called Shelford Lodge. It was purchased, redeveloped and renamed by Lord Rosslyn, and after his death in 1805 purchased by Robert Milligan. The Milligans also owned a beautiful country estate in Gloucestershire called Cotswold House, near Cerney, now known as Cotswold Park, where the Milligan sisters spent much of their lives, and later their brother William and his wife Caroline raised their family there. Robert Milligan died at Rosslyn,Hampstead, London on May 21, 1809. His wife Jean Dunbar Milligan survived him by eleven years. She died on January 14, 1820, having experienced in the time since her husband’s death the loss of two of her sons within months of each other...25 year old Henry Davidson Milligan in October of 1817 and his 29 year brother David in February of 1818.