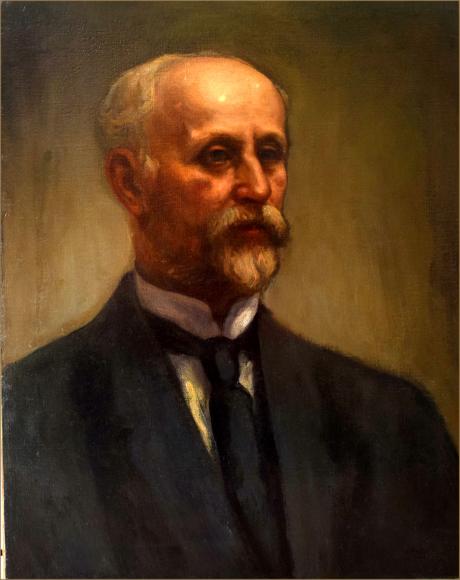 Isidore Konti (July 9, 1862 – January 11, 1938) was a Vienna-born (of Hungarian parents) sculptor. He began formal art studies at the age of 16 when he entered the Imperial Academy in Vienna, where he studied under Edmund von Hellmer. In 1886 he won a scholarship that allowed him to study in Rome for two years. While there he developed a love of Renaissance art that was to affect the nature of his mature sculpture. Upon returning to Austria, Konti worked as an architectural modeler.

In 1890, 1891 or 1892 (depending on the source) Konti moved, permanently as it turned out, to America, there going straight to Chicago, where he began working on sculptural decorations for the 1893 World's Columbian Exposition. When the work there was completed, he moved to New York City and commenced working as an assistant for fellow Austrian expatriate Karl Bitter. Konti's skills as a modeler kept him in much demand—for the 1900 Pan American Exposition in Buffalo, New York; for the 1904 Louisiana Purchase Exposition in St. Louis; and for the 1915 Panama Pacific Exposition in San Francisco. In 1906 he was elected into the National Academy of Design as an Associate member and became a full Academician in 1909.

Isidore Konti, was a highly skilled practitioner of the Beaux-Arts tradition. He lived in Yonkers from 1906 until his death, even moving his studio from New York City in 1914. Konti became a key member of the Yonkers cultural scene, co-founding the Yonkers Art Association, serving as commissioner of the Yonkers Museum of Science and Arts (Hudson River Museum), and producing four commissions for public statuary.

Konti earned an international reputation for works such as " the Genius of Immortality", with it sensuous and sinuous lines and tactile surfaces, was one of his most admired sculptures. The Metropolitan Museum of Art acquired a copy in 1916, the next year another was lent to the Detroit Institute of Art by one if its major donors. Overseas, the Italian government owned a copy. Like many of Konti’s subjects, the poetic title of the Genius is not directly narrative, but suggests a variety of allegorical associations.

In 1908, Isidore Konti, busy with several commissions, hired Paul Manship as an assistant. Though Manship, a herald of Art Deco Modernism, is better remembered, both artists achieved international renown in their day, when their statues adorned the lavishly landscaped gardens of Samuel Untermyer’s Greystone estate. Their sculptures bracket the long years spent by Untermyer landscaping and embellishing his elaborate Yonkers estate, a portion of which is now preserved as a public park.

Samuel Untermyer’s mansion, Greystone, is Yonkers grandest “lost” house, originally built in the 1860s for hat manufacturer John Waring. The second owner was former New York governor Samuel Tilden, who retired to Yonkers after losing the 1876 Presidential election to Rutherford Hayes. Untermyer (1858-1940) purchased Greystone in 1899. A graduate of Columbia Law School and a moderate Zionist, he is best known for his trust-busting activities and for his early and vociferous opposition to Hitler.

Isidore Konti (1862-1938) was born in Austria, but came to the United States in his early thirties and from about 1893 until the turn of the century worked in Karl Bitter's studio (having likely met Bitter while they were both working in Chicago for the World's Columbian Exposition). Konti would become an important figure in the Yonkers art community, achieving prominence primarily through architectural and memorial commissions, including works for the Pan-American Building in Washington, DC, friezes for the renowned Gainsborough Studio Building in New York City, statues of Justinian and Alfred the Great at the county courthouse in Cleveland, and memorial fountains in New Orleans. In addition to contributing works for the 1893 World's Fair in Chicago, Konti also executed important sculptures for the World's Fairs in Buffalo (1900), St. Louis (1904) and San Francisco (1915). Depicted above is the Main Building of the U.S. Government Group from the Buffalo Fair; Konti's monumental sculpture, The Despotic Age is at the far right. (Photo: C. D. Arnold, Official Views of Pan-American Exposition, scanned by Dave Pape, Wikimedia Commons)

The BrookIn 1906, the Untermyers commissioned Konti to sculpt The Brook, a marble fountain figure on a pedestal with putti and swans (right, shown at Greystone). The model had first been executed in plaster for the 1902 National Sculpture Society Exhibition held at Madison Square Garden, where it was widely admired, not the least of which by Untermyer. Not long after the commission was completed, Konti moved with his family from Manhattan to Yonkers, having been inspired by Greystone's magnificent landscape.
(Photo: A.B. Bogart, reproduced in The Sculpture of Isidore Konti, 1862-1938, exhibition catalogue, Hudson River Museum, 1975)

Isidore Konti also happened to be Paul Manship's mentor at the time that Konti produced The Brook for Greystone. Manship (1885-1966), then a burgeoning artist, worked in Konti's studio for a couple of years during which the two formed a lasting friendship. It is unclear whether Konti had anything to do with Manship's later much-celebrated commissions for Greystone, though if nothing else, Konti's 1906 fountain would have made Manship aware of Greystone and Untermyer. In 1909 Manship won the coveted Prix de Rome and spent the next three years there. Upon Manship's return to New York, he established a friendship with William Welles Bosworth (1869-1966), Untermyer's landscape architect. Their friendship, along with the Konti connection (presumedly), led to Manship's first commission at Greystone in 1917.

Like many sculptor of that epoch Konti created architectural sculpture. His works in this arena include:

Born on October 29,  1893 in Philadelphia, Pennsylvania, he was a son of Henry and Margaret Rothenburgh, German immigrants. Henry was working as a "Sugar Boiler" in 1900 in Philadelphia and as a "Foreman, Sugar Refinery" in Yonkers, New York in 1910.

Otto Rothenburgh studied at the Art Student's League and was living in Yonkers, New York, when he completed his WWI draft registration card.  Otto applied for a passport in 1921 stating that he was an artist and traveling to Holland to study and visit relatives, and also traveling to study in the British Isles, Italy, Belgium, Switzerland, France, and Gibraltar.  This passport was later canceled. He applied for a new passport in 1925 . and was a prolific genre artist and scenery painter.  During his career, he produced more than four-hundred paintings including work that he did in Mexico in 1934 when he moved to Taxco. He was associated with Joseph Urban, eminent stage designer, and with Salvadore Dali. He also painted scenery for the Metropolitan Opera and the Ziegfield Follies. He exhibited at the Society of Independent Artists and the Pennsylvania Academy of Fine Arts.