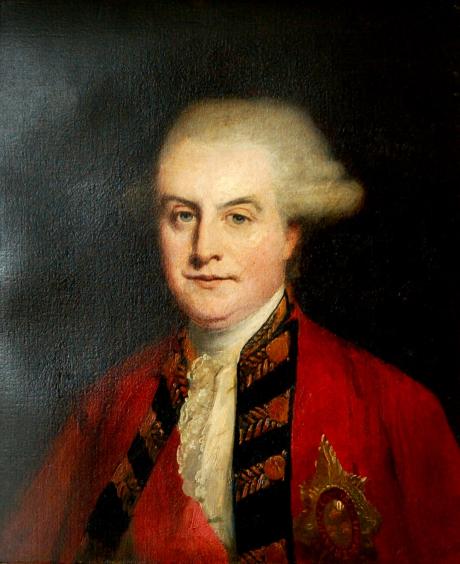 Archibald Campbell  appointed to the order of the Bath 30 September 1785. Hickey was in India from 1784-1791 and Lived In Madras and was there in 1789 at the same time as Campbell, which was infact his last year. It is likely that this Portrait was painted to commemorate Campbells appintment as Governor Of Madras   in 1786 as well as his appointment to the Order of Bath in 1785.

Campbell, Sir Archibald (1739–1791), army officer and colonial governor, was born on 21 August 1739 and baptized on 25 August at Inveraray, Argyll, the second son of James Campbell (1706–1760), commissary of the western isles of Scotland and chamberlain to the duke of Argyll, and his wife, Elizabeth Fisher of Durren. He was educated at Glasgow University and at the Royal Military Academy, Woolwich. Having been commissioned in the corps of engineers of the king's army in 1758, during the Seven Years' War he served in the expeditions to the coast of France and the West Indies, at Guadeloupe, Dominica, Martinique, St Lucia, and Grenada (not, as many accounts have it, at Quebec). He was afterwards approached by Venice and by Portugal to join their services. In 1768 he was seconded to the East India Company as chief engineer in Bengal, where he reported on the Bombay fortifications, reorganized the defences of Fort William, and supervised the dismantling of the French fort at Chandernagore under the terms of the peace treaty. As a private venture, with Colonel Henry Watson, he built the docks and shipyards at Kidderpore, south of Fort William (he sold his interest to Watson shortly after returning to Britain in 1773), and made a fortune trading in silk.

In 1773 Campbell purchased Inverneill in Argyll; nearby Knap and Taynish were added to his estate by the end of the decade. He was elected MP for Stirling burghs in 1774, at great expense, and represented that constituency between 1774 and 1780, and again from 1789 until 1791. James Boswell acted as his legal adviser. Campbell was a supporter of the administration, but appears to have been little involved in politics.

In November 1775 Campbell raised the 71st regiment of highlanders, and with it sailed from Greenock to Boston in May 1776. He arrived in Boston harbour in June, unaware that the city had already fallen to the Americans. He surrendered and was imprisoned in Concord gaol in degrading conditions in retaliation for British ill treatment of captured American officers; strong protests to George Washington improved his conditions, but he remained a prisoner until he was exchanged for Ethan Allan and six other men in May 1778. He resumed his command, and led eight battalions of infantry to reconquer Georgia. After landing at Savannah at the end of December 1778 he achieved his objectives within three months. He then resigned the command to General Augustine Prevost and returned to Britain and popular acclaim.

On 7 July 1779 Campbell married Amelia (d. 1813), the daughter of the portraitist Allan Ramsay. They had no children. In 1780 he was appointed lieutenant-governor of Jamaica, with the rank of brigadier-general and the command of the British troops on the island, which he refused to allow the governor, John Dalling, to use in expeditions against Nicaragua and Curaçao. Dalling was recalled in 1781 and Campbell was appointed governor of Jamaica in his place. He successfully reorganized the island's defences. He was appointed general of the line in November 1783 and returned to Britain in August 1784. On 30 September 1785 he was appointed KB for his services. Friendship with Henry Dundas led to his appointment as governor of Madras in the same year, and he arrived in India in April 1786. In addition to being one of the most highly regarded military engineers of his time, Campbell was also an able administrator; he devoted much energy to the civil institutions of Madras, and he concluded a treaty with the nawab of Arcot for the settlement of the nawab's debts. This last was strongly criticized by the directors of the East India Company, and, offended and in poor health, Campbell resigned in June 1789.

Campbell did not long survive his return to Scotland: he caught a severe cold in 1790, and, although he recuperated in Bath, he died at his house in Upper Grosvenor Street, London, on 31 March 1791. He was buried in Westminster Abbey, leaving his fortune and Inverneill estates to his elder brother, Sir James Campbell (1737–1805). His younger brother, Duncan Campbell (1742–1822), succeeded him at Taynish, chronicled the family history, and wrote the manuscript account of Sir Archibald's career on which this life is largely based.

Thomas Hickey, (1741–1824), portrait painter and traveller, was born in Dublin in May 1741, the second son of Noah Hickey, a confectioner in Capel Street there. Between 1753 and 1756 he studied at the Royal Dublin Society Schools, where he won several prizes. His earliest portraits, chalk drawings of 1758 and 1759, are in the National Gallery of Ireland, Dublin. In April 1762 George Dance reported him in Rome ‘a very agreeable young man’ (Ingamells, 496) who had been recommended by one Captain Smith and William Dance (a miniaturist, brother of George). He was still there in April 1765, living in the strada Felice, and in May 1765 he visited Naples. He was said to have been one of those artists who paid court to Angelica Kauffman (who was in Rome from January 1763 to June 1765). In May 1767 he was back in Dublin, where he exhibited with the Society of Artists during 1768–70, before moving to London. He exhibited portraits at the Royal Academy (1772–6), and in 1775 his sitters included the duke of Cumberland and the actress Mrs Abington (Garrick Club, London). In December 1776 he moved to Bath for two years, where he painted two full-length portraits of masters of ceremonies, William Dawson and William Brereton (both engraved).

On 26 March 1780 Hickey received permission from the East India Company to go to India, and on 6 July Sir Joshua Reynolds wrote on his behalf to Warren Hastings, recommending ‘a very ingenious young painter’ who wished ‘to make a trial of his own abilities’ (Archer, 206). Hickey sailed from Portsmouth on 27 July but the convoy of five vessels was captured by the French and Spanish on 9 August. Hickey was taken to Cadiz but released as a non-combatant; he made his way to Lisbon where, for three years, he established a profitable practice as a portrait painter. In 1782 he was living in ‘four handsome rooms on the ground floor of Mrs Williams' hotel’ (Memoirs, 2.386). The elegant Girl Leaning on a Piano in the Tate collection belongs to this period. At the close of 1783 he left Lisbon and arrived at Calcutta in March 1784.

For three years Hickey had considerable success, living in ‘a large handsome house in the most fashionable part’ (Memoirs, 3.202) and enjoying the patronage of the attorney William Hickey (who was not related). The Indian Lady of 1787 (National Gallery of Ireland, Dublin), possibly Jemdanee, William Hickey's bibi, remains one of his finest pictures. Late in 1786 the painter John Zoffany returned to Calcutta, and Hickey's practice declined. He turned to compiling a History of Ancient Painting and Sculpture, the first, and only, volume of which was published in 1788; future volumes, the Calcutta Chronicle announced in February 1789, would have to await further research by the author in Europe. From February 1789 Hickey had some success in Madras, but he was back in Calcutta by 1790. In January 1791 he sailed home.

Hickey again encountered a lack of business, although he was able to exhibit the portrait of a nobleman at the Royal Academy in 1792. He was preparing to return to India in February when he received an invitation from Lord Macartney, whose portrait he had previously painted, to accompany him on a diplomatic mission to Peking (Beijing). The mission lasted from September 1792 to September 1794, during which Hickey entertained Macartney with shrewd and clever conversation, but devoted more time to writing than to drawing or painting.

On his return, Hickey spent four years in London and Dublin, without any marked success. Early in 1798 he returned for the last time to India with his two daughters (but nothing is recorded of his marriage). They had left London by 23 February 1798 and arrived at Madras later in the year. The Anglo-Mysore wars, establishing British ascendancy in southern India, were then in their final throes; in May 1799 Tipu Sultan was slain and Seringapatam was taken. Hickey found himself the only portrait painter on the spot and his services were urgently sought. He made chalk drawings of fifty-five British officers (Stratfield Saye House, Hampshire) which were much admired, and he intended to paint a series of large history paintings describing the last Mysore war, which never materialized. Portraiture took up all his time: in 1799 he painted a full-length portrait of Lord Mornington, the British supreme commander, for the Exchange at Madras (Apsley House, London); a series of sixteen Indian dignitaries for Government House, Calcutta, was completed in 1805, and there were many portraits of British inhabitants, of which the full-length of William Kirkpatrick (National Gallery of Ireland, Dublin) was perhaps the most accomplished.

In 1804, when a history of the East India Company was being contemplated, Hickey unsuccessfully proposed himself as the company's historical and portrait painter with responsibility for describing the different Indian inhabitants and their surroundings. In May 1807 he moved to Calcutta where he stayed five years, although only one portrait has been identified from this period. In December 1812 he was invited back to Madras, where he settled with his elder daughter. He was much employed in repairing paintings and few of his portraits survive from these years. The last was of the celebrated Indologist the Abbé Dubois in ‘Bramanical costume’, painted in 1823 (Madras Literary Society). Hickey died at Madras in May 1824 at the age of eighty-three.

Throughout his restless career Hickey never quite attained eminence as a painter, and he was frequently concerned over his prospects. Though his drawings could be vigorous, his paintings, particularly the whole-length presentation pieces, tended to be wooden; ‘combination & general effect are the great difficulties’, wrote Lord Sydenham in 1800, ‘and we are yet to know whether Mr Hickey possesses these requisites’ (Archer, 221). It is, however, apparent that Hickey's personal charm and erudition, quite apart from his extensive experience of the world, considerably helped his social progress.  DNB