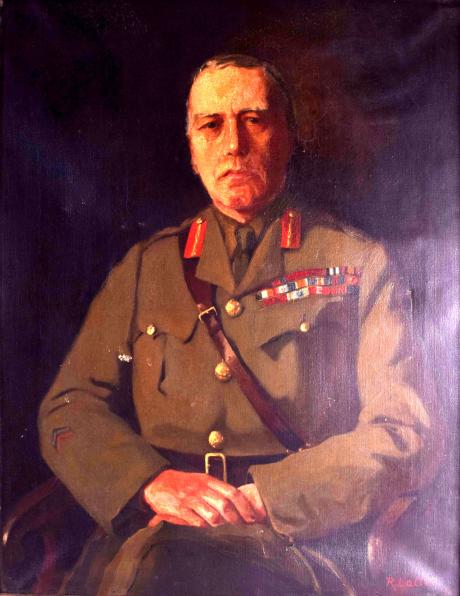 Sir (Cecil Frederick) Nevil, Macready, first baronet (1862–1946), army officer, was born on 7 May 1862 at 6 Wellington Square, Cheltenham, youngest son of the actor William Charles Macready (1793–1873) and his second wife, Cecile Louise Frederica Spencer (d. 1908), a granddaughter of Sir William Beechey the painter. Nevil, as he was always known, was Cecile's only child, and only one son and one daughter from his father's first marriage survived infancy.

Macready was brought up in artistic and literary circles. In his memoirs he adjudged himself ‘far too lazy’ to follow a career in painting or drawing (Macready, 1.14), and his father resolutely opposed his going on the stage. After a series of schools he went to the Royal Military College, Sandhurst; and in October 1881 he was commissioned into the Gordon Highlanders. He took part in the Egyptian campaign of 1882, including the battle of Tell al-Kebir. In the summer of 1884 he was appointed staff lieutenant of military police and garrison adjutant at Alexandria, thus establishing a career pattern which he was to follow for most of his professional life: adjutancy, staff duties, and police work. ‘It was not a bad thing’, recalled Macready ‘to have Staff experience when young … The great thing is always to have a ready answer on one's tongue. Even if it is not absolutely correct, there are many generals who will be none the wiser’ (Macready, 1.69–70). In 1886 he married Sophia Geraldine Atkin (d. 1931) from a co. Cork family. They had two daughters and one son.

After some five years as a military policeman Macready rejoined his regiment early in 1890 and served in Ceylon and India for two years. In 1892, as a captain, he was transferred to Dublin and in 1894 he became adjutant of a volunteer battalion of the regiment based in Aberdeenshire. In 1899 he returned to the 2nd battalion in India, which in September was sent to South Africa.

Macready, promoted major in 1899, saw active service during the South African War, including the defence of Ladysmith, where he was one of the besieged garrison from October 1899 to February 1900. Having been promoted lieutenant-colonel, he was in June 1901 selected to head a commission investigating cattle-raiding in Zululand. Following this he served in a series of staff jobs, including assistant provost-marshal at Port Elizabeth and assistant adjutant-general and chief staff officer of Cape Colony. For his work in South Africa he was twice mentioned in dispatches. He was promoted colonel in 1903.

In 1907 Macready became assistant adjutant-general at the War Office, in the directorate of personal services which was, among other matters, responsible for discipline and the use of troops in aid of the civil power. For a year from May 1909 he commanded the 2nd infantry brigade at Aldershot, but he returned to the War Office in 1910 as director of personal services. The same year he was promoted major-general. His position made him a crucial figure in the deployment of troops during a series of serious labour disputes in Great Britain and anticipated civil disturbance in Ireland. He earned the confidence of the government as a ‘safe pair of hands’ in circumstances where passions ran high and over-hasty action could have disastrous consequences. He certainly had liberal political sympathies. Writing in 1930 his close colleague Wyndham Childs recalled that they both ‘held views which nowadays I suppose would be called sane, though at that time they were thought ultra-democratic’ (Childs, 83). In particular, Macready conceded the right to strike and (unlike many fellow officers) favoured Irish home rule.

In November 1910 Macready was sent to command troops in support of police dealing with possible disorders arising from a miners' strike. Although some rioting occurred, especially in the Tonypandy valley, his insistence that the military forces remained subordinate to the police and, perhaps more importantly (though of questionable legality), that they served under the direct authority of the Home Office, rather than taking direction from sometimes alarmist local magistrates, ensured that the use of soldiers, both then and during the 1912 national coal strike, did not inflame the situation.

A potentially much more serious military commitment arose in Ireland in 1912–14, where unionist and nationalist paramilitary formations raised fears of a civil conflict over the issue of home rule. In the aftermath of the Curragh incident of March 1914, Macready was nominated ‘military governor’ in Belfast in the event of serious disorder, but the outbreak of war in August 1914 temporarily lifted the threat of civil war in Ireland as both unionists and nationalists united against a perceived common foreign enemy.

Macready went to France as adjutant-general of the British expeditionary force. Among the matters under his charge were the burial of the dead and the recording of graves, and he was responsible for appointing Fabian Ware to head a new graves registration and inquiries organization, which provided the basis for the Imperial (later Commonwealth) War Graves Commission. In February 1916 Macready was recalled to the War Office as adjutant-general to the forces, and for most of the rest of the war he tackled the ever-increasing difficulty of keeping up the strength of the armies in the field. He was a powerful proponent of the ‘scientific’ deployment of the nation's manpower resources and encouraged the use of female labour to replace male wherever possible.

In August 1918 Macready, who was promoted full general the same year, reluctantly accepted the post of commissioner of the Metropolitan Police, after the police had gone on strike over pay and the recognition of a trade union. He brought the men back to work by granting a pay rise and promising machinery for collective representation. When a minority of police went on strike again in August 1919 Macready summarily dismissed the strikers and restored discipline to the force.

In spring 1920, despite averring privately that he loathed Ireland and its people ‘with a depth deeper than the sea and more violent than that which I feel against the Boche’, Macready accepted the command of the army in Ireland (Townshend, 20). It was, he recorded in his memoirs, only a sense of loyalty to his old chief Lord French (now lord lieutenant in Ireland) that persuaded him to take the job. The move from London, however, was sweetened by £5000 ‘disturbance allowance’. He was in many respects the ideal candidate for a position which required high administrative powers, experience of military aid to the civil power, and a degree of political finesse. He immediately injected a note of morale-boosting dynamism into the Irish command and reassessed security policy generally, which up to this point had limped along with no very clear direction. He secured additional troops and much needed technical support, including motor transport and armoured cars. But the possibility of his succeeding in defeating the growing Irish challenge was fatally compromised by his refusal to accept charge of the Irish police alongside his military command. While declining this responsibility may personally have been a wise political move, in security terms it made no sense at all. Macready also acquiesced in the reinforcement of the Royal Irish Constabulary with a militarized auxiliary division whose draconian (and not always legal) methods did much finally to alienate Irish nationalist opinion from the British administration in Ireland.

Macready's advice to Lloyd George in the early summer of 1921 that the army in Ireland scarcely had the resources for a sustained campaign against the IRA contributed to the truce of July 1921 and the subsequent treaty which led to the withdrawal of the British administration from what became known as the Irish Free State. He saw to it that the evacuation of troops was conducted without untoward incident. In June 1922, following the assassination of his old friend Sir Henry Wilson, he deliberately delayed implementing orders from London to reduce the republican-occupied Four Courts in Dublin, an action which would undoubtedly have plunged Ireland into a grave crisis. Thus his cool good sense was sustained to the end.

Known as Make-Ready—a nickname echoing the correct pronunciation of his surname—Macready was, in the words of H. A. L. Fisher, ‘a man of cool head, good judgement, and, with a dry manner, tact and humour’ (Fisher to Lloyd George, 6 July 1916, Lloyd George papers, E/2/23/2). He was a very able military staff officer who expertly fielded some of the most politically sensitive military duties of the time. His reputation, however, is chiefly sustained by his own memoirs, Annals of an Active Life, after the publication of which in 1924 he destroyed his diary and other personal papers.

Ruth Latter was a lower, landscape and portrait painter, she lived in 44 York mansions Battersea, London, she exhibited between 1906 and 1937.