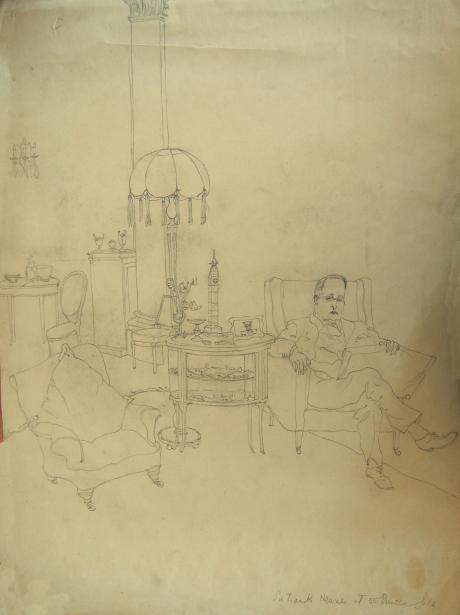 Frank Hillyard Newnes was born in Manchester, the son of George Newnes, the newspaper publisher and Liberal MP first for Newmarket and later for Swansea. His mother was Priscilla Newnes (née Hillyard) the daughter of the Reverend James Hillyard. He had an older brother who died aged eight years and whose death was said to have devastated his father. Newnes was educated privately before attending Clare College, Cambridge where he graduated with MA and LL.B. degrees in 1897.

In 1913 Newnes married Emmeline Augusta Louisa (Lena), the daughter of the late Sir Albert de Rutzen, who had held the office of Chief Metropolitan Magistrate at Bow Street. Lena Newnes became a well known society hostess and philanthropist, raising thousands of pounds for various charitable and educational causes. She was a Dame of Grace of the Order of St John of Jerusalem. She died in 1939. Newnes married again in 1946. His second wife was Dorothy (née Darlot), the widow of Stephen Delmar-Morgan, who was originally from Perth, Western Australia. There were no children from either marriage.

On leaving university in 1897, Newnes followed his father into his publishing business, eventually becoming President of George Newnes Ltd. He also became Chairman of Country Life, Ltd and a director of other companies in the publishing trade, including the Westminster Gazette, the Liberal supporting newspaper founded by his father. The paper was dubbed the ‘pea-green incorruptible’ – Mr Gladstone having personally approved its green colour. Newnes also had other commercial and investment interests and served on the boards of the Norwich Union Fire Insurance Society and Norwich Union Life Insurance Society. He also served as a director of City & Commercial Investment Trusts Ltd and Redeemable Securities Trust Ltd and was Chairman of Associated Weavers, Ltd and Armoride Ltd. In addition to his business career, Newnes was called to the Bar by the Inner Temple in 1898, although it is not recorded that he ever practiced the law.

Newnes also followed his father in his political persuasions. A sometime member of the National Liberal Council,he was elected Liberal MP for Bassetlaw in north Nottinghamshire at the 1906 general election, gaining the seat from the Conservatives by a majority of 531 votes. However the seat returned to the Tories at the January 1910 election by the even narrower margin of 341 votes. He did not stand for Parliament again. However his father died in 1910 and Newnes inherited the baronetcy.

In 1915, Newnes was commissioned a sub-lieutenant in the Royal Naval Volunteer Reserve . Two years later he transferred to the army and attained the rank of Captain in the 12th Battalion, the Bedfordshire and Hertfordshire Regiment. Newnes’ main non-political interests were in public health matters and he also understandably busied himself with press related charities. He was a member of the Voluntary Hospitals Committee for London, a member of the management committees of the Royal Free Hospital and its Medical School and also served as Chairman of the Post-Graduate Institute of Dental Surgery and of the Eastman Dental Hospital. In his publishing charity work, Newnes became President of the Printers Pension Corporation and was a vice-president of the Periodical Proprietors Association. In 1949 he was appointed a Commander of the Order of St John.