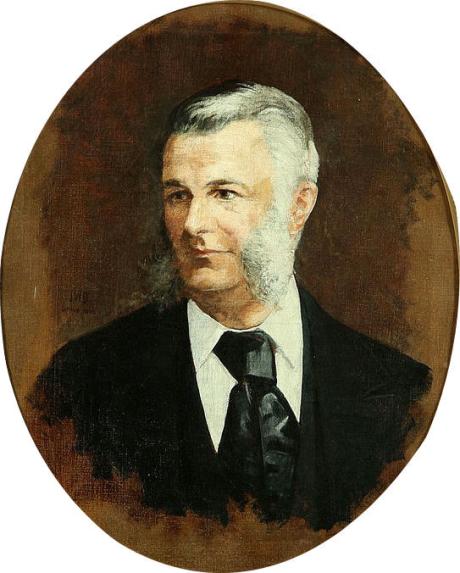 signed with monogram and inscribed and dated "London 1886"

Abel, Sir Frederick Augustus, first baronet (1827–1902), chemist and explosives expert, was born on 17 July 1827 at Woolwich, the eldest son of Johann Leopold Abel (1795–1871), a music master in Kennington, and his wife, Louisa (d. 1864), daughter of Martin Hopkins of Walworth. His paternal grandfather, August Christian Andreas Abel (b. 1751), was court miniature painter to the grand duke of Mecklenburg-Schwerin.

Abel was attracted to a scientific career by a visit at the age of fourteen to an uncle in Hamburg, A. J. Abel, a mineralogist and pupil of Berzelius. After a course of chemistry under Dr Ryan at the Royal Polytechnic Institution, he entered the Royal College of Chemistry, founded in October 1845 under A. W. Hofmann, as one of the twenty-six original students. Next year he became an assistant, holding the position for five years. In 1851 he was appointed demonstrator of chemistry at St Bartholomew's Hospital to Dr John Stenhouse, and in March 1852 lecturer on chemistry at the Royal Military Academy at Woolwich in succession to Faraday. With Charles Loudon Bloxam (d. 1887), his assistant and successor there, he published a useful Handbook of Chemistry, Theoretical, Practical, and Technical (1854; 2nd edn, 1858).

At Woolwich, Abel was the chief official authority on all matters connected with explosives. The transformation of arms and ammunition which took place during his tenure necessarily occupied the greater part of his scientific career, though almost every branch of technical science was enriched by his labours. The supersession of black by ‘smokeless’ powder was due to his researches on gun cotton, founded on the attempts of Baron von Lenk to utilize this explosive in 1862. He developed the process of reducing gun cotton to a fine pulp, which enabled it to be worked and stored without danger; the results were published as Gun Cotton, a Lecture (1874) and The Modern History of Gunpowder (1879). Another important research, undertaken jointly with Andrew Noble, determined the nature of the chemical changes produced on firing explosives. This work, carried out at great personal risk, threw new light on the theory of explosives. The conclusions were published in various papers and lectures from 1871 to 1880: On Explosive Agents(1871), and Researches on Explosives with Capt. Noble (1875, 1880).

The explosion in Seaham colliery in 1881 led to the appointment of a royal commission on accidents in coal mines on which Abel served. This in turn prompted his researches on dangerous dusts (1882), in which he investigated the part played by dust in bringing about an explosion. In other directions he reached equally important results. As an expert in petroleum he devised the Abel open-test, with a flashpoint of 100 °F, legalized in 1868, which was superseded in 1879 by the Abel close-test, with a flashpoint of 73 °F. He also carried out many researches into the composition of alloyed metals with reference to their physical properties.

Abel's last piece of work, carried out with James Dewar, was the invention of cordite in 1889. The use of high explosives abroad forced the British government to search for a better material than gun cotton, and a committee was appointed in 1888, under Abel's presidency, to examine all the modern high explosives. None of them was exactly suitable to service requirements, and their inventors would not make the necessary modifications. Abel and Dewar therefore devised and patented a compound of gun cotton and nitroglycerine and assigned it to the secretary of war in 1890. The wording of the patent application was crucial, for it allowed them to circumvent other patents held in the fields of nitroglycerine and nitrocotton explosives, principally those of Alfred Nobel and his company. The selection of gun cotton rather than soluble nitrocellulose seemed to many to have been made purposely to take advantage of a gap left in Nobel's earlier patent for ballistite. Nobel decided to sue when he learned that Abel and Dewar had, early in 1889, seen full specifications of his invention in their capacity as members of the government's explosives committee. The cordite case lasted three years (1892–5); Nobel lost, having no case in law, but many believed that he had been harshly treated.

Abel contributed over sixty-five papers to scientific publications, and some important articles to the ninth edition of the Encyclopaedia Britannica. His remarkable powers of organization and his official position as scientific adviser to the government gave him a prominent role in the scientific world. He was elected FRS in 1860, and received the royal medal in 1887. He was successively president of the Chemical Society (1875–7), the Institute of Chemistry (1881–2), the Society of Chemical Industry (1883), and the Institution of Electrical Engineers. He was president of the Iron and Steel Institute in 1891, and was awarded the Bessemer gold medal in 1897. He acted as chairman of the Society of Arts (1883–4) and received the Albert medal in 1891. The Telford medal was bestowed on him by the Institution of Civil Engineers in 1879.

He presided over the chemistry section of the British Association in 1877, and as president of the association in 1890 he gave an address on recent practical applications of science. When the foundation of the Imperial Institute was decided on in 1887, Abel was appointed organizing secretary, remaining its honorary secretary and director from its opening in 1893 until it was transferred to the Board of Trade in 1901. He was made CB in 1877, was knighted in 1883, became KCB in 1891, a baronet in 1893, and GCVO in 1901; he received honorary degrees of DCL (Oxford, 1883) and DSc (Cambridge, 1888). He combined with his scientific capacity high accomplishments as a musician. Abel died of cardiac failure at his residence, 2 Whitehall Court, London, on 6 September 1902 and was buried at Nunhead cemetery on 11 September.

John Ward Dunsmore, born in Riley, Butler County, Ohio, February 29, 1856, studied with Thomas Noble at the McMicken School of Design in Cincinnati, Ohio. He was then in Paris from 1875 to 1879 studying at the Petite Ecole with Aimee Millet and privately with Thomas Couture. His first appearance in the National Academy exhibition was in 1879. When he returned to America it was to settle in Boston. While there he was awarded a medal from the Massachusetts Charitable Mechanics Association in 1881. However, after about five years in Boston he returned to Europe, where he worked in Paris and England, executing a series of paintings on the life and times of French King Louis IV. He exhibited in the Paris Salon in 1878 and also at the Suffolk Street Gallery in London. In 1888, Dunsmore was in Detroit to assume the post of director of the new Detroit Museum (now the Detroit institute of Arts). Two years later he became director of the Detroit School of Arts, a position he retained until 1894. He then returned to Cincinnati, Ohio. By 1902 Dunsmore had settled in New York and begun researching the American Revolutionary War, eventually becoming an authority on the subject. He frequently exhibited these subjects in Academy annual exhibitions, in which he was consistently represented from 1902 until 1941. He was also represented at the Chicago World’s Fair in 1893. Dunsmore was a member of the American Watercolor Society, the American Fine Arts Society, the Artists Fund Society, the Salmagundi Club, and the American Artists Professional League of which he was a founding member. While in Detroit he was also president of the Rembrandt Etching Club. The artist died at Dover, New Jersey on October 7, 1945. Written and submitted by Edward Bentley, Art Historian, Lansing, Michigan Sources: Dearinger, David Bernard, National Academy of Design. Paintings and Sculpture in the Collection of the National Academy of Design. Hudson Hills, 2004. Gibson, Arthur Hopkin. Artists of Early Michigan. Wayne State University Press, 1975.