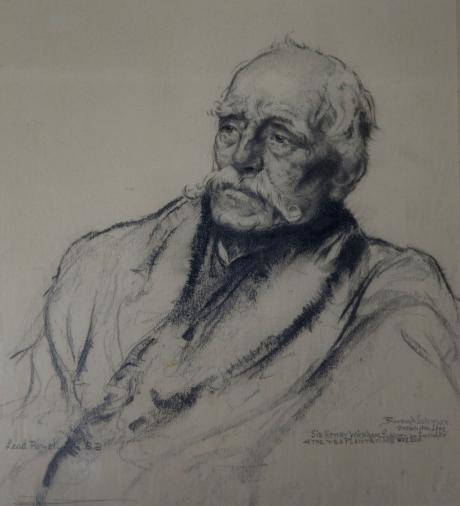 Sir Henry Alexander Wickham, (1846–1928), plant collector and planter, was born on 29 May 1846, the son of Henry Wickham, solicitor. His father died when he was four, and he was raised by his mother. He was talented at drawing and undertook some training as an artist.

At twenty Wickham went to Central America, where for three years he engaged in the trade in bird plumage. He returned to England, but a year later was in Colombia and Venezuela dealing in rubber. He made a journey up the Orinoco and down the Rio Negro and Amazon that ended at Santarém in Pará, where he was befriended by some English residents and American Confederate exiles. After returning to England again in 1871, on 29 May he married Violet Cave Carter, daughter of W. H. J. Carter, a Regent Street bookseller who published Wickham's account of his journey. With his wife, his mother, brother, sister, and brother-in-law he sailed out to Santarém to commence life as a sugar and tobacco planter, perhaps financed by his father-in-law.

In 1872 Wickham wrote offering his services as a collector to Sir Joseph Hooker at the Royal Botanic Gardens at Kew. In May 1873 Hooker was approached by Clements Markham of the India Office for assistance in introducing the Pará rubber tree Hevea Brasiliensis into India, and thought of Wickham. Encouraged to obtain as many seeds as possible at £10 per 1000, Wickham seized the opportunity not only to gather but to accompany the seeds to England and escape a life that had become unsustainable. His mother and sister had died at Santarém; his plantation was a failure. In desperate straits it is likely that his and his wife's passages aboard the Amazonas were obtained on a promissory note. The seeds had been collected probably in great haste from stands near Boim on the Rio Tapajós, not far from Santarém, in April and May 1876.

To the Brazilian customs Wickham declared his baskets to contain 'exceedingly delicate botanical specimens specially designated for delivery to Her Britannic Majesty's own Royal Gardens'. Though the very size of the shipment might have caused the local Brazilian officials to pause or seek authorization, the deception was more of a precaution. No one on the Amazon at the time could have foreseen that the massive industry about them might one day be eclipsed, or that Hevea could be successfully cultivated elsewhere. There was no Brazilian regulation to prevent the export of seed. Wickham later dramatized the deed as a tale of successful smuggling, making the arrival of the Amazonas providential—it was actually on a scheduled voyage to Liverpool—and adding a threatening Brazilian gunboat. One thing is certain—that speed had been essential to success, as the oily rubber seeds have brief viability.

Wickham arrived in England with the cargo of 70,000 seeds on 14 June 1876. These were planted in specially prepared beds at Kew, and by August fewer than 4000 had germinated. He received £743 from the India Office and sought a further commission to take the plants to Ceylon. When a response was delayed he decided to take his fee and a quantity of coffee seedlings obtained at Kew and emigrate to Queensland. Acquiring land on the Herbert River north of Townsville he decided on tobacco cultivation. Dogged yet again by misfortune as well as mismanagement he was forced to abandon this venture with little more than the fare home remaining.

In 1886 Wickham returned to Central America. In British Honduras he obtained work initially as an inspector of forests before proceeding to establish a plantation on the Temash River with bananas and local Castilloa rubber. A dispute over his lease ended in another débâcle.

In 1895 Wickham turned again to the South Seas in British New Guinea and began by searching for latex-bearing trees and vines offered by its forests. In 1896 he took out a lease in the Conflict Islands, a small atoll of under 1800 acres, 80 miles east of Samarai, and over the next decade developed a coconut plantation.

Wickham had continued to correspond widely, to interest himself in plants that might prove of economic value, and to follow closely developments in the rubber industry and its technology. From 1906, when the success attending the development of rubber plantations in the Far East began to exceed all expectations, his occasional appearances in London received increasing attention from journalists. He was an adept self-publicist. In 1908 he published the embellished account of the 1876 exploit in a book on rubber cultivation and production that contained little that was essentially new. In 1911 he was fêted at an international rubber banquet, presented with 1000 guineas, and provided with an annuity for life by the Rubber Growers' Association and the Planters' Associations of Ceylon and Malaya. His receipts from gifts of money, shares, and other benefactions over subsequent years were substantial. He was able to reside permanently in London in Albion Street, Hyde Park, a frequent attender at meetings of the Royal Colonial Institute, lionized by the rubber companies and demonized by Brazilians. He received a knighthood in 1920. His fame had become international and his name everywhere associated with the rubber industry and the snatch of 1876.

That Wickham had played a crucial role cannot be disputed. It has been established that it was from Wickham's seeds alone that the entire south-east Asian rubber industry was built—though the brilliant work of Henry Ridley in Singapore in the development of the industry was in many ways much more significant. The escapade of 1876 was indeed decisive, but while it may have been undertaken furtively, it was neither illegal nor as remarkable at the time as subsequent events and Wickham's reconstructions were to make of it.

Wickham died on 27 September 1928 at 32 Newton Road, London. His eulogist in The Times described him as 'every inch a pioneer, broad-shouldered and heavily built with an extraordinary long wavy moustache, his physical strength … as great as his resolution'. His shortcomings aside, he remains a paradigm of the nineteenth-century British adventurer and individualist.

He studied at Slade and Herkomer's at Bushey, and subsequently became Professor of Fine Art at London University's Bedford College and Chelsea Polytechnic respectively.  He was a teacher of life painting and drawing at London School of Art and the Byam Shaw School. Married to the artist Esther GEORGE, by 1917 he lived at Westbourne Gardens, Hyde Park, London.

They both exhibited in the 1924 Show Day in St Ives, with Johnson showing several fine oils, charcoals and pencil studies. According to the St Ives Times, one was 'a busy scene on the Wharf in the fishing season, with girls packing the fish, and a cart loaded with barrels on its way.'  He also showed a portrait of Mr MATSUBAYASHI in Samurai costume, with a bright red background.

By the 1930s he was distinguished as a writer on techniques of drawing.

Ernest Borough-Johnson, the youngest of the three principal artists involved in the collaborative illustration of Tess of the D'Urbervilles, was born in December 1866, in Shropshire. Resident in Basingstoke after his time as a pupil at Bushey, Johnson (Graves gives the spelling "Johnston") was a country man suited by experience and temperament to his task here.

Between 1887 and 1892 he exhibited twelve paintings, eight at the Royal Academy, including Her Daily Bread(1887), Winchelsea, From Winchelsea, and Motherless (1889), Study of a Head, and Spring Blossom (1890). His most successful literary illustration was that of Henry Wadsworth Longfellow's Evangeline kissing the "dying lips" of her lover Gabriel. While Graves gives Borough-Johnson's specialty as "Domestic" in his 1895 Dictionary, in his 1905 Royal Academy of the Arts Dictionary Graves emphasizes Johnson's work as a landscape and genre painter. Bénézit notes Johnson's work as a lithographer, and mentions that this artist's productions have been on display at the Royal Society of Portrait Painters and the Royal Institute of Painters in Watercolours. In short, Ernest Borough-Johnson enjoyed a career that was at least the equal of Daniel Wehrschmidt's, although neither artist made the mark in the annals of nineteenth-century painting that Hubert Herkomer did, and no critic notes their work as illustrators.

That the Professor assigned Johnson six plates to Syddall's five suggests their chief's greater confidence in an artist who had demonstrated a greater pictorial acumen over the five years preceding the collaborative project. In The GraphicJohnson tends to adopt the style of illustration established by Herkomer, and some of his plates approach the quality of the master's. Further, the dimensions of Johnson's plates suggest that both Herkomer and Locker were pleased with his work, for only one of his plates, the meditative but rather undramatic vision of Tess lying on the grass (September 19th) is of the half-page format. In total, Johnson's plates occupy five-and-a-half pages of the magazine, only one page less than Wehrschmidt's eight plates. Perhaps the rank-ordering of Herkomer's esteem for his pupils' work is traceable in the order in which he had them follow his opening illustration: Wehrschmidt (July 18), Johnson (July 25), then Syddall (August 1 and 8).