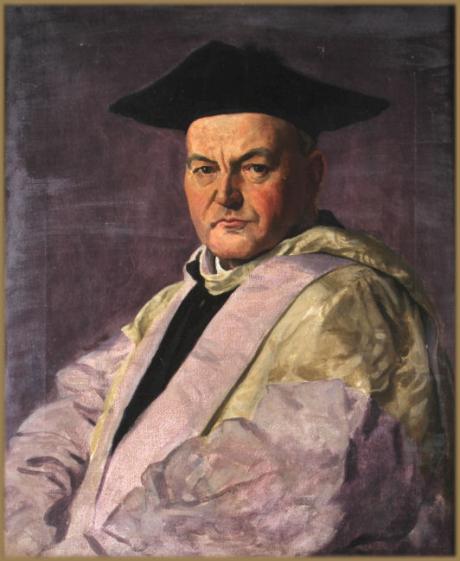 accompanied with a book   " Westminster Retrospective , A Memoir of Sir Richard Terry , by Hilda Andrews , Oxford University Press 1948, with dedication from his wife Jean F Terry.

Sir Richard Runciman Terry (3 January 1864 – 18 April 1938) was an English organist, choir director and musicologist. He is noted for his pioneering revival of Tudor liturgical music.

Richard Terry was born in 1864[2] in Ellington, Northumberland. At the age of 11 he started playing the organ at the local church. Educated at various schools in South Shields, St Albans and London. In 1881 Terry was living in Jarrow[3] and working as a Pupil Teacher. Terry then spent seventeen months as a non-collegiate person at Oxford (October 1887 to May 1889)[4] and two years at Cambridge (1888–90), where he went as a non-collegiate student but became a choral scholar at King's College, Cambridge.[5] There he also became a music critic for The Cambridge Review. At Cambridge, he was much influenced by the Professor of Music, Charles Villiers Stanford and the King's Chapel organist Arthur Henry Mann who taught him the techniques of choral singing and the training of boys' voices.[6]

Terry left Cambridge in 1890 without taking a degree. He was appointed School Master: Teacher of Music, Organist and School Choir Master at Bedford County School,] (renamed Elstow School in 1907 Kempston, Bedfordshire. Then organist at St. John's Cathedral, Antigua in 1892. Terry then taught and was Director of Music at Highgate School from September 1895 to December 1895. Terry became a Catholic in 1896, the year he was appointed organist and director of music at the Roman Catholic Benedictine Downside School in Somerset. It was here where he began the massively important work of reviving the Latin music of Tudor English composers such as William Byrd and Thomas Tallis. He was greatly inspired by the revival of Gregorian chant by Dom Prosper Guéranger at Solesmes Abbey in France, which was to be an important part of the Downside musical repertoire.

In 1899 Terry took his Downside choir to Ealing, for the opening of the new Benedictine church, where they sang William Byrd's Mass for Five Voices and motets by Palestrina, Philips and Allegri. The archbishop of Westminster, cardinal Herbert Vaughan, was the preacher on the occasion and he decided that he would have Terry as his Master of Music at the newly built Westminster Cathedral.

Terry's time at Westminster Cathedral was marked by admiration and praise, as well as frustrations. In 1911, he received a honoris causa degree of Doctor of Music at Durham University, and in the same year, during the International Music Congress, a special session was held in the Cathedral of early English church music, sung by the Cathedral Choir.

While Terry's relation with Cardinal Vaughan was excellent, it was less so with his successor, Cardinal Francis Bourne. Bourne's different view on church music, a continual shortage of financial means to support the choir, the decrease in the number of lay clerks during and after the World War I, together with Terry's engagements in other things outside the Cathedral led to a prolonged period of tension.

Terry was forced to resign from the Cathedral in 1924, after coming under increasing criticism for his erratic behaviour and neglect of duty (including neglecting administrative work, taking off without leave for weeks at a time, cancelling choir rehearsals without notice, dismissing Lay Clerks without proper procedure, taking on too many engagements outside his Cathedral work and tensions due to his inconsistent approach to congregational singing at the Cathedral). Nonetheless, during this time he was able to establish a choral tradition of great merit at the Cathedral, developing a repertoire of both Gregorian chant and polyphonic music. The choir's particular focus on renaissance polyphony is believed to have influenced the emerging school of 20th century English composers and the performance of church music in England.

The Grove Dictionary of Music and Musicians credits Terry with the revival of much English church music, including Peter Philips' Cantiones sacrae, Byrd's three and five part masses and Gradualia and Cantiones sacrae, Tallis' mass and lamentations, William Mundy's Mass Upon the Square and many motets by Thomas Morley, Christopher Tye and others. Much of this work resulted in his editing and publishing performing editions of this music including 24 motets in Novello's series of Tudor motets. He also published the first modern editions of Calvin's first psalter of 1539 and the Scottish Psalter of 1635. In 1912 he edited the Westminster Hymnal.

In 1921, in an obvious departure from his church music, he edited the Curwen edition of 'The Shanty Book (Part 1)'. The foreword was written by Sir Walter Runciman, acknowledging that the time of the shanty was over, along with sail-powered merchant ships. Terry's 'Introduction' gives an excellent insight into the shanty as the sailor's work song, deferring to the well-known shanty collection by Capt. W.B Whall 'Sea Songs, Ships and Shanties' (1910 & 1912), above other accounts written between 1887 and 1920. The collection of 30 shanties also includes explanations for their use at sea, and his extensive comments give us a deal of valuable information about a particular aspect of social and maritime history.

Following his resignation from Westminster Cathedral he went on to work as a musical editor, journalist and academic. He was the initial editor of the Oxford University Press series Tudor Church Music, although by the time this series was completed he had been ousted from the editorship.

Terry was also a composer of church music, most notably of hymn tunes, several of which are in use today, such as the popular Christmas carol Myn Lyking.

He was awarded a knighthood for his services to music in the 1922 Dissolution Honours.

Select bibliography
Catholic Church Music, 1907 (enlarged in 1931 as The Music of the Roman Rite)
Still More Old Rhymes with New Tunes, Longmans, Green & Co, 1912 (illustrated by Gabriel Pippet)
On Music's Borders, 1927
Voodooism in Music and Other Essays, a collection published in 1934

Edward Bainbridge Copnall was born in 1903 at Cape Town, South Africa. He was the son of the Edward White Copnall and nephew of the celebrated Liverpudlian portraitist Frank Thomas Copnall (1870-1948). Edward was raised at Horsham in Sussex and was educated at the Liverpool Institute and Skinners School, then trained at Goldsmiths’ College in New Cross, south London and at the Royal Academy Schools. He initially commenced his artistic career as a painter and at the age of 22, produced Whither (Horsham Museum). Executed in full-on Stanley Spencer mode, it portrayed a funeral and the crooked spire in the picture identifies the church as being St Mary’s Horsham. The painting depicts the commonplace and the nightmarish. A ghostly spirit flies from the coffin and a figure holds a skeleton and weeps tears of blood. Copnall encountered the carver Eric Kennington in 1927, forsook the paintbrush and took up the mallet and chisel. In 1938 he executed the Sight and Sound panels on the Warner Theatre, Leicester Square, London During the war, he worked as as a camouflage officer and was awarded an MBE. At the end of the war, was given a studio at the British School of Rome, where he painted portraits of senior officers. On his return from Rome, he was the headmaster of the Sir John Cass College of Art from 1945 to 1953. Further reliefs by him may be seen in Page Street, Westminster. They adorn the front of what is now a block of flats. but in 1952 was still a government building. He was awarded the silver medal of the Royal Society of British Sculptors for his large sculptured stag adorning the new Stag Place in Victoria. The sculpture is now at Maidstone, outside the Larksmeadow Centre. Perhaps one of Bainbridge Copnall’s best works is his statue Becket in the gardens of St Paul’s Cathedral in which he froze in time the death of the cleric St Thomas á Becket, murdered by royal command in 1170. Copnall also produced wood carvings depicting history of shipping for the Cunard liners QUEEN MARY and QUEEN ELIZABBETH, and engraved glass screens for the latter. In 1954 he sculpted the statue of the Burmese General Aung San. He was responsible for the splendid reliefs adorning the office building which occupied the site of the old St James’s Theatre. The subjects of the carvings ranged from Oscar Wilde, and Sir George Alexander to Lord Olivier and Vivien Leigh. The closure and demolition of St James’s theatre was something of a cause celebre in 1957 and there was a nationwide campaign to try to save it. Working with James Woodford, Copnall carried out a substantial amount of sculpture for the Royal Institute of British Architects building at 66 Portland Place, London. He served as President of the Royal Society of British Sculptors (1961-66). He was author of A Sculptor’s Manual, published in 1971, and Cycles: An Autobiography – The Life and Work of a Sculptor, published in 2001. His fibreglass sculpture Family Group at Billingham comprises a family linked in a ring. A shirtless father bends to reach the hands of a toddler, whilst the mother holds the youngest member of the family in her arms. It was inaugurated by The Queen on 19 October 1967. Following the unveiling, the Duke of Edinburgh is reported to have said to Councillor Bill Allen: ‘The man on the statue looks rather careworn. Did you pose for it ?’ Copnall was in the news on 6 January 2009 when the Daily Mail reported ‘A vicar has removed a sculpture of the crucifixion from the front of his church because it was a ‘horrifying depiction of pain and suffering’ and was allegedly scaring off worshippers. The Reverend Ewen Souter of St John’s Church, Horsham, West Sussex said the traditional Christian symbol was frightening children and that it would be replaced with a modern, stainless steel cross.’ Some of his congregation reacted angrily to the decision, one stating: ‘The crucifix is the oldest and most famous symbol of the Christian church. Pulling it down and putting up something that would look more at home on the side of a flashy modern shopping centre is not the way to get more bums on seats. Next they’ll be ripping out the pews and putting sofas in their place, or throwing out all the Bibles and replacing them with laptops. It’s just not right.’ The sculpture was subsequently presented to Horsham Museum, where a spokesman diplomatically said: ‘Thanks to the generosity of St John’s, we have been given the remarkable sculpture of Jesus on the Cross by Edward Bainbridge Copnall. The museum was keen to have the figure because it is a stunning example of Edward’s ability and skill as a sculptor.’