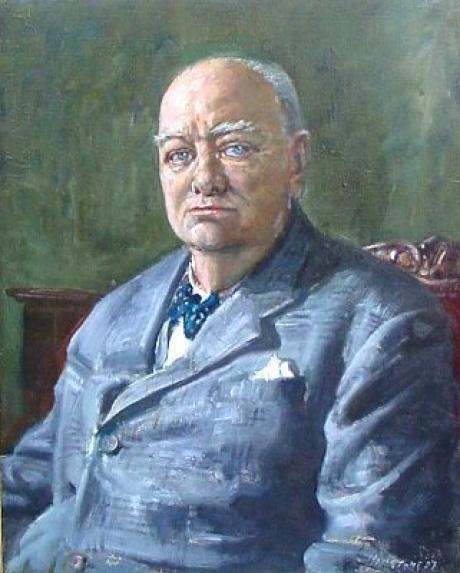 Winston Churchill, to son of Lord Randolph Churchill and Jennie Jerome, was born in Blenheim Palace, Woodstock on 30th November, 1874. Educated at Harrow and Sandhurst he became an officer in the Fourth Hussars. After leaving the army in 1899, Churchill became a war correspondent. On returning to England he wrote a book about his experiences. In the 1900 General Election Churchill was elected as the Conservative MP for Oldham. In 1904, unconvinced by his party leaders desire for change, Churchill decided to join the Liberal Party. In the 1906 General Election Churchill won North-West Manchester and immediately became a member of the new Liberal government as Under-Secretary of State for the Colonies. When Herbert Asquith replaced Henry Campbell-Bannerman as Prime Minister in 1908 he promoted Churchill to his cabinet as President of the Board of Trade. Following the 1910 General Election Churchill became Home Secretary. Churchill introduced several reforms to the prison system. Churchill became First Lord of the Admiralty in October 1911 where he helped modernize the navy. Churchill was one of the first people to grasp the potential of aeroplanes in war and in 1912 set up the Royal Naval Air Service. On the outbreak of war in 1914, Churchill joined the War Council. However, he was blamed for the failure at the Dardanelles in 1915. Unhappy about not having any power to influence the Government's war policy, he rejoined the army and commanded a battalion of the Royal Scots Fusiliers. When David Lloyd George replaced Herbert Asquith as Prime Minister, he brought Churchill back into the government as Minister of Munitions. He was in charge of the production of tanks, aeroplanes, guns and shells. After the war Winston Churchill served under David Lloyd George as Minister of War and Air (1919-20) and Colonial Secretary ( 1921-22). The divisions in the Liberal Party led to Churchill being defeated by E.D. Morel in the 1922 General Election. Churchill now rejoined the Conservative Party. Stanley Baldwin, the leader of the new Conservative administration, appointed Churchill as Chancellor of the Exchequer. With the defeat of the Conservative government in 1929, Churchill lost office. When Ramsay MacDonald formed the National Government in 1931 Churchill was not invited to join the Cabinet. He spent the next few years concentrating on his writing, including the History of the English Speaking Peoples. Churchill, a staunch critic of appeasement, was appointed as First Lord of the Admiralty on the outbreak of the Second World War. When Neville Chamberlain resigned in May, 1940, Churchill replaced him as Prime Minister. Churchill formed an all-party government that helped unite public opinion behind the war effort. He developed a strong personal relationship with President Roosevelt and played an important role in persuading the US to take part in the war against Germany and Italy. Although Churchill accepted plans for social reform drawn up by Lord Beveridge, his was unable to convince the electorate that he was as committed to these measures as much as Clement Attlee and the Labour Party. In the 1945 General Election Attlee won convincingly. Churchill became leader of the opposition and when visiting America in March 1946, made his famous Iron Curtain speech at Fulton, Missouri. He suffered the first of several strokes in August 1946 but this information was kept from the general public and continued to lead the Conservative Party. Churchill returned to power after the 1951 General Election. After the publication of his six volume, The Second World War, Churchill was awarded the Nobel Prize for Literature.. Churchill's health continued to deteriorate and in 1955 he reluctantly retired from politics. Winston Churchill died on 24th January, 1965.