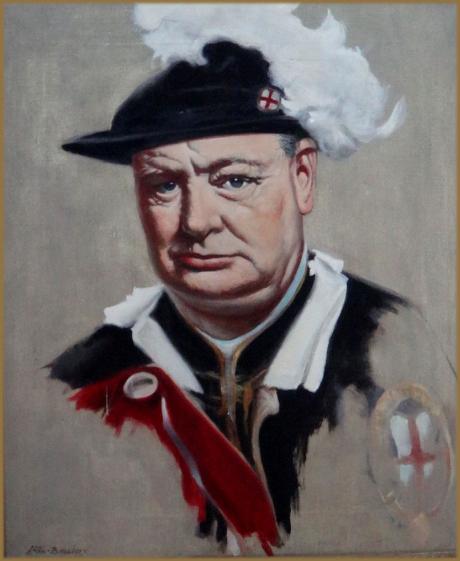 But in 1953 he relented and accepted the honour and was invested by HM Queen Elizabeth II as a Knight of the Garter. The installation, in St. George's Chapel Windsor, took place on 14th June 1954.

There is a theorey that The order of the garter was "Restored to gift of the Sovereign by Attlee in 1946". So maybe he wouldn't accept it from the Labour prime minister but would accept it from the monarch. What makes the most sense is that in 1945 he (actually his party) had just been voted out of office. At this point he still had hopes of getting back the majority (and perhaps the PM office), and in fact he did regain it in 1951.

So I think in 1945 he was mostly telling you what his problem was. He was still an active politician, and as such it would be next to impossible to accept such an honor without it being tainted by Great Britian's extant political climate. People could not help but speculate that there were crass political dimensions to the "honor".

In 1953 he was PM again. However, he was also 78, and suffered a fairly bad stroke, after which he never walked or spoke quite right again. He was clearly in his declining years, and in fact retired the PM position 2 years later. So at this point the logic that compelled him to decline the honor a decade prior no longer applied. Its also quite possible that, given his failing health, the soverign was a bit more insistent on giving it to him this time, for fear of any further wait causing it to have to be bestowed posthumously.

As customary on the death of a Knight of the Garter, Churchill’s Garter achievements (banner crest, helm and sword) were removed from his Garter stall in St George’s Chapel on the announcement of his death and a wreath was placed in his stall. The wreath remained in the stall until the presentation of Churchill’s banner to his family at Evensong on 5 April 1965. Churchill’s Garter stall plate remains on the stall as a permanent memorial of his membership of the Order of the Garter. However, it was not the only stall plate made for Churchill’s stall – the other one is now believed to be in private hands. How did this come about?

Sir Winston Churchill was nominated as a Knight of the Garter on 24 April 1953 and invested and installed over a year later, on 14 June 1954. However, the production and fixing of his stall plate were delayed by a long running dispute between the stall plate maker, Harold Soper, and the College of Arms. Soper produced a partially completed stall plate for Churchill’s installation ceremony in 1954, but removed it immediately after the ceremony ‘in its unfinished state’, replacing it with a cardboard dummy plate of Churchill’s quarterly arms and two crests. By 5 October 1954, Soper informed the Garter King of Arms, Sir George Bellew, that the stall plate was finished but refused to produce it or to submit an invoice. On 29 November, Bellew wrote to Soper: ‘Can you let me have the Churchill Plate? If you do not wish me to have it and refuse to send it you can scarcely blame me for having another one made elsewhere, but that seems to me a foolish waste’.

In 1957, at the end of his tether, Bellew attempted to find an alternative manufacturer of stall plates, not just for Churchill but also for the other Companions of the Garter who lacked plates. On 1 July 1957, he wrote to Canon Venables at Windsor, ‘After nearly six years of trying to bury the hatchet with the Sopers I have at last had to give it up … Do not worry I am having all the plates made elsewhere (the first of which is Attlee, put up a few weeks ago). Churchill should be next.’

The manufacturer chosen was engraver George T. Friend. However, Friend lacked the skills and experience of Harold Soper in working with enamel and therefore came up with an inferior product. When Friend sent Churchill’s plate to the College of Arms for approval, the Garter King of Arms commented that he was disappointed that the red used on the plate was not brighter and noted that some of the enamel in the engraved surround had already fallen out. Friend was apologetic, explaining in a letter written on 29 May 1957 that ‘the engraved lines will not hold enamel, it is a lottery chance, and each time it was fired the other colours suffered.’ Friend concluded, ‘I cannot do Churchill in time [presumably for the Garter service on 17 June 1957], all will have to come out, it means doing it again. I would rather be in disgrace for delay than bad work’. He eventually completed the plate and sent it to Garter on 14 January 1958 and in due course it was fixed to Churchill’s stall in St George’s Chapel. Friend went on to manufacture other stall plates for St George’s until his death in 1969 Field’s stall plate for Sir Winston Churchill What happened to the stall plate made for Churchill by Harold Soper? The plate was rediscovered in the effects of Miss Viola Soper at her death in 1989 and was auctioned with her other possessions. It fetched £6,000. In 1992 it reappeared at a Sotheby’s auction in Geneva, but did not reach its reserve price and was withdrawn from sale. It was put up for auction again in 2011 by Bonhams at an estimated price of between £10,000 and £12,000 and is, presumably, now in private hands. A photograph of Soper’s stall plate for Churchill which is included in P Begent and H Chesshyre, The Most Noble Order of the Garter: 650 Years (London, 1999) page 292 demonstrates the superiority of Soper’s work in design and execution. What a pity that it does not adorn the Quire of St George’s Chapel for which it was commissioned.

Happily today things are much improved for no Monarch would install a new Knight without seeking confidential confirmation from the leading politicians and clergymen of all persuasions. But the bestowal owes nothing to them, nor can they suggest to the Monarch that a Knighthood of the Order be granted. Still today the Monarch's decision as to who shall be, and who shall not be, one of the 24 Knights of the Order - is absolute.

After Churchill declined to The Dukedom of London, his new young Queen, in almost the first act in her reign, expressed her own - and the nation's - desire to honour Churchill. By knighting him and making him a member of The Most Noble Order of the Garter she conferred upon him the highest distinction that is possible for any Englishman to receive.

Churchill, who desired no honours, had said to his beloved wife Clementine when asked what memorial he would like said, "Oh, nothing - . . . then after a moments thought said " . . . perhaps just a Park for the children to play in".

Upon the news breaking that he was to be knighted he replied to a surprised friend "I only accepted, because I think she is so splendid" . . . yet another of his far sighted assessments - proved by the passage of time.

Sir Winston Churchill was the eldest son of the aristocrat Lord Randolph Churchill, born on 30th November 1874. He is best known for his stubborness yet courageous leadership as Prime Minister for Great Britain when he led the British people from the brink of defeat during World War II. Following his graduation from the Royal Military College in Sandhurst he was commissioned in the Forth Hussars in February 1895.  As a war correspondent he was captured during the Boer War. After his escape he became a National Hero. Ten month later he was elected as a member of the Conservative Party. In 1904 he joined the Liberal Party where he became the president of the Board of Trade.It was in 1910 he became Home Secretary where he worked with David Lloyd George. In 1911 he left the Home Office and became first Lord of the Admiralty. His career was almost destroyed as a result of the unsuccessful Gallipoli campaign during the First World War. He was forced to resign from the Admiralty. However, he returned to Government as the Minister of Munition in 1917. In this year he joined the coalition party in which he was a member until it collapsed in 1922 when for two years he was out of Parliament. He returned to the conservative government in 1924 and was given the job of Chancellor of the Exchequer. For ten years during the depression Churchill was denied cabinet office. His backing and support for King Edward VIII during his abdication were frowned upon by the national government. However in September 1939, when Nazi Germany declared war on Poland, the public supported him in his views. Once again Neville Chamberlain appointed him First Lord of the Admiralty on September 3rd, 1939.In 1940 Churchill succeeded Chamberlain as prime minister and during World War II he successfully secured military aid and moral support from the United States. He travelled endlessly during the war establishing close ties with leaders of other nations and co-ordinated a military strategy which subsequently ensured Hitler's defeat.His tireless efforts gained admiration from all over the world. He was defeated however during the 1945 election by the Labour party who ruled until 1951. Churchill regained his power in 1951 and lead Britain once again until 5th April 1955 when ill health forced him to resign. He spent much of his latter years writing (The History of the English-Speaking People) and painting. In recognition of this historical studies he received the Nobel Price for Literature in 1953 and in 1963 the US Congress conferred on him honorary American citizenship.In 1965, at the age of 90 he died of a stroke. His death marked the end of an era in British History and he was given a state funeral and was buried in St. Martin's Churchyard, Bladon, Oxfordshire. During all of his life he had served no less than six British monarchs: Queen Victoria, Edward VII, George IV, Edward VIII, George VI and Elisabeth II.

Born on the 17th September 1892 in Preston, Lancashire. He specialised in painting portraits, landscapes and marines on oil, watercolour and pastel and was an accomplished etcher and teacher at the Pembroke Lodge School and Wimborne Grammar School. He studied at the St. John’s Wood School of Art before being accepted at the Royal Academy Schools. In 1913 he is recorded as living at Bournemouth, then Parkstone, Dorset in 1915 before finally settling in Poole for many years. He served as a cadet in Mercantile Marine serving for them on the West African trade route, before taking up art. He studied art at St John's Wood School of Art and the Royal Academy Schools. It was then that he made several voyages on the barquentine ‘Waterwitch’ carrying coal and china clay from Cornish ports. The ‘Waterwitch’ was the last trading square rigger in British service at that time. He became an Associate of the Royal West of England Academy and exhibited there and widely elsewhere, mostly portraits. He first exhibited at the Royal Academy in 1913 a work titled ‘Iris’ and went on to exhibit fourteen works there. Examples of his work may be seen at the Liverpool and Brighton Public Art Galleries. He exhibited at the RA, RWA, RI and extensively at Walker's Galleries, and elsewhere. The Imperial War Museum and Russell-Cotes Art Gallery and Museum in Bournemouth hold his Work. He lived at Sandbanks, Poole, Dorset.