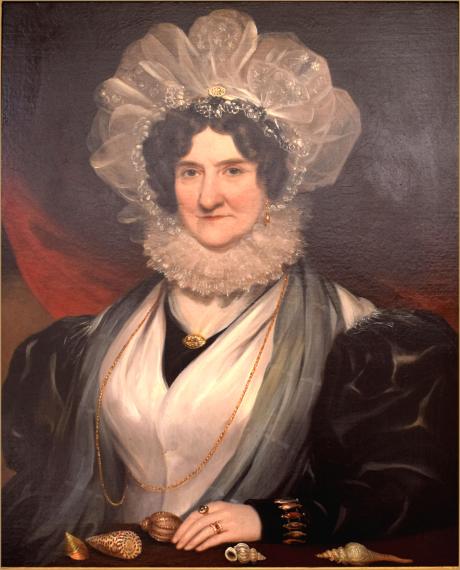 Throughout the nineteenth-century the mania for seashells steadily swelled; they featured on Christmas cards, and adorned countless keepsakes, jewellery, and furniture. The Gradgrind nursery in Charles Dickens’ Hard Times is equipped with a “little conchological cabinet, a little metallurgical cabinet, and a little mineralogical cabinet”, whilst, inspired by works of natural history, men and women scoured the seashore for conchological specimens. Conchology, unlike other branches of natural history such as zoology or mineralogy was easily accessible to everyone, and did not require specialist equipment. It also had the added bonus of including inanimate specimens that were not subject to disease or decay.

George Spratt’s composite caricature of ‘The Conchologist’ offers a personification of the craze – a woman, fashioned from shells of marine life, is depicted scanning the sea-side for her kin: her basket is filled with sprigs of seaweed and various tide pool treasures. Her rather ineffectual sun-bonnet looks to be crafted from the soft-bodied bell of a jellyfish, while a quasi-vulval cowry shell, disturbingly enlarged, makes up the lower half of her body.

The Shell Grotto in Margate, is perhaps the most impressive example of conchological worship. In 1835 an architectural love letter to the humble shell was uncovered by a man and his son attempting to dig a duck pond. The son, falling from a hole in the ground, recovered from his tumble to find a chamber ‘papered’ with an exquisite tapestry of shells. The chamber was connected to a labyrinthian passage similarly shrouded with cockles, whelks, mussels and oyster shells forming intricate mosaics. We still do not know how, or why the grotto came to be nor who is responsible for its creation.

Victorian women made use of their collection in various handicraft projects. Many put together imitation bouquets: using various miniature shells to create the desired flower.

Soon enough collectors, having exhausted the beaches of Britain, took to harvesting more impressive shells from overseas. An army of merchants, catering for the increasing demand, set up shop in London. The name of the global oil company “Shell” is, oddly enough, a reminder of the victorian love of conchology.

In 1833 one Marcus Samuel opened such a shop selling shells, curios, and other trinkets to natural history enthusiasts. By 1851 Marcus was described in the census as a ‘shell merchant’ and was listed as proprietor of ‘The Shell Shop’ in Houndsditch. He later formed the ‘Shell Transport and Trading Company.’ In 1882 his son (Marcus Junior) while travelling in the Caspian Sea, saw a potential for exporting oil from the region. He commissioned the world’s first purpose-built oil tanker and named the tanker the Murex, Latin for a type of snail shell, as a nod to the company’s beginnings. The first logo (1901) was a mussel shell, but by 1904 it was replaced with a scallop shell.

Conchology is now sometimes seen as an archaic study, because relying on only one aspect of an organism's morphology can be misleading. However, a shell often gives at least some insight into molluscan taxonomy, and historically the shell was often the only part of exotic species that was available for study. Even in current museum collections it is common for the dry material (shells) to greatly exceed the amount of material that is preserved whole in alcohol.

Conchologists mainly deal with four molluscan orders: the gastropods (snails), bivalves (clams), Polyplacophora (chitons) and Scaphopoda (tusk shells). Cephalopods only have small internal shells, with the exception of the Nautiloidea. Some groups, such as the sea slug nudibranchs, have lost their shells altogether, while in others it has been replaced by a protein support structure.

Molluscs have probably been used by primates as a food source long before humans evolved. Shell collecting, the precursor of conchology, probably goes back as far as there have been humans living near beaches.

Stone Age seashell necklaces have been found, sometimes in areas far from the ocean, indicating that they were traded. Shell jewellery is found at almost all archaeological sites, including at ancient Aztec ruins, digs in ancient China, and the Indus Valley.

During the Renaissance people began taking interest in natural objects of beauty to put in cabinets of curiosities. Because of their attractiveness, variety, durability and ubiquity, shells became a large part of these collections. Towards the end of the 17th century, people began looking at shells with scientific interest. Martin Lister in 1685–1692 published Historia Conchyliorum, which was the first comprehensive conchological text, having over 1000 engraved plates.

George Rumpf, or Rumphius, (1627–1702) published the first mollusc taxonomy. He suggested "single shelled ones" (Polyplacophora, limpets, and abalone), "snails or whelks" (Gastropoda), and "two-shelled ones" (Bivalvia). Many of Rumpf's terms were adopted by Carl Linnaeus. Rumpf continued to do important scientific work after he went blind, working by touch.

The study of zoology, including conchology, was revolutionized by Swedish naturalist Carl Linnaeus and his system of binomial nomenclature. 683 of the 4000 or so animal species he described are now considered to be molluscs, although Linnaeus placed them in several phyla at the time.[1] The English word "conchology" was coined in the 1770s by the British Sephardi naturalist Emanuel Mendez da Costa, who published The Elements of Conchology: or, an Introduction to the Knowledge of Shells in London in 1776.

There have been many prominent conchologists in the past two centuries. The Sowerby family were famous collectors, dealers, and illustrators. John Mawe (1764–1829) produced arguably the first conchology guidebook, The Voyager's Companion or Shell-Collector's Pilot as well as The Linnæan System of Conchology. Hugh Cuming (1791–1865) is famous for his huge collection and numerous discoveries of new species.[3] Thomas Say wrote the fundamental work American Conchology, or Descriptions of the Shells of North America, Illustrated From Coloured Figures From Original Drawings, Executed from Nature in six volumes (1830–1834).

R. Tucker Abbott was the most prominent conchologist of the 20th century. He authored dozens of books and was museum director of the Bailey-Matthews Shell Museum, bringing the world of seashells to the public. His most prominent works are American Seashells, Seashells of the World, and The Kingdom of the Seashell.

Many of the finest collections of seashells are private. John DuPont and Jack Lightbourne are known for their extensive collections. John DuPont donated his shell collection to the Delaware Museum of Natural History in 1984. Emperor Hirohito of Japan also amassed a huge collection, and was a competent and respected amateur conchologist.

Many museums worldwide contain very large and scientifically important mollusc collections. However, in most cases these are research collections, behind the scenes of the museum, and thus not readily accessible to the general public in the same way that exhibits are.

The largest assemblage of mollusc shells is housed at the Smithsonian Institution which has millions of lots representing perhaps 50,000 species, versus about 35,000 species for the largest private collections.

William Huggins, (1820–1884), animal painter, was born on 13 May 1820 in Liverpool, the son of Samuel Huggins and his wife, Elisabeth. He was the younger brother of the architect Samuel Huggins (1811–1885) and the brother of Anna Huggins (fl. 1854–1862)and Sarah Huggins (fl. 1853–1865), who both painted flowers, fruit, game, and landscapes, and exhibited at the Liverpool Academy and the Liverpool Society of Fine Arts. William was taught drawing at the mechanics' institute in Liverpool and at the age of fifteen won a prize there for an ambitious design, Adam's Vision of the Death of Abel.

Huggins spent many hours making life studies at the Liverpool zoological gardens. He was specially fascinated by the lions and tigers of Wombwell's travelling menagerie, and these he sketched whenever the opportunity allowed. His drawings in chalk and pencil, often on grey paper, displayed fine draughtsmanship; he worked equally well with watercolours and later oils. He never saw big cats in their natural environment and in consequence his backgrounds were understated. Their subtlety, however, served to focus all attention on the powerful depiction of the animals themselves. The influence of George Stubbs, which Huggins readily acknowledged, may be seen in an early painting of two pumas. As well as big cats, Huggins painted farmyard animals and was particularly successful with his drawings of donkeys and groups of cattle. Sentimental works, such as Faithful Friends, earned him the epithet the Liverpool Landseer, which he resented. When one of his patrons tried to pay him a compliment by comparing him to Landseer, Huggins allegedly responded: 'Landseer! If I had had Landseer through my hands for six months I could have made a man of him' (Marillier, 151).

About 1845 Huggins became disappointed with the response to his purely animal studies and for a short time diverged into works with grandiose biblical and literary themes. One of the best known is Fight between an Eagle and a Serpent, illustrating a passage from Shelley's The Revolt of Islam. However, these narrative works were not well received. Huggins was, however, a highly versatile artist, equally adept at landscape, architectural drawing, and portraiture. His portraits ranged from the small crayon and chalk heads of friends, to studies of large equestrian groups. A fine example of the latter is the painting of the master of Holcombe hunt, Mr T. Gorton, with a leash of hounds. Huggins was also skilled in painting ceramics and glass and was a collector of fine china.

In mid-career Huggins developed the highly individual technique that characterized some of his best work. Having first drawn a pencil outline on smooth white millboard he then glazed in oils 'very strongly and richly with transparent colours' (Marillier, 145). This allowed the white background to show through, creating a luminous effect. Huggins delighted in the translucency and proceeded to experiment with brilliant colours, which he fully anticipated would dull with time. The approach was not, however, universally admired. Some thought his colouring crude and inaccurate, and a purple donkey attracted particular criticism: 'No other animal painter of the school found in old Nature so many hues, or made so much allowance for the deepening tone given to dried paint by time' (Sparrow, 216). This mellowing effect was already apparent when Huggins's works were favourably assessed by H. C. Marillier some twenty years after the artist's death.

Huggins first exhibited at the Royal Academy in 1842 with Androcles and the Lion, and was a regular exhibitor until shortly before his death. His connection with the Liverpool Academy began when he attended as a student in the life class. He was elected an associate in 1847 and a member in 1850. His active connection ceased in 1856. He also sent works to exhibitions at Manchester, Dublin, Edinburgh, and Glasgow.

In 1861 Huggins moved to Chester, where he lived with his brother. It was presumably under the latter's influence that he took up architectural drawing, and he painted many views of the city. He developed a particular liking for its red sandstone, which featured prominently in his later work. In 1876 he left Chester for Betws-y-Coed, where he painted landscapes, including The Fairy Glen, exhibited in Liverpool in 1877. He later settled in the village of Christleton, Cheshire, where he died on 25 February 1884. In his last years he suffered partial paralysis, which eventually stopped him from painting. Of less than average height, with a florid complexion, Huggins had unusually long hair and dressed somewhat shabbily. He was good-natured and helped friends who were in financial straits, despite often facing difficulties himself. But he could also be shy and prickly.