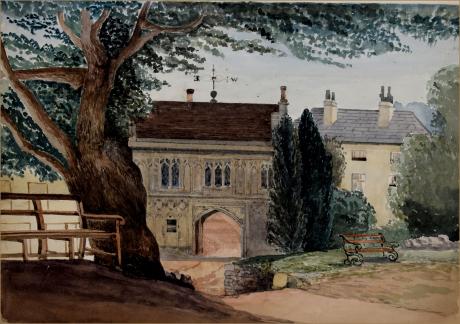 pencil and watercolour
24 x 34 cm.
Enquire about this item

The Priory Gatehouse had been the entry point for the Benedictine Priory of Great Malvern for several centuries before the monastery was surrendered to the Crown in 1539. Two hundred years later the building was being referred to as the Abbey Gateway, even though the monastery was a daughter house of Westminster Abbey and as such could never have assumed the title 'abbey'. The name however has persisted and the building is commonly known as the 'Abbey Gateway' or the 'Abbey Archway'. The gatehouse appears on the National Heritage List for England. This is a list of buildings of historical and architectural importance. It is listed under Planning (Listed Buildings and Conservation Areas) Act 1990 as amended for its special architectural or historic interest. Its list entry is Number: 1349407.

The gatehouse is also a Scheduled Ancient Monument. There are 3 in Malvern - the churchyard cross in the Priory churchyard, the moated site at Sherrards Green and the 'Priory Gateway'. Ours is Monument no. 258 - 'priory gateway'. Scheduling refers to the process through which nationally important sites and monuments are given legal protection by being placed on a list, or schedule. Historic England takes the lead in identifying sites in England which should be placed on the schedule by the Secretary of State for Culture, Media and Sport. Written consent must always be obtained from Historic England before work on a scheduled monument can begin.

As its name implies, the gatehouse was the route from the outside to the inside of the monastic enclosure. The earliest datable features of the building date from the late 15th century, perhaps around 1480, with a new stone building possibly replacing an earlier wooden construction.

Under the archway the following original features can still be seen: some of the original stone blocks (north of the gateposts),
ancient and huge oak timbers where the gates were hung (latest research suggests these gateposts date from c.1600),
the squint window where the porter checked incoming visitors.
In addition there are 64 encaustic tiles at the top of the east wall (similar to those in the priory church). These have been slowly deteriorating over the centuries. Lower down is an ornate window from the original 15th century construction.

At the end of the 16th century the building was extended on the south side. It is easy to see the difference in style and building materials between the 15th and 16th century constructions.

After the dissolution most of Great Malvern's monastic buildings were demolished. The most recent loss was the timber Guesten Hall, demolished about 1840. The Gatehouse by a miracle survived. The medieval fabric of the gatehouse can be best seen under the gateway and in the east wall, shown below. The picture shows the east end of Gatehouse with its Ogee window and encaustic tiles.

The east wall also shows the junction between the medieval work to the north (stone) and the Tudor work to the south (brick). The surviving Tudor structure is best seen in the south elevation.

The Malvern Museum in Great Malvern, the town centre of Malvern, Worcestershire, England, is located in the Priory Gatehouse, the former gateway to the Great Malvern Priory. The museum was established in 1979 and is owned and managed by the Malvern Museum Society Ltd, a registered charity. The Priory Gatehouse was a gift to the museum in 1980 from the de Vere Group, the owners of the neighbouring Abbey Hotel, and is staffed by volunteers. As such, the building itself is the museum's major exhibit.

Among the museum's exhibits are many local artefacts and archaeological findings dating from the Iron Age hill fort at the British Camp, to recent history. A series of rooms depicts different periods of history and include lifelike displays and information boards. Themes covered include natural history, Malvern Priory, Malvern Forest and Chase, life in Victorian Malvern, Edward Elgar, the Malvern Festival, the history of the local economy including the 19th century hydrotherapy using Malvern water (instrumental in the settlement's rapid growth from a village to a large town), the development of radar by TRE, and Morgan Motor Company cars.

Erroneously referred to as the Abbey Gateway, it was built around 1480 and is the second oldest building in Malvern after the Norman priory church. The gatehouse is the only other remaining building of the 12th century Benedictine monastery that was dismantled in 1539 during the Dissolution of the Monasteries by King Henry VIII of England.